The sharp disparities on the latest scores of the state's standardized test at San Antonio's 16 school districts fit a clear pattern.

Districts with higher percentages of poor households and English-language learners did worse on the State of Texas Assessment of Academic Readiness, or STAAR, taken last spring.

Educators and parents here called the numbers sobering but unsurprising. Several said poverty is only a catchall explanation affecting a host of factors bearing on students' readiness to take the test.

“Just because you are considered in a lower socio-economic group, it is not a death sentence,” said Susan Lewis, a teacher and math specialist who works with students in grades 1 to 5 at Meadow Village Elementary School in Northside Independent School District. “It's just going to be tougher, but these kids are just as capable as the others in any other district.” 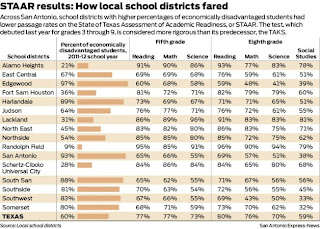 Northside's students did relatively well on the STAAR.

It's a higher-income, suburban district, although 88 percent of students at Lewis' school are tagged “economically disadvantaged” by the state — eligible for free or reduced-price meals, in most cases because they fit federal poverty standards.

Six miles away, in the heart of Edgewood ISD, poverty is a major roadblock to student success, said Pamela Reece, the principal at Roosevelt Elementary, a state “recognized” school. She recalled a kindergartener there who had to sleep in a car with his homeless mother.

“It's hard to know what to do to best help students who go home to no one,” Reece said. “The reality is that these students must first focus on basic survival, and sadly, that takes away from a focus on academics.”

Area school superintendents are using the STAAR results to back their arguments for increased state funding, a rollback of the high-stakes provisions of the test and more rigor in their own school practices.

But the scores are significant for another reason — unlike Austin or Dallas, where one school district takes in most of the city, the many districts in and around San Antonio show student performance at a “granular level,” said Patricia López, a research associate at the Texas Center for Education Policy at the University of Texas at Austin.

For example, passage rates for the eighth-grade social studies test — the lowest-scoring STAAR test statewide at 59 percent — are down in the 30s for four San Antonio districts with student poverty levels of more than 80 percent.
Other statewide test averages showing passage rates in the high 60s and 70 can be similarly misleading, López said.

“The aggregate always masks” the true picture, she said. “You have no idea who's pulling the average up and who's defining the lowest stratus.”

But the San Antonio numbers do provide an idea — and the implications are stark.
A state law requiring schools to hold back fifth- and eighth-graders if they fail the STAAR math or English language arts tests won't be enforced based on these latest scores — but will for the tests taken this spring, unless the Legislature changes it.

Another trend is at work. The Hispanic population is increasing in both the state and nation faster than other groups — and it tends to be more economically disadvantaged, said Rice University Professor Steve Murdock, a former state demographer and U.S. census director.
In other words, the population struggling the most with the STAAR is growing. The fate of minorities will predict how well Texas and subsequently the United States will do, he said.
“And how well they do — the most critical factor is education,” Murdock said.
Scoring S.A. students

Lackland Superintendent Burnie Roper said he was somewhat disappointed — more than 90 percent of his students typically pass standardized tests, but his fifth- and eighth-graders did that on only two tests this time.

He said educators were told to identify struggling students and invest more time, but “this is the hardest test we have ever seen.”

Alamo Heights ISD is property wealthy — although part of that money goes to the state to be distributed among poorer districts, officials there are quick to point out.
Roper thinks the notion that socio-economics determines outcomes is debatable, since several poor districts in Texas have done well on standardized tests.

About 97 percent of Edgewood's 14,000 students are economically disadvantaged. That's no excuse for low scores but it does help explain them, Superintendent Jose Cervantes said.
“This is exactly why we've been fighting in court, to get the same as other districts do because we need those resources in preparing our students and teachers for higher rigor,” he said.

Cervantes, a new superintendent when students took the STAAR last spring, already had told his board previous scores showed “we are not doing very well, folks.”

He created “war rooms” at every campus for educators to mull test scores and discuss how to improve them. Critics worry this is a prime example of “teaching to the test” but Cervantes said it produced steady progress on the benchmark tests students take to prepare for STAAR.

Edgewood provided free school supplies this year to every student and has embraced the theory that it must work with parents to provide students better home lives so they come to school better prepared.

Fast-growing Southwest ISD, with 83 percent of its students low-income, faces similar challenges. Superintendent Lloyd Verstuyft said administrators last year revamped curriculum to prepare for the test, but it will take time: “You have to get through the thorns to get to the rose,” he said.

State funding cuts forced it to drop after-school programs and in-school interventions to help its neediest learners, Verstuyft said, adding: “We can't do it on a budget that only allows us to open the doors in the morning and close the door in the afternoon.”
Verstuyft pointed out that Texas lets school districts decide if eighth-graders in high school math classes can choose to be tested at that level — which makes comparisons of eighth-grade math test scores unfair.

Ted Guerra's two daughters attend the Young Women's Leadership Academy in the San Antonio ISD. It excels academically, though 73 percent of its students are considered low-income.

Guerra thinks even poorer school districts can be dynamic, but he said it's easy to see differences in resources affecting local scores.

Wealthier districts can afford reading specialists and other auxiliary positions that help boost performance, and teachers migrate to districts offering better pay — “Just like we have to feed our families, they have to feed theirs,” Guerra said.

Low incomes don't determine failure, but they surely stack the cards, Nancy Gunter came to realize. She taught at Jackson-Keller Elementary School in Castle Hills, a North East ISD campus with a 93 percent low-income enrollment. Many of her students were behind.
A fourth-grader, she remembers, couldn't identify a triangle.

Parents juggling two jobs don't always have the time to prepare their kids, and when all but a handful are behind grade level, it's harder to get a class caught up, Gunter said.
An Alamo Heights ISD parent now, she thinks the perception that that district “is all white and it's all affluent” is too simplistic. Her daughter Claire will have to pass STAAR fifth-grade tests this year to advance to middle school.

“I know that our teachers have to work really hard,” Gunter said. “But I would have to guess that the number they would have to bring up to the standard is probably less than at other schools.”

“These aren't the scores that our colleges and universities are looking at, quite frankly,” he said. “I would caution anyone from reading too much into it, and that's coming from a superintendent whose school district did well.”
The Texas Education Agency is expected to announce a new accountability rating system for schools and districts next month. The current system has relied heavily on test scores. State lawmakers also have vowed sweeping reforms to testing and accountability, although key Republican leaders have made no similar promises to expand school funding.

The STAAR debuted only last year. Cervantes, the Edgewood superintendent, said it's somewhat unfair for districts to be judged harshly on scores that took almost a year to be released. Northside ISD Superintendent Brian Woods agrees.

“If we had gotten these scores last summer, this whole school year we could have been better targeting what's working and what's not,” Woods said.

“Many of these students are actually 'educationally' disadvantaged, which means they didn't get much reading or math skills at home,” Woods said. “Plain and simple, it takes more resources to get them up to speed.”

There is no single way to raise test scores, both Woods and Lackand's Roper stressed.
“If you went to talk to a fifth-grader or eighth-grader ... when you ask what they are learning, they are likely more to talk about their relationships with adults, their peers, athletics and what's fun about school,” Woods said. “Sadly, state tests could never convey that.