It feels like a long time since I've posted to this blog.  I was quite busy last week with the Mexican American Studies (MAS) court case in the state of Arizona's District Court, either preparing for, or actually serving as an expert witness on, the benefits of Mexican American, and Ethnic Studies, generally, in Acosta et al. v. Huppenthal et al.

It was a course for masters and doctoral students and a substantial portion of it involved the court case itself, giving my students a fairly intimate, inside look into what has been going on with Mexican American Studies in the Tucson Unified School District in Arizona since it was dismantled on January 1, 2012. This happened a month after the law took effect that you can read about here.  Just Google it.  There's lots of pertinent stories—on this blog, included.

It was a great experience for my UCB students, I feel, and important do do before the trial.  As a college student once myself, I certainly would have appreciated  a course like this one that gave students a veritable "front-row seat" to a precedent-setting, historic case.


Journalist María Camila Montañez, who writes this post-trial piece below, importantly notes that Judge Tashima will rule on this trial in a matter of weeks. Yay!


I am still processing the whole thing so I'm not sure what to say at the moment other than that we shall know in a few weeks, whether the side of justice, due process, and Constitutional rights and protections were won by what truly turned out to be an extraordinary effort by the expert witnesses, witnesses, legal team, and community.

I'll write more on this later, but for now, kudos to Attorneys Richard Martinez  and Luna Barrington from Weil, Gotshal & Manges LLP in Manhattan, NY, with whom I most closely worked in preparing for this trial. They are exceptional attorneys and great human beings.
The entire team was, of course, truly outstanding!

I was in great company as an expert witness with Yale History Professor Stephen Pitti and University of Arizona Professor Nolan Cabrera. It was interesting to fully grasp the fact that all three of us are not only Mexican American, but also Stanford University Ph.D.s and college professors who only came to know each other as a result of the case.  Stephen and I even over-lapped at Stanford but we somehow didn't get to know each other at the time. There are just so few of us Mexican Americans in academia to begin with, that the universe surely conspired to make this happen.

I was in Tucson Sunday through Thursday of last week.  It was all very intense, as you might imagine.  This is the culmination of a protracted 6-year, or longer, struggle.  So the trial's ending is a much-awaited-for respite for all, at the very least.

There were so many moving, powerful moments throughout such that as grueling as the experience of testifying was, it was all worth it.  I feel even more confident than I ever have, that the work that we do in Ethnic Studies is not only life saving, but it is also just as potentially powerful and transformative for whites as it is for people of color.  And for our youth, it promotes college-going, to boot!

Some day, I hope that what we teach will simply be regarded as "good education," la buena educación.  Regardless of the outcome, I am convinced, we are in the dawning of a new age, a new consciousness that has heretofore existed, unfortunately, only as subjugated forms of knowledge located at the margins of state curriculum, policies, and practice. This historic, legal challenge illuminates the vital importance of educator, student, parent, grandparent, and community advocacy for curricular inclusion like this noble and well-conceived attempt.

For me personally, the whole ordeal was an amazing, truly worthwhile experience.  It was great connecting with my dear friends in Tucson, Dolores, Nanie, Natalie Carrillo with sister Cal State San Francisco State University Professor Teresa Carrillo flying in from San Francisco to attend the trial and provide moral support. It was also special having Drs. Barbara Flores and Esteban Díaz from San Bernardino present.

University of Arizona Dr. Francesca Lopez' work, friendship, and support was vital to the case, as well.  Dr. Cesar Cruz Teolol also regularly attended the trial with his beautiful eight-year-old son, Amaru Agape, who reported regularly on the trial in his "All Power to the Kids News" broadcast on Facebook.  His regular reports, as his father shared, provided much needed, "good medicine," to the entire effort.  What a heart-warming highlight to know that the next generation will keep humanity on track!  You can hear what he said about my testimony here on Facebook.  I was so very impressed with, and humbled by, his report.

I see a traumatized, but resilient community.  I have witnessed admirable strength, commitment, and resolve.  Their main "problem" was unapologetically disavowing bigotry in their pedagogy and curriculum together with challenging all forms of institutionalized oppression—in order for their students to live life confidently and intelligently as skilled agents of change in a democracy.

This was a rigorous curriculum that helped students see themselves in an affirming way while opening their minds to a world of college-preparatory, intellectually stimulating texts and thought that spoke to their experience while helping them to simultaneously develop a strong, academic self-concept alongside an awareness of their own potentialities.  It helped them to feel part of the American story, nurturing that sense of belonging that is so woefully missing in so much of subtractive, K-12 schooling.

Arizona is the land of my maternal ancestors, my mother and grandmother with roots that go back to the Mexican Revolution and northern Mexico from the towns of Arizpe and Hermosillo, Sonora.  My family lived and worked in the mines of Bisbee and Morenci, where my grandfather worked by day, while working as a minister in a Baptist church in nearby Clifton by night, and on weekends.  My mother was born in Superior, Arizona, located north of Tucson near Apache Junction, where my grandfather also ministered.

My grandmother's grandmother was either Yaqui or Apache. Her name was Jesusita Yepes.  My grandmother graduated from Tucson High School as a fluent, English-Spanish biliterate that served her and her family well for the rest of her life. Our entire family is therefore a beneficiary of the great education that my grandmother received there in the early 1900s.

And Tucson is very much an indigenous space that renders it "contested terrain" even when things are going well—not unlike Texas and so many other places in the U.S. where we constitute little more, unfortunately, than a "demographic threat."  How lame this situation that we as a Latino community frequently find ourselves in, particularly when considering the amazing, indeed breathtaking, opportunities that are foregone with all that our communities and university-level, Ethnic Studies programs, have to offer!

On Friday, closing arguments were delivered and you may access the transcript here [pdf]. We are cautiously optimistic about this, but ultimately, it is Judge Tashima's decision.


Regardless, I will live the rest of my professional career and life with Arizona in my heart and mind. And I could not be more thankful or blessed. 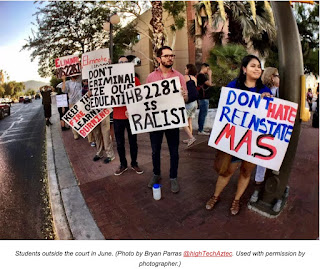 On Friday, the Mexican-American studies (MAS) trial in Tucson concluded without a ruling. U.S district Judge Wallace Tashima will make a decision in the next few weeks on whether the law was intended to discriminate against Latinos.
The 2010 law currently prohibits public schools to include ethnic studies in their curriculum that “promote the overthrow of the United States Government, promote resentment towards a race or class of people, are designed primarily for pupils of a particular ethnic group or advocate ethnic solidarity instead of the treatment of pupils as individuals.”
This was the second part of the two-week trial.
Former Attorney General Tom Horne testified on Tuesday, maintaining his position to keep the 2010 law that bans the MAS program and hoping it eliminates all ethnic studies at Arizona public schools, according to a story by HuffPost’s Roque Planas.
Horne was one of the authors of the law, along with former Superintendent John Huppenthal, who testified in June during the first part of the trial.
Lawyers defending MAS argued that Horne and Huppenthal specifically targeted the program unlike other ethnic studies.
Former Deputy superintendent Elliott Hibbs also testified on behalf of the state.
During the trial, the state questioned the program and its teaching of Che Guevara, according to witnesses in the courtroom.
Academic expert Dr. Angela Valenzuela, a professor at the University of Texas, testified in support of the MAS program. She spoke about the benefits that the classes bring to students. She mentioned research, showing students who took the MAS program performed better that those who did not.
People from around the country went to Arizona to support advocates of the MAS program.
Dr. Cesar Cruz Teolol drove from Los Angeles with his eight-year old son Amaru. During a phone interview with Latino Rebels, he said that “these programs should be championed. As an educator, it matters that every kid has the opportunity to learn their history and where they come from.”
Judge Tashima did not specify how many weeks it will take to make a final decision on the ban. He will be ruling in the “next few weeks.”
***
María Camila Montañez is a journalism student at CUNY Graduate School of Journalism’s Spanish-language program. She is originally from Colombia and tweets from @mariacmontanez.
Posted by Angela Valenzuela at 12:14 AM