Consider celebrating it beginning tomorrow at the  Emma S. Barrientos Mexican American Cultural Center (ESB-MACC) that is celebrating its 10-year anniversary. Check out this page for more information on this weekend's events.

Located at 600 River St. next to Rainey St. (off of Holly from I-35) on Town Lake in downtown Austin, the ESB-MACC is also home to Academia Cuauhtli.  Consider liking us on Facebook.  And consider joining us, as well! 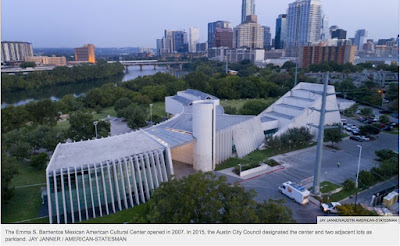 When the Emma S. Barrientos Mexican American Cultural Center opened its doors a decade ago, it realized a longtime community dream that some thought would never happen.

Now with increased visitor traffic and minimal space for additional cultural programming, the center — which turns 10 this weekend — eyes an expansion that could carve a future path for the city and Austin’s rising Latino community.

“When I think about the MACC, it can’t just be another small cultural facility, especially in Austin, Texas,” said Rick Hernandez, the center’s advisory board chairman who has more than 30 years of experience leading arts and culture groups. “Austin is too important, not just to Texas but to the nation as a whole.”

For the past year, the center has been working on updating its master plan and gathering community feedback. Next month, it’ll host a public meeting to discuss future visions for the center. 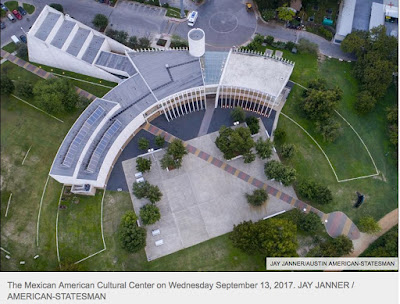 INTERACTIVE: Take a look inside the MACC

The master plan, originally crafted in 2000 with the intention of designing and building three phases of the center, was never fully realized. A decade later, the center — designed by the renowned Mexican architect Teodoro González de León, who died last year — is only one-third of its original vision. CasaBella Architects, the firm that helped develop the original master plan, is now back helping develop the new master plan.

Over the years, a lot has changed that’s made the 2000 master plan stale. While the center once sat in a residential area off of Rainey Street, it’s now surrounded by high-rise condominiums and bars. Then in 2015, the Austin City Council voted for the cultural center and two adjoining lots to be designated as parkland.

In the meantime, the center’s programs continued to evolve.

Since its opening, the cultural center has become a place where people feel ownership, a place where they could gather, gain skills, and learn about history and art, said Herlinda Zamora, the center’s culture and arts education manager. “There’s something special about what we’ve created here,” she said. “We’re a connection to community.”

RELATED: Preserving the history of the Mexican American Cultural Center

Adding a theater, additional parking, shade structures and a grand entrance are among the preliminary ideas for a revamped cultural center. A final public meeting to present concepts is planned for December.

To make the new master plan a reality, funding possibilities are being explored, including Mayor Steve Adler’s “downtown puzzle” proposal. That plan would leverage tourism dollars to address homelessness downtown as well as provide funds for cultural arts and historic preservation by increasing the city’s hotel occupancy tax and creating a Tourism Public Improvement District.

In a July interview with the American-Statesman, Adler said that about $50 million had been identified by the Visitor Impact Task Force for arts, cultural and historic projects such as the center, the Palm School and the Austin Downtown Alliance, but there’s been no breakdown of potential dollars in the proposal. Adler is expected to present his plan at a Mexican American Cultural Center advisory board meeting next week.

Other funding possibilities could include a bond election or public-private partnerships, Hernandez said.

The struggle for a cultural center dates back to the 1960s, when the rise of the Chicano movement helped spur local political activism. Over the decades, community-run cultural and neighborhood centers popped up such as the Juárez-Lincoln Center and El Centro Chicano. But both of these were destroyed. In 1978, El Centro Chicano was the victim of arson. The Juárez-Lincoln building was first firebombed in 1980 and then demolished in 1983.

In the past 10 months, the center has had more than 50,000 visitors, putting it on pace to eclipse the total attendance for fiscal 2015-16. Zamora said that more outreach would be needed outside of the center’s walls. She hopes to expand programming to libraries and senior centers for people who can’t easily get to the center.

“What’s so important about organizations like the MACC is that ultimately we can be the driving force to help people understand why where they come from is important,” Hernandez said. “Let’s complete (the center) and make it the best it can be.”

March 1975: Festival Flor y Canto II brings Chicano artists from all over the country to Austin. That’s where the first conversations are believed to have begun regarding the establishment of a cultural center for the local Mexican-American community.

August 1975: Juárez-Lincoln University, an independent Chicano college that many Chicano artists and activists embraced as a community space for cultural expression, holds a ribbon-cutting ceremony commemorating the opening at its new location at 715 E. First St.

December 1980: As the League of United Chicano Artists and other Chicano groups address the City Council, the Juárez-Lincoln building is firebombed.

1983: The Juárez-Lincoln building is demolished.

1993: The City Council directs the city manager to explore the possibility of renovating the Public Work facilities for cultural center use at 600 River St.

1997: CMACA Inc. is formed to plan, develop and manage the future of the Mexican American Cultural Center to be located at 600 River St. The Parks and Recreation Department Forestry Division is moved out of the building.

June 2000: The City Council votes to take a larger role in the management of CMACA, and some East Austinites request resignations of three of the four members of the board of directors.

November 2002: CMACA is replaced as the planning board. City Council creates an advisory board for the center. the Parks and Recreation Department provides support staff person to assist the board.

November 2005: Ground breaks for the center.

September 2007: The cultural center has its grand opening celebration.

More information: Visit austintexas.gov/esbmacc
Posted by Angela Valenzuela at 11:53 AM