Texas State Board of Education Is Poised for a First — a Good First, by Elaine Ayala

Join us on Wednesday, April 11 and let's make history. 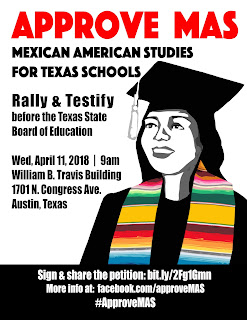 What: A press conference and rally calling on the Texas State Board of Education (SBOE) to #ApproveMAS
When: Wednesday, April 11, 8:30 a.m.
Where: William B. Travis Building, 1701 N. Congress, 78701 (located kitty-corner across the street from the Bullock History of Texas Museum)

Also, help us to reach our goal of 10,000 signatures on the Approve MAS Petition.

Here's the link to the petition:  http://bit.ly/2Fg1Gmn

For those of you who would like to testify at the Texas SBOE, please sign up to testify today here by 5PM today, in accordance with the Monday April 9, 2018 agenda of the SBOE.  I just did!

Texas State Board of Education Is Poised for a First — a Good First
By Elaine Ayala
April 8, 2018
This week the Texas State Board of Education could make history.
It could pave the way to a high school Mexican American Studies course, the first time specific state standards could be set for an ethnic studies class in Texas.
It would be a monumental step for a state whose board of education has been associated with non-academic decision-making, policy vetted not by educators but by religious conservatives and books filled with contorted views of history.
In endorsing the first ethnic studies class, Texas would better serve not only the 52 percent of its public school students who are Latino but all the rest who’ll get wider views of history, culture and societies.
At a time in history, when ample evidence exists that we can’t co-exist, that we can’t even talk about racism and are fearful of others, one class in Mexican American Studies represents not only what we need but the least we can do.
On Thursday, the board will hear about research showing ethnic studies improves student outcomes, resulting in better grade point averages and higher retention and graduation rates.
Such coursework can promote critical thinking skills and better self-understanding in relation to others, advocates say. The class can better prepare high school students for college and the workplace, where they must compete globally.
A “yes” vote would illustrate the board’s own progress, too.
It made a step in that direction in 2016 when it voted unanimously against a racist textbook on Mexican American history that was so non-academic and awful, on so many levels, it received national media attention. Last year, the board also rejected another MAS book that wasn’t ready for publication.
A textbook was never where to start, it’s where you arrive after establishing standards and curriculum.
Juan Tejeda, a retired professor at Palo Alto College who led its Mexican American Studies program, is more hopeful this time. He has served on the National Association for Chicana and Chicano Studies’ Tejas Foco Committee on MAS pre-K-12 that has for four years led this campaign.
Anything can happen, but momentum may be on their side, he says.
Four legislative bodies have joined them in urging the board to approve MAS standards.
The Mexican American Legislative Caucus, Texas Senate Hispanic Caucus, Texas House Democratic Caucus and Texas Senate Democratic Caucus last week sent a letter to the State Board of Education underscoring the success of ethnic studies courses.
The letter points to data from the San Antonio-based Intercultural Development Research Association and Stanford University, linking ethnic studies with better attendance and academics among students at risk of dropping out.
Some Texas districts are teaching MAS classes already, using general standards created for courses called “Special Topics in Social Studies or Independent Study in English,” according to the Texas Education Agency.
Some districts are teaching MAS under state-approved innovative courses, but standards will help spread the movement.
Districts and teachers in Houston, San Antonio, El Paso and the Rio Grande Valley have developed classes exploring the state’s indigenous, Spanish colonial, Mexican independence, Mexican American/Chicano and contemporary periods, Tejeda said.
But without standards in line with TEKS, overburdened teachers won’t sign up. Standards will help publishers develop texts and instructional materials, making it easier for districts to join in.
Studies show white and African American students benefit from MAS courses, too, said Tejeda. “It really opens them up to study their own culture and history in relationship to others.”
Last week, advocates established a petition encouraging the state board to approve standards. In just a few days, it received 2,500 signatures. It can be found here.
“This is one course only,” he said.
It can’t reverse rankings that put Texas schools in 40th place nationally. It can’t keep guns out of schools, or bullies for that matter.
But it can help some Texas students, and their state ought to give them that chance.
Elaine Ayala is a San Antonio Express-News staff writer. Read more of her stories here. | eayala@express-news.net | @ElaineAyala
Posted by Angela Valenzuela at 10:46 AM