Noam Chomsky: “We will overcome the coronavirus crisis, but we have more serious crises ahead of us”

We all would do well to heed the words and warnings of Dr. Noam Chomsky.  In Chomsky's words, I opt for  a "radical reconstruction of society and more humane terms, concerned with human needs instead of private profit." Neoliberalism is destroying the planet and thusly, our children's futures.  In contrast, "radical reconstruction" is anchored in democracy, workers' rights, and a healthy, positive orientation to the natural environment.

Thank you, Professor Chomsky for your much-needed voice and wisdom in this existential fight against, as you say, "the neoliberal plague" wherein the relentless attacks on government is part and parcel to the neoliberal agenda to hand over our futures to the market, to corporations, for each to fend for themselves.  We see this playing out before our very eyes right now as we see states compete for resources in the wealthiest nation in the world (read: Governors Fight Back Against Coronavirus Chaos: ‘It’s Like Being on eBay With 50 Other States’).

Do listen to the actual interview.  In reference to the potentiality of nuclear war, Chomsky notes that we can avoid this nightmarish future of "environmental catastrophe from which there is no recovery once we've gotten to that stage." The solution is to organize and to oppose neoliberalism and its ugly twin, authoritarianism. Thanks to Victor Huerta del Cid for sharing.

Noam Chomsky: “We will overcome the coronavirus crisis, but we have more serious crises ahead of us” 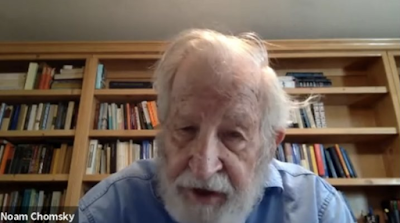 According to Chomsky, it is shocking that in this crucial moment Donald Trump is in the lead, whom he describes as a sociopath buffoon. “The coronavirus is serious enough, but it’s worth recalling that there are two much greater threats approaching, far worse than anything that’s happened in human history: One is the growing threat of a nuclear war and the other of course is the growing threat of global warming. Coronavirus is horrible and can have terrifying consequences, but there will be recovery. While the others won’t be recovered, it’s finished.”
The US power is overwhelming. It is the only country that when imposing sanctions on other states like Iran and Cuba, everyone else has to follow along. Also Europe that follows the master, Chomsky argues. These countries suffer from US sanctions, but nevertheless “one of the most ironic elements of today’s virus crisis is that Cuba is helping Europe. Germany can’t help Greece, but Cuba can help the European countries.” Adding the deaths of thousands of immigrants and refugees in the Mediterranean, Chomsky thinks that the civilization’s crisis of the West at this point is devastating.
Today’s rhetoric that refers to war is of some significance, according to Chomsky. If we want to deal with this crisis we have to move to something like wartime mobilization. For example the financial mobilization of the US for the Second World War, which led the country into far greater debt and quadrupled the US manufacturing and led to growth. We need this mentality now in order to overcome this short-run crisis and which can be dealt by rich countries. “In a civilized world, the rich countries would be giving assistance after those in need, instead of strangling them.” “The coronavirus crisis might bring people to think about what kind of world we want”.
Chomsky believes that the origins of this crisis a colossal market failure and the neoliberal policies that intensified deep socio-economic problems. “It was known for a long time, that pandemics are very likely to happen and it was very well understood, that there was likely to be coronavirus pandemic with slight modifications of the SARS epidemic. They could have worked on vaccines, on developing protection for potential coronavirus pandemics, and with minor modifications we could have vaccines available today.” Regarding Big Pharma, private tyrannies, which is impossible for the government to step in, it’s more profitable to make new body creams than finding a vaccine that will protect people from total destruction. The threat of polio ended with the Salk vaccine, by a government institution, no patents, available to everyone. “That could have been done this time, but the neoliberal plague has blocked that.”
The information was there, but we didn’t pay attention.
“In October 2019 there was a large-scale simulation in the US, in the world of the possible pandemic of this kind, but nothing was done. We didn’t pay attention to the information. On December 31st, China informed the World Health Organization of pneumonia and a week later some Chinese scientists identified it as a coronavirus and gave the information to the world. The countries in the area, China, South Korea, Taiwan, began to do something and it seems contained, at least for the first surge of crisis. In Europe to some extent, that also happened. Germany, which had move just on time, has a reliable hospital system and was able to act in its self-interest, without helping others but for itself at least to have a reasonable containment. Other countries just ignored it, the worst of them the United Kingdom and the worst of all was the United States.”
When we overcome this crisis somehow, the options available will range from the installation of highly authoritarian brutal States to radical reconstruction of society and more humane terms, concerned with human needs instead of private profit. “There is the possibility that people will organize, become engaged, as many are doing, and bring about a much better world, which will also confront the enormous problems, that we’re facing right down the road, the problems of nuclear war, which is closer than it’s ever been and the problems of environmental catastrophes from which there is no recovery once we’ve gotten to that stage, that it’s not far in distance, unless we act decisively.”
“So it’s a critical moment of human history, not just because of the coronavirus, that should bring us to awareness of the profound flaws of the world, the deep, dysfunctional characteristics of the whole socio-economic system, which has to change, if there’s going to be a survivable future. So this could be a warning sign and a lesson to deal with it today or prevent it from exploding. But thinking of its roots and how those roots are going to lead to more crises, worse ones than this”.
About the quarantine situation that today more than 2 billion people on the planet face, Chomsky points out that a form of social isolation has existed for years and is very damaging.
“We are now in a situation of real social isolation. It has to be overcome by recreating social bonds in whatever way can be done, whatever kind that can be helping people in need. Contacting them, developing organizations, expanding analyzation. Like before getting them to be functional and operative, making plans for the future, bringing people together as we can in the internet age, to join, consult, deliberate to figure out answers to the problems that they face and work on them, which can be done. It’s not face to-face communication which for human beings is essential. But it’ll be deprived of it for a while, you can put it on hold.”
Noam Chomsky concludes by saying: “Find other ways and continue with, and in fact, extend and deepen the activities carried out. Can be done. It’s not going to be easy, but humans have faced problems in the past”.

Posted by Angela Valenzuela at 8:23 AM