Be Wise and Be Warned: How Greenwich Republicans Learned to Love Trump by Evan Osnos

This authoritative piece written by Evan Osnos in The New Yorker should fully revise who we think of as a “Trump supporter.”  What frequently comes to mind are Confederate-flag-waving, gun-toting, working class Republicans whose support for Trump baffles most of us who do not support him.

In stark contrast, a longtime Greenwich resident himself, Osnos directs our attention elsewhere, that is, to the top one percenters, of the "multi-millionaire's and billionaire's club" of Greenwich, Connecticut, Republicans.  The former group gets the promises, the latter gets the bounty.  This bounty further includes the convenient decoys and weapons of mass distraction—that these conservative populist masses serve.

How it happened that they, the wealthy of recent history, turned their backs on responsibility or anything akin to the noble concept of the public good—a "quaint' idea for them, no less—is the focus of this account as follows:

"The story of Trump’s rise is often told as a hostile takeover. In truth, it is something closer to a joint venture, in which members of America’s élite accepted the terms of Trumpism as the price of power. Long before anyone imagined that Trump might become President, a generation of unwitting patrons paved the way for him. From Greenwich and places like it, they launched a set of financial, philanthropic, and political projects that have changed American ideas about government, taxes, and the legitimacy of the liberal state."

Greenwich Republicans always knew Trump was a vulgar, arrogant bully, but as Osno writes, they were seduced by what he could—and actually has done—for them.  Accordingly, Osno illuminates the chain of events that led to this brand of Republicanism that is anything but “runaway capitalism.”

If we think of Trump’s tax cut for the very wealthy and his continuing support in the form of a tax deduction “that was worth an average of $1.7 million for each of America’s forty-three thousand wealthiest taxpayers,” it’s inescapably calculated.  And these beneficiaries, the uber-wealthy, get theirs at the expense of ordinary citizens as maintained by Republican businessman and former IRS Chair Charles Rossotti who Osno cites as follows:

“From 1997 to 2002, has estimated that sophisticated tax ploys and shelters cause ordinary citizens to pay an extra fifteen per cent in taxes each year.”

According to a non-partisan think tank, namely, the Institute on Taxation and Economic Policy, Trump’s 2017 tax cut was an extravagant gift to the Greenwich elite that had earlier marshaled their resources to get him into office.

“On average, Trump gave households in the top one per cent a forty-eight-
thousand-dollar tax cut, while those in the bottom twenty per cent
received a hundred and twenty dollars, according to the Institute on
Taxation and Economic Policy, a nonpartisan think tank.”

My final thoughts in reflecting on this truly eye-opening read is just how dangerous this teeny-tiny, albeit obscenely wealthy slice of the U.S. electorate is and how it shows not a scintilla of regret with respect to their ever-unfolding agenda to hold on to their power and way of life.  Sadly, Osno writes, the ordinary people of Greenwich, despite their protests, got word of “deep cuts to the town’s education budget, citing the economic effects of the pandemic.”

For us Texans, make no mistake: We are witnessing the playing out of a ruthless, insatiable neoliberal—and ultimately, a racist, sexist, and classist agenda that seeks to reinscribe white, male power and hegemony.

As per a May 6, 2020 story published in the Houston Chronicle, the Greenwich crowd, plans an unprecedented push into Texas politics to influence the outcome of various elections, including conservative democrat, Henry Cuellar, who's "safe" for them and less than helpful to progressives.

Shame on Representative Henry Cuellar for taking money from the Koch Brothers' Super PAC in order to win his race against Jessica Cisneros, an immigration and human rights lawyer.  His district runs from McAllen to San Antonio and includes Laredo (see map).

People, please take notice of all these things.  Let's show our strength and get him out of office! Support progressive candidates and oppose the Koch/Greenwich Republicans' agenda. They don't care about our country or our livelihood.  They're only in this for themselves.

They are the invasive species that has literally made us vulnerable to the Coronavirus disaster that we in the U.S. and the whole world is tragically enduring (read: Trump's staff cuts have undermined Covid-19 containment efforts, watchdog finds).

This is a long read, however, if you go directly to the story, you can listen to it on your own, as well. 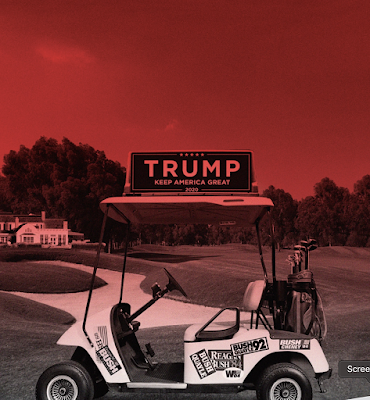 How Greenwich Republicans Learned to Love Trump
To understand the President’s path to the 2020 election, look at what he has provided the country’s executive class.
By Evan Osnos
May 3, 2020
Prescott Bush, the father and grandfather of future Presidents, was the eight-time club champion on the golf course at the Round Hill Club, one of eight country clubs in Greenwich, Connecticut. Bush was a staunch believer in standards; he required his sons to wear a jacket and tie for dinner at home. He was tall, restrained, and prone to righteousness; friends called him a “Ten Commandments man.” In the locker room at Round Hill, someone once told an off-color joke in front of his fourteen-year-old son, George H. W. Bush, and Prescott stormed out, saying, “I don’t ever want to hear that kind of language in here again.”
In Greenwich, which had an unusually high number of powerful citizens, even by the standards of New York suburbs, Prescott Bush cast a large shadow; he was an investment banker, the moderator of the town council, and, from 1952 to 1963, a United States senator. In Washington, he was President Eisenhower’s golf partner, and the embodiment of what Ike called “modern Republicanism.” Prescott wanted government lean and efficient, but, like Nelson Rockefeller, the New York governor whose centrism inspired the label Rockefeller Republican, he was more liberal than his party on civil rights, birth control, and welfare. He denounced his fellow-Republican Joseph McCarthy for creating “dangerous divisions among the American people” and for demanding that Congress follow him “blindly, not daring to express any doubts or disagreements.” Bush could be ludicrously aristocratic—he had his grandchildren call him Senator—but he believed, fundamentally, in the duty of government to help people who did not enjoy his considerable advantages. He supported increasing the federal minimum wage and immigration quotas, and he beseeched fellow-senators, for the sake of science, education, and defense, to “have the courage to raise the required revenues by approving whatever levels of taxation may be necessary.”
Long after Bush died, in 1972, his family stayed central to the community of Greenwich Republicans. His son Prescott, Jr., known as Pressy, served as the chairman of the Republican Town Committee; alumni of the Bush Administrations still live around town. Each year, the highest honor bestowed by the Connecticut Republican Party is the Prescott Bush Award.
When Donald Trump ran for President, he was hardly a natural heir to the Greenwich Republican tradition. In the eighties, he bought a mansion on the town’s waterfront, but he did not often observe the prim Yankee ethic inscribed on the Greenwich coat of arms: fortitudine et frugalitate—courage and thrift. Locals were embarrassed by the house’s gilded décor, and, after he and his wife Ivana divorced, she sold it. When George H. W. Bush called for a “kinder, gentler nation,” Trump responded, “If this country gets any kinder or gentler, it’s literally going to cease to exist.” In early 2016, even before Trump was asserting his right to “locker-room talk,” he was denounced in Greenwich Time, the town’s daily newspaper, by Leora Levy, a prominent local fund-raiser. “He is vulgar, ill-mannered and disparages those whom he cannot intimidate,” she wrote. Levy—the latest winner of the Prescott Bush Award—was lending her support to Prescott’s grandson Jeb Bush, the former governor of Florida.
But not everyone in Greenwich was excited about Jeb. Jim Campbell was the chairman of the Republican Town Committee. The Campbells, like the Bushes, had deep roots in town. Jim prepped at Exeter and graduated from Harvard and Harvard Law School, before working in Europe and returning home as a real-estate executive. On a fall evening, Campbell attended a reception for Jeb Bush at the Belle Haven Club, a private tennis-and-boating club overlooking Long Island Sound. Jeb was expansive and mild, which struck Campbell as precisely wrong for the political moment: “He gave a whole talk about a woman named Juanita in South Florida, and how ‘immigration is love,’ and I just looked at the people I came with and said, ‘Does he think he’s already the nominee? He’s running in a tough Republican primary, and just because we’re at the Belle Haven Club doesn’t mean we’re all voting for him.’ ”Continue reading here.

Published in the print edition of the May 11, 2020, issue, with the headline “The Greenwich Rebellion.”

Evan Osnos joined The New Yorker as a staff writer in 2008 and covers politics and foreign affairs. He is the author of “Age of Ambition: Chasing Fortune, Truth, and Faith in the New China.”

Posted by Angela Valenzuela at 12:35 PM