We're opening our state much too early, the doctors tell us.  But to no avail...

A Mother's Day Coronavirus outbreak is getting forecast here.  What a horrible thought!

Perhaps a picnic instead of going out to eat this year.  Just a thought.

The plan deviates considerably from what many public health officials say is needed for Texans to reopen businesses.
BY
R.G. RATCLIFFE
DATE
APR 28, 2020 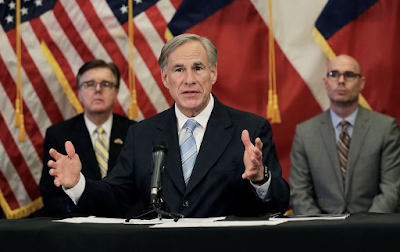 Governor Greg Abbott announces at an April 27 news conference that he would relax some restrictions imposed on businesses because of the COVID-19 pandemic.
In an upbeat news conference Monday, Governor Greg Abbott announced that all Texas restaurants, retail businesses, and movie theaters will be able to partially reopen for business by this weekend if they follow his guidelines. He insisted, as he’s done for weeks, that his reopening plan is based on “doctors and data,” and not the considerable political and business pressure that has been brought to bear upon him. The time has come to lift restrictions, the governor said, because “the COVID-19 infection rate has been on the decline over the past seventeen days.”
Abbott’s sunny assessment of the state of the pandemic, however, is at odds with the state’s COVID-19 data. According to the Texas Department of State Health Services website, there was a spike in reported infections on April 10, to 1,441 new cases, the most reported to date. On April 9, there were 877 new cases and on April 11 there were 890—and the number of new infections has held relatively steady ever since. On Friday there were 862 new reported cases. If Abbott had picked for his reference point any date other than the outlier of April 10, he could not plausibly state that the “infection rate has been on the decline.”
Despite the dearth of testing in Texas—which still ranks forty-sixth among the states in COVID testing per capita—reported cases are still rising in some communities. Collin County, north of Dallas, reported 30 new cases on Friday, up from 17 on Tuesday. Tarrant County, with Fort Worth at its center, saw a swing from 101 new cases reported on Wednesday to 150 on Thursday. The county health department lists the risk of community spread as “substantial.”

Thank you for reading Texas Monthly