This fact sheet is a great source for California voters.


CALIFORNIA’S LATINO POPULATION IS GROWING RAPIDLY.
More than one in three Californians is Latino—a total of about 14 million residents.  In 2000, the U.S.
Census Bureau designated California as the first large “majority‐minority” state, with non‐Hispanic
whites representing just under half of the state’s population.  By 2020, Latinos are expected to
outnumber non‐Hispanic whites in the state; and by about 2042, Latinos are projected to become
the racial/ethnic majority in the state.

LATINOS ARE THE LEAST LIKELY TO REGISTER AS INDEPENDENTS; MOST IDENTIFY AS DEMOCRATS …
More than six in 10 Latino likely voters are Democrats (64%), while 18% are registered as
Republicans and 18% as independents (“decline‐to‐state”) or with a third party.  Whites lean
somewhat more Republican than Democratic (42% to 37%), Asians lean somewhat more
Democratic than Republican (38% to 32%), and blacks are mostly Democratic (74%). Latinos are the
least likely to report that they are independent (14%); Asians are the most likely (28%). 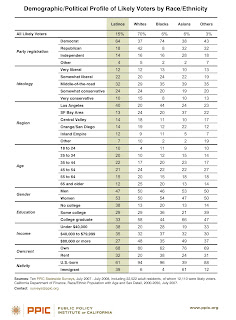