We're proud of our policy intern, Diana Gomez, pictured here in this article advocating on behalf of Texas' children, education, and an inclusive curriculum. Way to go Diana! 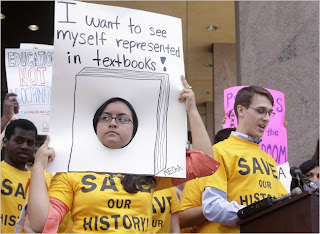 AUSTIN, Tex. — Even as a panel of educators laid out a vision Wednesday for national standards for public schools, the Texas school board was going in a different direction, holding hearings on changes to its social studies curriculum that would portray conservatives in a more positive light, emphasize the role of Christianity in American history and include Republican political philosophies in textbooks.

The hearings are the latest round in a long-running cultural battle on the 15-member State Board of Education, a battle that could have profound consequences for the rest of the country, since Texas is one of the largest buyers of textbooks.

The board is expected to take a preliminary vote this week on a raft of changes to the state’s social studies curriculum proposed by the seven conservative Republicans on the board. A final vote will come in May.

Conservatives argue that the proposed curriculum, written by a panel of teachers, emphasizes the accomplishments of liberal politicians — like the New Deal and the Great Society — and gives less importance to efforts by conservatives like President Ronald Reagan to limit the size of government.

“There is a bias,” said Don McLeroy, a dentist from College Station who heads up the board’s conservative faction. “I think the left has a real problem seeing their own bias.”

The three-day meeting is the first time the board has met since voters in last week’s Republican primaries voted to oust Dr. McLeroy and another conservative and threw the future makeup of the board up in the air. Two other members — a conservative Republican and a moderate Democrat — are not seeking re-election, and it is unclear what the balance of power will be after the general election. At present, the seven hard-core conservatives are often joined by one or more moderate members in votes on curriculum questions.

Dr. McLeroy still has 10 months to serve and he, along with rest of the religious conservatives on the board, have vowed to put their mark on the guidelines for social studies texts.

For instance, one guideline requires publishers to include a section on “the conservative resurgence of the 1980s and 1990s, including Phyllis Schlafly, the Contract with America, the Heritage Foundation, the Moral Majority and the National Rifle Association.”

There have also been efforts among conservatives on the board to tweak the history of the civil rights movement. One amendment states that the movement created “unrealistic expectations of equal outcomes” among minorities. Another proposed change removes any reference to race, sex or religion in talking about how different groups have contributed to the national identity.

The amendments are also intended to emphasize the unalloyed superiority of the “free-enterprise system” over others and the desirability of limited government.

One says publishers should “describe the effects of increasing government regulation and taxation on economic development and business planning.”

Throughout the standards, the conservatives have pushed to drop references to American “imperialism,” preferring to call it expansionism. “Country and western music” has been added to the list of cultural movements to be studied.

References to Ralph Nader and Ross Perot are proposed to be removed, while Stonewall Jackson, the Confederate general, is to be listed as a role model for effective leadership, and the ideas in Jefferson Davis’s inaugural address are to be laid side by side with Abraham Lincoln’s speeches.

Early in the hearing on Wednesday, Mr. McLeroy and other conservatives on the board made it clear they would offer still more planks to highlight what they see as the Christian roots of the Constitution and other founding documents.

“To deny the Judeo-Christian values of our founding fathers is just a lie to our kids,” said Ken Mercer, a San Antonio Republican.

The new guidelines, when finally approved, will influence textbooks for elementary, middle school and high school. They will be written next year and will be in effect for 10 years.

In other testimony Wednesday, Hispanic activists asked that more Latino figures be written into the social studies curriculum, particularly early residents of Texas who fought the central government in Mexico when Texas still was part of Mexico. American Indians complained that their history had been given short shrift.

Many other people came to the meeting to support the conservative slate of amendments, including some people enraged at what they saw as socialist tendencies in Washington. One man asserted that the Tea Party movement should be included in the textbooks.
Posted by Dr. Patricia D. López at 11:00 PM

Email ThisBlogThis!Share to TwitterShare to FacebookShare to Pinterest
Labels: curriculum, Texas State Board of Education