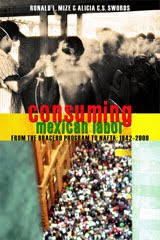 Dear Colleagues,
We are thrilled to announce the release of our new book, CONSUMING MEXICAN LABOR http://www.utppublishing.com/product.php?productid=2741&cat=143&page=1 , with University of Toronto Press.
 
Consuming Mexican Labor: From the Bracero Program to NAFTA

Mexican migration to the United States and Canada has a long and very fraught history, and remains a highly contentious issue in the eyes of many North Americans. Consuming Mexican Labor covers the time period from the Bracero Program (1942-64) to the North American Free Trade Agreement (NAFTA) to demonstrate how Mexicans have been actively encouraged to migrate northward when labor markets are in short supply, only to be turned back during economic downturns.
The book is divided into three parts: the first looks at the Bracero Program and the subsequent backlash against Mexican farm workers in the United States; the second part looks at attempts by Mexican immigrants to organize effectively and resist exploitation; and the final section offers a contemporary look at Mexican communities across the continent, from traditional areas like California and the American Midwest to less traditional areas like the American Southeast and Canada. The result is a comprehensive and up-to-date look at how consumption needs in North America have significantly shaped the ebbs and flows of Mexican migration.

"In the dismal shadow of Arizona and idiot nativism, this wonderful book reminds us of who turns the wheels of the North American economy and how their empowerment might save us all."
-- Mike Davis, University of California, Riverside, and author of No One is Illegal and In Praise of Barbarians


“In this stunning, authoritatively researched book, Mize and Swords move beyond the typical binaries and inspire readers’ heads and hearts with a persuasive vision of transformational politics that empowers people. Reaching deep into the history of how we got into such perilous trouble, and going far beyond throwing more money at the border, temporary worker programs, and increased criminalization strategies, Swords and Mize offer a brilliant, practical, and wholly attainable way forward. This book is a must-read for anyone serious about fixing the immigration crisis.”
--Ashley Judd, Actress, Advocate, Harvard Kennedy School MPA ’10, Board of Directors, Population Services International


“Consuming Mexican Labor ranges across regions and decades to reveal patterns that do not emerge from more narrow temporal and spatial approaches. By exposing the previously occluded connection between increasing consumer demand for goods and services and the exploitation of immigrant labor, Mize and Swords help us see how racist beliefs and actions concern interests, attitudes, and property as well as pigment, power, and prejudice.”
-- George Lipsitz, University of California, Santa Barbara, and author of The Possessive Investment in Whiteness
Posted by Angela Valenzuela at 6:37 PM