The Worst of Times: Children in Extreme Poverty in the South and Nation 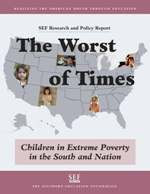 The Worst of Times: Children in Extreme Poverty in the South and Nation

The SEF report also finds that:

• School districts with high concentrations of extremely poor children have a disproportionately large enrollment of students of color—primarily African Americans and Hispanics.

• School districts with the largest reported percentages of extremely poor children appear to have the least money to educate these children in the schools.

• Local, state or federal policies in education fail to specifically address the needs of the nation's poorest children.

Download PDF document here.
Posted by Angela Valenzuela at 5:15 AM

Email ThisBlogThis!Share to TwitterShare to FacebookShare to Pinterest
Labels: poverty