Graduation, retention rates at two-year schools lag behind those of four-year universities.

When it comes to enrollment, community colleges in Texas are on a tear.

The number of students attending public two-year schools, including community and technical colleges, surged 12.2 percent to 692,845 from 2008 to 2009, according to the most recent state-certified figures. In contrast, enrollment at public universities grew just 4.5 percent to 532,226.

The Texas Higher Education Coordinating Board expects community college enrollment to continue rising at a fast clip because of the schools' varied work force and academic offerings, open admissions policies and tuition rates that are a fraction of those at four-year schools.

The growth comes as community college funding is being cut sharply to help address a multibillion-dollar shortfall in the state budget. That, in turn, is putting pressure on governing boards to raise tuition and property taxes. 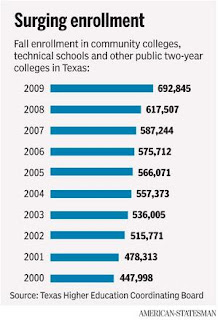 • Only about 30 percent of students who enroll full time at two-year schools to pursue a degree or certificate achieve that goal within six years. The six-year graduation rate for the state's public four-year universities is almost twice as high.

• Nearly half of students who enroll in community colleges right after graduating from high school are not prepared to do college-level work in one or more areas, with math the most common deficiency. And of those who take remedial, or developmental, courses in math, reading or writing, most don't end up taking a college-level course, much less passing one.

• Two-year schools have lower retention rates than their four-year counterparts, with 67 percent of community college students continuing their studies after the first year, compared with 88 percent at universities.

Some observers worry about community colleges' expanding share of the enrollment pie.

A four-year school not only offers a better statistical shot at earning a degree but also the chance to absorb broader, life-enriching exposure to the arts, economic issues, global affairs and so forth, said Lisa Fielder, executive director of College Forward, an Austin-based nonprofit that helps low-income students apply to college, obtain financial aid and stay enrolled. Of the 283 College Forward students who began postsecondary studies this fall, 80 percent enrolled in four-year schools.

"We encourage our students to attend schools where they have the very best chances to be successful in the least amount of time," Fielder said. "But we are not dogmatic in this."

David Gardner, deputy commissioner of the Higher Education Coordinating Board, said he doesn't find the enrollment trends at community colleges worrisome. He said community colleges are attractive to many students for reasons of cost and access. Moreover, community colleges serve a wide demographic, including working adults, students with families and part-time students.

Randal "Splash" Vela is one of the stars in the community college firmament. The odds were stacked against him when he enrolled at Austin Community College in the spring of 2009. He had been out of high school for more than 20 years. He needed developmental training in math and writing. He lacked confidence in his study skills.

Cronin became a kind of all-purpose mentor and sounding board for Vela, who got four A's on his first report card and soon landed part-time work as an Intersections peer instructor. The one-time developmental math student now hopes to transfer to Texas State University and become a middle school math teacher.

"I surrounded myself with support," the 40-year-old Vela said. "But you have to dig for it, and most students don't have the fortitude to dig for what they need. It needs to be put in the forefront as a schoolwide function."

Many higher education leaders agree. Indeed, the state coordinating board recommended in a November report that schools require student-faculty consultations, tutoring and participation in study groups.

The coordinating board also urged lawmakers to create financial incentives for community colleges to boost academic performance. Instead of doling out state tax dollars based on enrollment, which is the current practice, the Legislature would adopt a pay-for-performance model for a portion of the money.

Under such a model, community colleges would be rewarded when students pass developmental classes, complete their first college-level math and English courses, and earn certificates and degrees. The intent is to get the colleges to ramp up academic advising, developmental education and other student-focused services.

Additional support is especially needed for the growing population of students who are the first generation in their families to attend college, said Martha Ellis, associate vice chancellor for community college partnerships at the University of Texas System.

"You have to provide all of the information for these students," said Ellis, a former president of Lee College, a two-year school in Baytown. "They don't have anyone else to ask. They don't even know what questions to ask."

It will be difficult for community colleges to maintain academic support programs, much less expand them, in light of the state's budget woes.

The state is facing a possible shortfall of $24 billion in the next two-year budget, and community colleges — like four-year schools — have had to submit plans for a 10 percent trim, on top of 7.5 percent in cuts from the current budget.

Lawmakers might well impose reductions much greater than 10 percent during the legislative session that begins in January.

ACC President Stephen Kinslow said he hopes to avoid layoffs and reductions in student-support services by cutting back on technology and capital spending. The college would need voter approval to raise property taxes and isn't planning to pursue that, he said.

Tuition is another story.

"I think it's clear that tuition will have to be increased," Kinslow said, adding that he doesn't know by how much.

If budget problems persist, the school would eventually have to thin its instructor ranks and scale back programs and services.

"We're being asked to do a great deal more with a great deal less," Kinslow said. "It's not a good recipe for success and for meeting the state's goal of ensuring a qualified work force."
Posted by Dr. Patricia D. López at 1:56 AM