Students chant in the University of Texas' Main Building to protest proposed budget cuts to programs within UT's College of Liberal Arts on Wednesday. About 150 students and faculty members participated in a 2 1/2-hour rally. See more photos of the protest with this story at statesman.com. 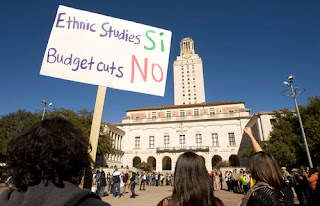 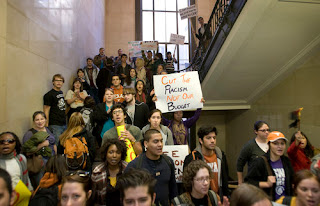 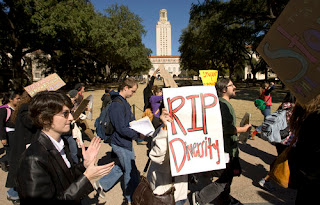 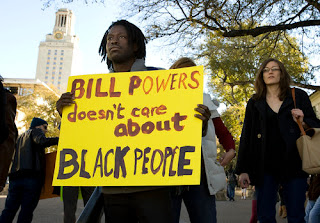 UT police officials estimated that 150 people participated in the rally. UT officials described the protesters, who included some faculty members, as peaceful. There were no arrests.

Still, protesters' feelings ran fairly hot on a campus where challenges to the administration tend to be low key, in contrast with some University of California schools, where rallies in recent months against tuition increases have turned violent, and in sharp contrast with Italy, where police in riot gear tangled Tuesday with students upset about tuition increases and education cutbacks.

Among the signs and chants at UT: "Let's just face it. These budget cuts are racist."

The protesters focused on proposed cuts for a dozen or so centers and institutes dealing with ethnic, women's and gender studies at UT's College of Liberal Arts. Jerome Bump, an English professor, said he was surprised when a college faculty panel recommended cuts for African American and Mexican American studies. He noted that the administration has pushed to increase diversity in student, faculty and staff ranks in recent years, and he said the budget proposals undercut that commitment.

Kaye Crawford, a senior majoring in African studies, agreed. "If you are recruiting these students and then you tell them that their heritage and the teaching of that heritage is not important, it sends all of us a mixed message," Crawford said.

Richard Flores, senior associate dean of academic affairs for the College of Liberal Arts , said officials plan to scale back the proposed cuts for the Center for African and African American Studies and the Center for Mexican American Studies. Flores said UT President William Powers Jr. had previously told college officials that the proposed cuts — 41 percent for each of those units — were too deep for programs that are priorities for UT.

The College of Liberal Arts, UT's largest academic unit, is in belt-tightening mode because state leaders have ordered universities and state agencies to trim spending by 5 percent in the current budget and submit plans for an additional 10 percent cut for the two-year budget period that begins in September 2011.

The college's portion of the spending reductions amounts to $3.3 million, Flores said. To allow for merit pay increases of 1 or 2 percent, officials want to reduce spending by $3.75 million.
Posted by Dr. Patricia D. López at 9:47 AM