Important observations of the superintendency in light of the broader context in Texas:

These changes are in great part motivated by changing demographics, as well as due to a growing appreciation and understanding of just how crucial, in particular, it is for our cities and school districts to get it right with Latinos since they are the demographic whose well-being are important to an economy. 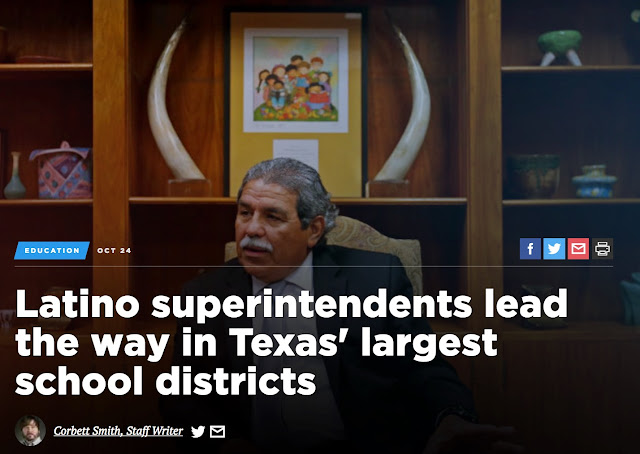 
When Richard Carranza was named superintendent of Houston ISD on Aug. 18, he addressed those in attendance in English and Spanish. Hired from San Francisco, the 49-year-old Carranza grew up in Tucson, the grandson of Mexican immigrants. When he entered elementary school, he didn't speak English.
After his short speech, Carranza — an advocate of Mariachi programs at every stop along his educational career — broke into an old standard, "El Rey," with an ensemble made up of Houston ISD students behind him.
His hiring is but one voice in a louder chorus.
For the first time in Texas, four of the state's largest six school districts — Houston, Dallas, Austin and Fort Worth — have Latinos at the helm.
The quartet in power is not only an indicator of the demographic transformation Texas has undergone over the past two decades, but the strides Latino educators have made, too.

“With 62 percent of the students in Houston being Latino, being Hispanic, I think it’s important for those students to see in the superintendency somebody who looks like them, somebody that perhaps comes from their background, and spoke only Spanish when they entered school,” said Carranza. “I think it’s just important to have role models, and if I’m honored enough to be considered a role model for those students, then so be it.”


‘THE FUTURE IN TEXAS’

The rise in Latino educators at all levels — from teachers to principals to superintendents — reflects the demographic shift that’s been occurring in the state over the past two decades. Texas’ current K-12 public school enrollment is 52 percent Latino, up from 40 percent in 2000.
“The [population] shift has been seismic for Texas,” said Stan Paz, executive director of the Texas Association of Latino Administrators and Superintendents. “And it’s not happened without people and districts noticing it.”
Even so, only 97 of the 1,012 school districts in the state (9.6 percent) were led by Latinos in 2015-16, according to data from the Texas Education Agency. Nevertheless, the prevalence of Latino superintendents is greater in larger districts. Of the 100 largest districts in Texas, 28 have a Latino educator at the helm.
“Not only do we have some of the largest [districts] being led by Latinos, but they are quality,” Fort Worth ISD superintendent Kent Paredes Scribner said. “In Texas, we have both quality and diversity. You need to have both.”
Paz attributed the unequal distribution among large and smaller districts to two factors: the explosive population growth in the Rio Grande Valley, an area where Latino administrators are traditionally more prevalent, and that districts in the urban centers of Dallas/Fort Worth, Austin and San Antonio are becoming more diverse in their hiring practices.
“Urban centers have been quicker to respond to shifting demographics,” Paz said.
In the Dallas area, in addition to Dallas and Fort Worth, Irving and Arlington have Latino superintendents: Arlington’s Marcelo Cavazos was recently named the state’s Superintendent of the Year by the Texas Association of School Boards.
Nationally, less than 3 percent of schools have Latino superintendents; Texas and California — the two states with the largest Latino student populations — have been pioneers in hiring Latino educators, Paz said.
If Texas education is going to thrive in the coming decades, Paz said, it is essential that leaders understand and educate the state’s Latino population.
“Clearly, the future in Texas in public education is Latino students,” he said.

When Austin ISD superintendent Paul Cruz was a child, his family moved from the nearly exclusively Latino community of Robstown to a white-majority district on the outskirts of Corpus Christi.
Nearly four decades later, Cruz, 51, vividly recalled the discrimination — both open and covert — that he and his family faced. Bilingual students were dissuaded from speaking Spanish, called “rude.” Black and Hispanic students were often clustered in lower- and mid-level classes, while the more rigorous classes were nearly all white.
On the first day of school, Cruz’s older brother, Carlos, was walking into an algebra class when he was diverted by a teacher.

“This isn’t Fundamentals of Math,” she said — assuming Carlos was enrolled in an introductory course.
“We talk about it today,” Cruz said. “It still stays in you. All of that to fast-forward to today, kids also talk about that. Why is there disparity between students because of their skin color, because of their background or because they speak another language?
“Having been treated differently, I see how that can be very harmful for a student ... how low expectations can affect a student. We’re not going to be that type of organization.”

This blend of cultural competency, empathy and expectations helped Cruz become Austin ISD’s first Latino superintendent in 2015, promoted from an interim role.
“I do think that diversity needs to be represented — I absolutely believe that,” he said. “To me, if I was the one who brought that diversity, it’s a good thing.”
When Michael Hinojosa returned for his second stint as Dallas’ superintendent, Hillcrest senior Edward DeLeon said he and his family were happy with the change.
Not only would Hinojosa — a Sunset graduate — know the lay of the land in DISD, but being Latino, he was aware of the challenges the district’s Latino students faced and would be better positioned to help them, DeLeon said.
“I know he wants children from Mexico to rise up and do something different,” he said.
A son of Mexican immigrants, DeLeon has thrived in Dallas ISD; the senior has designs to attend Rice University next year, with law school to follow.
But not all his classmates have been so fortunate. The school’s student council president said he sees the struggles of recent immigrants from Mexico and Central America, how difficult it is for them to assimilate and succeed academically.
“They are always in their own group, only speak the language they were born with ... it’s hard to actually learn English in such a short period of time,” DeLeon said.
Fort Worth’s Scribner — whose father is from Bar Harbor, Maine, and mother is from Coatzacoalcos, Veracruz — said it was critical for Texas educators to view these students, English-language learners, with “an asset perspective.”
“They are not problems that need to be solved, but assets that need to be invested in,” he said. “Having leaders who are culturally competent — perhaps who also might have the linguistic ability to interact with the students who are in their schools — is essential.”


'TRYING TO PAY IT FORWARD'

For Hinojosa, the strides Latino educators have made over his career have been revelatory, he said.
Initially, Hinojosa couldn’t get an interview to become an assistant principal in Dallas, serving as a teacher and coach at Adamson for seven years. Instead, he went to Grand Prairie, where he became the district’s first Latino administrator as an assistant principal in 1987.

In a span of a decade, Hinojosa went from that position to superintendent at Fabens ISD, at the time a “97 percent Hispanic district, seven miles from the border, with seven Hispanics on the board.”
With the help of mentors like Paz — whom he met at Fabens when Paz was El Paso’s superintendent — and the changing demographics that made Latino administrators more sought-after, Hinojosa jumped from district to district, eventually ending up back in his hometown.
In an intriguing twist, Paz also served as inspiration and adviser to Carranza, during Paz’s two stints as a high-level administrator and later superintendent of Tucson Public Schools when Carranza was a student and young teacher.
“I didn’t see a lot [of Latinos], but there were enough that gave me the vision that, well, maybe I could go that route one day,” Carranza said.
Paz said it’s critical to cultivate similar relationships with young teachers and administrators to develop a farm system of talent in smaller markets, ready to be “called up to the big leagues.”
While it is far from reflecting the state’s current student demographic makeup, the number of Latino principals and teachers has been on a steady rise over the last decade, according to TEA figures. Nearly 26 percent of Texas teachers and 23 percent of principals are Latino.
Paz’s group, TALAS, is hoping to target talent in the state’s big markets as well as the Rio Grande Valley, and encourage prospective leaders to be more mobile, taking jobs in smaller districts in areas vastly underrepresented by Latinos, such as East Texas. He also hopes to expand the role of Latinas in administration; according to Paz’s numbers, only 16 Latinas hold superintendent-level positions statewide.
“There’ve been so many obstacles that have been placed in front of Dr. Hinojosa and others like myself,” Paz said. “I’m just thankful that I’ve lived long enough to see people like Michael or Richard Carranza in those leadership roles. I’ve just been trying to pay it forward ever since.”

Posted by Angela Valenzuela at 11:13 PM