What's the difference between Hispanic, Latino, and Spanish?

This short primer by Kat Lazo is helpful and provides some orientation to
the identities of U.S. Latinas and Latinos—or Latino@s—relative to the whole.

Brazilians are "Latino" (or "Latinx"  [see below]), and not Hispanic.
"Hispanic" is also inclusive of folks emanating from Spain which by implication
suggests its limits as an identifier for "Hispanic-origin" U.S. minorities.
For many, the history of Spanish colonization, genocide, and hegemony
makes it distateful as an identifier but which exists largely as a result of the
1980 census enumeration that opted to categorize U.S. Latin@s as "Hispanic"—
yes, a creation of the U.S. government that people today largely think of
as so normal that they think it came from "the people."

That said, a number of New Mexicans identify as "Hispanos," because of their own
unique history.  This is unto itself another narrative altogether.  You can
read a critical piece on this by Erik Loomis here: Monday, September 22, 2008
Racism and the Construction of Hispano Identity in New Mexico.  As with any subgroup, complexity within itself prevails. 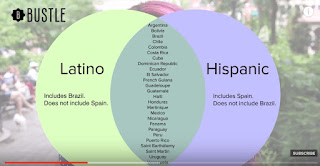 Another resource is this one on Wikipedia titled, Hispanos of New Mexico.

Many "Nuevo Mexicanos" intermarried/intermixed with indigenous natives and are also referred to, by scholars, as "Indo-Latino," according emphasis to the indigenous aspect of "Latinidad" (or "Latin@-ness").

"Mestiza" or "mestizo," emphasizing hybridity in terms of blood mixture and identity are frequently preferred self-referents for folks in the U.S. and Mexico.  Some express concern that "mestiz@" privileges Caucasian or European identity because it equates as a term to a loss of indigenous identification.

A central message of the Kat Lazo video is that identity is very much caught up with the shared experience of Latino colonization.

Today, you also might see "Latinx." This is a new term that is preferred by many  as a gender-neutral alternative to the gendered "Latino" (masculine) or "Latina" (feminine) self referents.

As with all Romance languages emanating from Latin, the entire Spanish language is gendered so there are clear limits to the linguistic goal by some of gender neutrality. In any case, identities and language are always evolving particularly among our youth and so it's good to know how
and why. In this vein, here is a good piece by Tanisha Love Ramirez on the matter that I hope, in addition to the video, you will enjoy, as well.  Why People Are Using The Term ‘Latinx': Do you identify as “Latinx”?

For another time.  Hope you find this helpful.

c/s [which means "con safos," by the way as a Chican@ alternative to the copyright "@" sign]

Posted by Angela Valenzuela at 2:31 PM