Thurs., Jan. 12, 2017 -- Immigrant Defense Project (IDP) and Center for Constitutional Rights (CCR) announce the online release of our new Defend Against ICE Raids and Community Arrests: A Toolkit to Prepare and Protect Our Communities and web page compilingthe latest efforts to uphold the rights of immigrants in the Trump era of racialized policing. 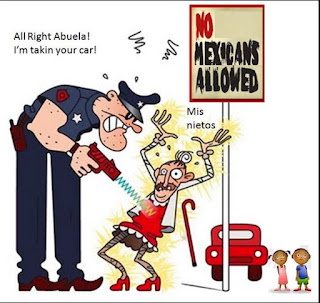 Based on years of community defense, litigation, and research, including hundreds of accounts of ICE raids, our joint #stopICEcold toolkit offers social justice advocates, lawyers, and community members critical information on our country’s massive detention and deportation system, as well as straightforward ideas on preparing for new waves of Immigration and Customs Enforcement (ICE) raids. Defend Against ICE Raids and Community Arrests is the first comprehensive guide and organizing resource to help fight back against the Trump administration’s stated efforts to criminalize and deport millions of people.

·  Definitive information on who ICE targets for deportation, priority locations for ICE activity, and common ICE arrest tactics and strategies.
·  Recommendations on emergency preparedness for those at risk of deportation, individual rights during ICE encounters, and potential legal and community challenges to ICE raids.
·  An initial forecast of what might happen under a Trump administration based on years of monitoring the world’s largest detention and deportation apparatus.
·  Select internal DHS/ICE enforcement memos and training documents secured through a pending FOIA litigation -- as well as summaries of raids reported.

Help spread the word:
·  Use #stopICEcold to promote on Twitter and Facebook. Follow IDP and CCR to stay connected to campaign developments, including updates and added materials.

·  #ICEraids will be key tactic in #Trump plan to deport millions. Here’s a new toolkit to help fight back bit.ly/2jliVnS #stopICEcold

Sample Facebook Post:
·  New from our partners at the Immigrant Defense Project and Center for Constitutional Rights: Defend Against ICE Raids and Community Arrests:  A Toolkit to Prepare and Protect Our Communities is the first comprehensive guide and organizing resource to help communities fight back against the Trump administration’s efforts to criminalize and deport millions of people. Based on years of community defense, litigation, and legal research, including hundreds of first-hand accounts of ICE raids, this toolkit gives folks on the ground the information they need to understand the mechanics of the world’s largest detention and deportation system, and how it might behave with Trump at the helm. Download and share the #stopICEcold toolkit here: bit.ly/2jliVnS. Additional resources here: bit.ly/2j8iBex.