There is a fundamental misunderstanding among Arizona leadership of what "La Raza" means.  It does not mean race, but "people," or "the people."  Race relations scholarship clarifies that all groups, by definition, are ethnocentric.  "Ethnos" is a Greek term for "people."  "Ethnology" is the study of people and how their characteristics are distinct and overlap.

Donald Noel is a sociologist who posits, based on his own scholarship, that the problem is not ethnocentrism itself—since all groups are, by nature, ethnocentric. Instead, the problem is extreme ethnocentrism.  That is not what we are seeing in TUSD's Mexican American Studies curriculum Arizona even if they have previously used "Raza Studies" as a self identifier.

Instead it was a well conceived, college-preparatory, compassionate pedagogy that served those children and youth well—and to which all the available evidence squarely points (see previous blog posts on this).  I should know.  I was an expert witness in the case.

It is tragic that the state ended an excellent program that was graduating students and sending them on to college in record numbers.

At the end of the day, officials'—as well as official—action was caught up with a decision to not empower them—and in fact, to disempower them by dismantling the program.  Shameful and sad.

I am hopeful that Justice Tashima rules on the side of justice—which includes the right to live in an open society where all of our communities can be free to study "the American experience," if you will.

Do read this excellent piece for an update on the MAS Trial.  And thank you, Roque Planas, for doing your due diligence as a conscientious and honest journalist.

POLITICS
08/08/2017 05:46 am ET | Updated 15 hours ago
A Judge Is About To Rule Whether Banning Mexican-American Studies Is Constitutional
Arizona Republicans accused teachers of stoking racial discord. But the law they passed in response may violate the Constitution.
By Roque Planas
ARNIE BERMUDEZ 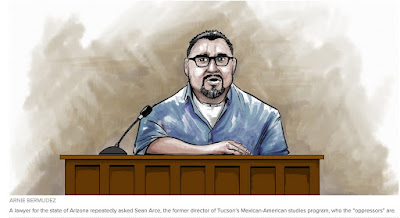 Posted by Angela Valenzuela at 10:58 PM