Houston Schools Chief: Many Students Will Lose Everything

"Out of 325 schools and administrative buildings, about 45 have some water damage, Carranza says, including a handful that have experienced “significant flooding.”

"The Texas AFT has set up a disaster relief fund for impacted teachers, where they can apply for aid to help cover home damage, ruined cars, care for injuries from the storm and lost school materials. It’s also mapped out how to deliver clean water and other supplies to affected areas once the storm subsides."

Also, do consider making a donation to the Red Cross at:

Our thoughts and prayers are with you, Houston.

-Angela
Houston Schools Chief: Many Students Will Lose Everything 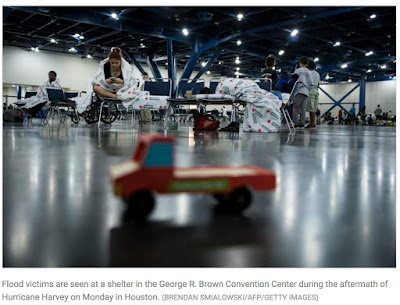 Officials have delayed starting school for at least a week as Houston is pummeled by Harvey.


Houston Schools Chief: Many Students Will Lose Everything

Flood victims are seen at a shelter in the George R. Brown Convention Center during the aftermath of Hurricane Harvey on Monday in Houston. (BRENDAN SMIALOWSKI/AFP/Getty Images)


“Thank goodness it seems like we’re pulling through, but the flooding is not over yet,” says Richard Carranza, superintendent of the Houston Independent School District. “Probably the most obvious thing is we’ve had to call off the whole first week of school, but our first concern is the safety of our students, teachers and community.”


Monday was slated to be the first day of school for Houston's public school system, which serves about 215,000 students – 76 percent of whom are economically disadvantaged.


At least nine other school districts in proximity to Houston also have canceled classes until next week, including the Alvin, Channelview, Cypress-Fairbanks, Humble, Klein, Pearland, Spring, Stafford and Waller school districts.


Carranza says his district – the largest in Texas and the seventh-largest in the U.S. – is working hand in hand with city and county officials in response to Harvey, which hit the Texas coast last week as a Category 4 hurricane and is now a tropical storm.


School facilities in and around Houston are operating as shelters. Carranza says a handful of libraries are also being used as makeshift shelters, and that the school district’s bus fleet is being used by emergency response officials to transport people to Houston's main shelter site at the George R. Brown Convention Center.


The Federal Emergency Management Agency expects the storm to drive 30,000 people into shelters. The rain in Houston isn't expected to cede until Thursday or Friday.


Out of 325 schools and administrative buildings, about 45 have some water damage, Carranza says, including a handful that have experienced “significant flooding.”


“We felt really good, at least at the beginning, about mitigating some of the flooding,” he says. “I think we’re at a place now with the continued rain, it’s just so much that’s it’s almost impossible to keep up with.”


Carranza says the start of school may be delayed further, depending on the rainfall over the next 72 hours, the assessed damage and the pace of cleanup and recovery.


“If the rain lets up and we’re able to get in and the roads are able to be cleared, then we fully intend to be open and ready for business Tuesday,” he says. “There is a possibility that even on [Sept. 5], depending on the severity of impact to our facilities, we may have a rolling start. It may be that 75 percent of schools are up and ready to go and they’ll get going, and as other schools are able to be cleaned and refurbished, then they will open.”


The biggest needs, Carranza says, are basic items, including clothes and school supplies.


“We know that students and families lost everything,” he says. “Students went back-to-school shopping for school uniforms and clothing and school supplies. Given the amount of flooding that’s happened, many of our students are going to have lost everything.”


Over the weekend, American Federation of Teachers President Randi Weingarten held a conference call with local teachers union leaders in Houston and surrounding areas to get a sense of the devastation.


“One thing is obviously clear, that communications are not optimum, and many members are not receiving anything via mobile phone or email,” the Texas chapter of the AFT wrote on its Facebook page. “We'll keep pushing out all we can to help those in need.”


The Texas AFT has set up a disaster relief fund for impacted teachers, where they can apply for aid to help cover home damage, ruined cars, care for injuries from the storm and lost school materials. It’s also mapped out how to deliver clean water and other supplies to affected areas once the storm subsides.


While much of the focus has been on Houston schools, smaller districts were also impacted.


In the coastal town of Rockport, Texas, the storm ripped metal siding off a high school gym and mangled the door frame of the school's auditorium, according to local media.


Support for educators and school officials came pouring in over Twitter, with school officials from Fort Worth and Arlington in Texas – and from farther away in Miami – tweeting their support and offers to help.


“Our prayers are with all those in the path of #HurricaneHarvey,” Education Secretary Betsy DeVos tweeted over the weekend, adding that her department “stands ready to assist impacted schools.”


DeVos joined a teleconference with President Donald Trump on Sunday regarding the impact of the storm, and department staffers have a meeting scheduled for Monday afternoon to discuss the type of assistance the department can provide.


Lauren Camera is an education reporter at U.S. News & World Report. She’s covered education policy and politics for nearly a decade and has written for Education Week, The Hechinger Report, Congressional Quarterly, Roll Call, and the Chronicle of Higher Education. She was a 2013 Spencer Education Fellow at Columbia University’s School of Journalism, where she conducted a reporting project about the impact of the Obama administration’s competitive education grant, Race to the Top.

Posted by Angela Valenzuela at 12:20 PM