The Youngest Americans: A Statistical Portrait of Infants and Toddlers in the U.S. (2013) 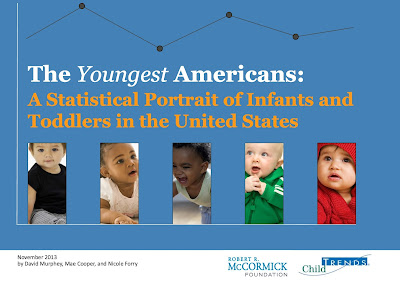 Executive Summary
America’s youngest children—12 million infants and toddlers—are the leading edge of a demographic transformation in the U.S. They herald a nation more diverse with respect to race/ethnicity, country of origin, language, and family type than at any time in our recent history. They are surrounded by, and engaged with, new technology. Most of our youngest Americans, according to their parents, have at least some of the important characteristics associated with optimal development.
At the same time, they are a generation characterized by marked inequities, with disturbing proportions facing severe disadvantage that imposes both immediate and lasting threats to well-being. Significant numbers are born into families without the human and financial resources to promote their development; disparities by race and Hispanic origin persist; public policy responses have been slow to materialize and, where they
exist, often serve only a fraction of the children in need.

Many in this generation are starting out with severe economic hardship.
•
Nearly half (48 percent) of America’s infants and toddlers
live in low-income families (incomes less than twice the poverty line); one-quarter (25 percent) live in families below the official poverty line.
•
One in eight (13 percent) is in deep poverty (that is, their family’s income is half or less than the poverty level).
•
Economic disadvantage is concentrated in the families of black and Latino infants and toddlers; fully two-thirds (66 percent) of these young children are in low-income families.
•
Nearly one in four (24 percent) black and Latino infants and toddlers live in households that are “food-insecure” (a measure of inability to obtain sufficient healthy food).
Multiple Inequities, Multiple Disadvantages

The deep inequities marked by income and race/ethnicity are often compounded by fragile family configurations. Increasing numbers of America’s youngest children (24 percent, in 2012) are raised by a single parent. A small (but increasing) number (16 percent) are in the care of grandparents.
The available research tells us that these circumstances, on average, are riskier for children’s optimal development. More troubling is that these children are also disproportionately in families where their parents or other caretakers are poor and poorly educated. The disadvantages of being poor, and with unmarried parents who lack the preparation that would allow them to join the middle class, converge for many of our youngest children, hobbling their progress virtually from their earliest days of life.

Posted by Angela Valenzuela at 8:35 AM