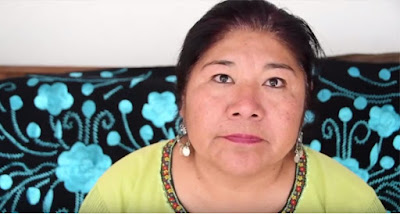 Celerina Patricia Sánchez Santiago. BÉRENGÈRE SIM
Mexico’s culture ministry recognises 68 indigenous languages – although some experts say there are more than 100 spoken in the North American country.
Today, dozens of these languages are at risk of extinction – with battles to stop this being waged on multiple fronts. One of these is literary – with indigenous women among those preserving their languages through poetry and storytelling.
Celerina Patricia Sánchez Santiago is part of the Alliance for Indigenous Women in Central America and Mexico (ALIANZA) network strengthening the voices of indigenous women and their participation in feminist movements.
Preserving indigenous languages is “important to understanding who you are, to then understand the world, and to be a part of it,” says Sánchez, a linguist and indigenous rights activist from San Juan Mixtepec, in Oaxaca.
Sánchez speaks and writes poetry in Tu’un ñuu savi, the language of the Ñuu savi (‘the people of rain’), about her community’s culture, women’s lives, discrimination, resistance, and the multicultural composition of Mexican society.
In 2013, she published “Inií ichí” (‘the essence of the path’), a compilation of her poetry in Tu’un ñuu savi and Spanish.
“When you lose a language, you lose a whole culture,” adds Ana Chino Miguel, who is also from Oaxaca. She has written a children’s book as well as other teaching material in Zapoteco, the indigenous language she speaks.
“This is what we have to do, those of us who are aware of how valuable all of the languages in the world are,” Miguel said in Mexico City, where she lives. “Ours is also a language, but a lot of people discriminate against it and say it is a dialect.”
Over the years, she told me, elders’ customs have been forgotten. She said that she wanted not only to teach members of younger generations how to read their language but also to introduce them to these traditions.
“Raising awareness amongst children and young people, the culture will then be valued, with its craftsmanship, everything that constitutes a culture.”
More than 7 million people in Mexico (roughly seven in every 100 of the country’s inhabitants) speak at least one or more of these languages.
Mexico is one of the world’s countries with the most indigenous languages, according to government authorities – and second in Latin America after Brazil.
In 2014, as many as 60 of these languages in Mexico were considered at risk of extinction, according to the public Centre of Research and Higher Studies in Social Anthropology, with 21 of these classified as ‘critically endangered.’
“In this world, even science has confirmed that diversity enriches our lives,” Sánchez told me: “So let us fight to be more diverse, to be different.”
DONATE
No ads, no subscription fees.
Instead, Truthout is fueled by generous donations from readers. Want to support our work? Donate today!
This piece was reprinted by Truthout with permission or license. It may not be reproduced in any form without permission or license from the source.
Bérengère Sim
Bérengère Sim is a freelance journalist based in Mexico City.
MORE BY THIS AUTHOR…

The Slippery Slope of Dehumanizing Language

The pervasive use of dehumanizing language is a slippery slope that can ultimately cause tremendous harm.

by
Allison Skinner
The Conversation

For more than 150 years, the Wôpanâak language was silent. But a recently established language school on the Mashpee Wampanoag Tribe's reservation in Massachusetts is working to bring…

"Walk with us," participants tell philanthropic funders at Pacific gathering.