The Benefits of Ethnic Studies Courses

The results on college-level Ethnic Studies courses keep turning up positively in terms of their effects for outcomes like college graduation rates.  There is indeed a large and growing body of evidence showing that this isn't "culture wars" or "identity politics" at play, but evidence-based scholarship that should have implications for the university experience, particularly for an increasingly diverse society.


The Benefits of Ethnic Studies Courses

San Francisco State University students graduate at higher rates when they pass ethnic studies courses, but not everyone agrees on what this means. 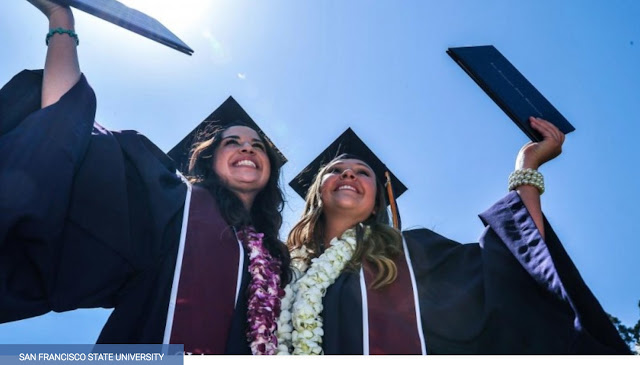 Racial tensions and culture wars on many college campuses have often led some to propose that colleges add ethnic studies, while others have challenged the existence of these courses. Meanwhile, the data show that students in these classes at one university have improved or better outcomes than their peers.
New data from an evaluation of San Francisco State University's ethnic studies courses found that by passing just one class, students improved their overall performance across the campus.
The data compiled by the college's Division of Institutional Analytics found that ethnic studies majors in general graduate at a rate about 20 percentage points higher than non-ethnic studies majors. In 2010, ethnic studies majors had a six-year graduation rate of 77.3 percent, compared to a rate of 52.3 percent for nonmajors. SF State is unique in having the country's first and only freestanding college in ethnic studies.

Ken Monteiro, the acting director of the César Chávez Institute at the university and former dean of the ethnic studies college, said the data point in one direction: "We would suggest more ethnic studies classes."
There are several reasons why this effect in improved outcomes happens in ethnic studies over other majors, he said.
"Ethnic studies faculty members spend more time on advising and supplemental education than faculty in other areas," Monteiro said. "We partner and try to offer wraparound services. We teach them information that directly relates to them and then teach [students] how to relate the information to them even if it's not literally related. And third, we teach critical thinking strategies to show them they can look at things from a different perspective."
Many of the ethnic studies students are also in SF State's Metro Academies College Success Program, which has seen its own success in increasing completion rates. The Metro program combines student services with a curriculum that emphasizes social justice. At SF State, Metro students have a 60 percent six-year graduation rate compared to 53 percent for the university.
But Matt Malkan, a professor of physics and astronomy at the University of California, Los Angeles, and a member of the California Association of Scholars, which is skeptical of some ethnic studies programs, said correlation shouldn't be confused for causation. Majoring in ethnic studies is easier than other majors like physics, he said in an email.
"One would have to control for the relative difficulty of the major programs chosen by these students to make any serious evaluation of this," said John Ellis, a chair of the California Association of Scholars and professor emeritus of German literature at the University of California, Santa Cruz.
Malkan said he also questions the effects reported at San Francisco State when completing an ethnic studies course is required to graduate. For example, students can satisfy U.S. history requirements for graduation by passing one of a number of courses offered from within the College of Ethnic Studies.
"Any graduation requirement is a clear signpost of progress toward degree completion," he said. "Students who complete that requirement are also showing themselves more likely to finish college, and in a shorter time, compared with those who have still not yet managed to get around to getting that requirement done successfully."
But Monteiro said ethnic studies also works to protect students from the emotional distress they may feel even within the classroom.
"They see our classes as an oasis where they're not attacked or harmed, and it's easier to learn when you're not feeling under attack," he said, adding that those attacks -- also known as stereotype or identity threat -- can happen in physics or calculus courses where one may assume identity doesn't play a role.
The idea is that if you're a historically underrepresented person in an education setting, then you experience anxiety in that academic setting. So a woman in an all-male high-level math course may underperform if she senses gender bias, even if that bias isn't overt or malicious, said Thomas Dee, a professor and director of Stanford University's Center for Education Policy Analysis.
SF State is a diverse campus where about 30 percent of undergraduates identify as Latino, 27 percent as Asian, 19 percent as white and 5 percent as black. But in a paper published last year, SF State professors found stereotype threat affected black students in psychology courses, where they were in the minority, as opposed to those black students who were enrolled in Africana studies, where they were the majority.
A similar effect of ethnic studies courses improving outcomes for students was found at the high school level two years ago by Dee and other researchers at Stanford's Graduate School of Education. The study examined an ethnic studies pilot program in San Francisco high schools and found students' attendance, grades and number of course credits for graduation increased and improved.
"There is an extensive literature base demonstrating the effects of ethnic studies in K-12 and higher education that goes back a couple of decades," said Nolan Cabrera, an associate professor in the Center for the Study of Higher Education at the University of Arizona. "Ethnic studies definitely need to expand. We're still exploring the underlying mechanisms, but the more students see themselves in the curriculum, the better they'll do. The more they see the relevance to their everyday lives, the more engaged they'll be, and that's what makes [ethnic studies] unique."
Despite the multiple studies that show the improvement students make when they take an ethnic studies course, the field continues to be under attack. Cabrera, for instance, has presented evidence defending the efficacy of Mexican-American studies in Arizona high schools, which led to a federal judge ruling that the law banning the courses was created and enforced with anti-Mexican-American hostility.
And two years ago the ethnic studies college at SF State was fighting to survive budget cuts.
"Either it doesn't exist or there are legislators trying to kill it and this data is not changing their minds," Monteiro said. "We say we're a fact-based society and evidence-based society, but we're trained to ignore facts if they don't help our agenda."
Dee said some of these same interventions used in ethnic studies, such as limiting stereotype threat and offering student support services, could apply in other fields to help students.
"This isn't just culture wars or identity politics," he said. "There's a sound theoretical foundation for why culturally relevant pedagogy can be effective."

Ashley A. Smith
Posted by Angela Valenzuela at 5:34 AM