Juan Sanchez, Southwest Key CEO featured on the Front Page of the NYTimes

It would be interesting to parse out how much of his wealth comes from charter schools and how much from immigrant children's detention.  The paper version of this NYTimes piece is more extensive, by the way.
Like the late Molly Ivins would say about such things, "This is big bid'ness!"
-Angela Valenzuela 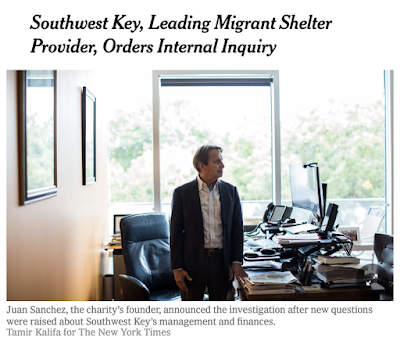 By Kim Barker, Nicholas Kulish and Rebecca R. Ruiz
·       Dec. 4, 2018
·
Southwest Key Programs, the nation’s largest provider of shelters for migrant children, will hire outside legal counsel and forensic accountants to review its management practices and finances.
The decision comes in response to a New York Times article on Sunday that raised new questions about potential financial improprieties at the Texas charity. In a statement provided to The Times Monday night, Juan Sanchez, who founded the nonprofit more than 30 years ago, said the comprehensive internal review would identify potential conflicts of interest and areas for improvement in the charity’s rules of governance.
Over the past decade, Southwest Key has collected $1.7 billion in federal grants, including $626 million in the past year. The Times showed how the charity had lent millions to developers to buy shelters and had enriched investors who rented facilities to Southwest Key — including Mr. Sanchez and the charity’s chief financial officer, part-owners of one shelter site. The charity has also stockpiled more than $61 million in cash.
[Read The Times’s examination of Mr. Sanchez’s nonprofit empire.]
The federal government capped executive salaries paid out from the shelter grants last year at $187,000, but Mr. Sanchez earned $1.5 million as chief executive. His wife, a vice president, was paid $500,000; the chief financial officer, Melody Chung, $1 million. In all, eight people at Southwest Key earned more than the salary cap.

Mr. Sanchez said in the statement that he was “disappointed that the article failed to show the number of lives we’ve changed with the significant number of reunifications, and it failed to highlight the good work we do within our schools and our juvenile justice programs.” But he added that the article “brought forth a number of issues that are of concern to me.”
In a memo to staff on Monday, he said that anyone asked to participate in the review, including himself and Ms. Chung, would cooperate fully or “face immediate consequences.”

But the independence and thoroughness of the investigation will depend on the person leading it, said Lloyd Mayer, a professor at Notre Dame Law School specializing in nonprofit law.
“It can be difficult as the outside investigator to write a hard-hitting report to slam the very person who seems to be driving the process,” Professor Mayer said. “Everyone knows who is paying the bills and what the desired response is.”
The inquiry comes as the federal government steps up scrutiny of shelter providers, hiring an accounting firm to review their finances. That review is underway, a spokesman for the Department of Health and Human Services said. The F.B.I. is also investigating a former competitor of Southwest Key, the Texas-based International Educational Services, for potential misuse of federal money, according to two people informed of the inquiry.

Mr. Sanchez, 71, founded Southwest Key in 1987 in his hometown, Brownsville, Tex., with a focus on juvenile justice issues, helping reform youth offenders in their communities rather than sending them away.
As the number of unaccompanied migrant children grew in the following years and a lawsuit forced the federal government to detain them separately from adults, Southwest Key moved into the business of housing minors. It has become the largest shelter operator nationwide, with 24 facilities capable of housing 5,000 children.
The children’s shelter system is full, with a record 14,000 minors spread across roughly 100 sites. The Trump administration’s family-separation policy focused intense scrutiny on the system this past summer.
Casa Padre, Southwest Key’s mega-shelter in a converted Walmart superstore in Brownsville, became a symbol for the outcry over the separation policy. Children’s advocates decried the shelter as effectively a warehouse for children.

But in addition to the questions raised about humane care for minors, the financial transactions behind Casa Padre revealed some of Southwest Key’s unusual business practices. Instead of buying the empty store, Southwest Key lent $6 million to a company run by a pair of Brownsville developers to purchase and renovate it, then began paying $5 million a year to rent it.
Mr. Sanchez defended Southwest Key’s practice of renting shelter sites, saying the charity did not want to be stuck with the buildings if fewer children crossed the border.
In his memo to employees, whom he called the “Southwest Key Familia,” he affirmed, “We will continue to seek to fulfill our mission to improve the lives of the children and families we serve.”

Posted by Angela Valenzuela at 12:51 PM