My fellow Texas Longhorns, millennials, in particular, please try your best to be open-minded about this. Try and see for yourself just how racist and scary "The Eyes of Texas" song could sound to someone who may not even know this deeper history, but who knows Texas' racist history, including that it became a slave state, resulting in a war with Mexico.  Sung to the tune of "I've Been Working on the Railroad," the lyrics have always sounded creepy to me and this article provides depth to its racist history.

I have shared my concerns with this song with my students over the years. At first, it sounds incredulous and then it makes sense. The story behind it was never too hard to find if one only looked.  We need for everybody to know this history and to care about how it is a horrific signifier of pain and misery under slavery and Jim Crow.

Plus, it's a perfect follow-up to my other morning post on Shaun King's piece titled, "Why I'll never stand again for 'The Star-Spangled Banner'" Though it’s going to be rough going, challenging all of these icons supported out of custom and ignorance, I trust we’ll be in a better place after all of these demands get their long overdue attention and substantively addressed.

Personally, it feels redemptive right now for the roots of this racist song simply to get the exposure it should have gotten so very long ago. 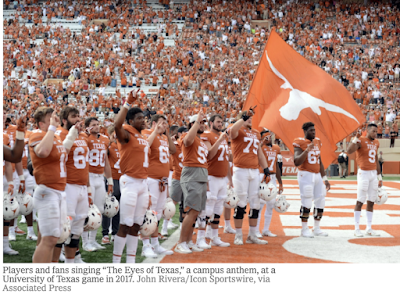 By Maria Cramer and Johnny Diaz

For generations, students at the University of Texas at Austin have stood up at sports games, raised their right hand to form the symbol of the storied Texas Longhorns and belted out “The Eyes of Texas,” a campus anthem.

Now, athletes including members of the university’s football team, which holds an exalted place in the campus culture, want the song gone.

Unbeknown to many students and alumni, the song can be traced back to Robert E. Lee, the Confederate general, and was performed at minstrel shows in the early 20th century.

On Friday, student-athletes referred to that troubled history when they called on the university to replace it with a song “without racists undertones.”

It was among a long list of requests made by the athletes, who said that if their demands were not met, they would no longer help the university recruit new players or participate in donor events.

“We aim to hold the athletic department and university to a higher standard by not only asking them to keep their promise of condemning racism on our campus but to go beyond this,” the athletes wrote in a letter posted on Twitter by several players, including Brennan Eagles, a Longhorns wide receiver.

The department and university, they wrote, must take action “to make Texas more comfortable and inclusive for the black athletes and the black community that has so fervently supported this program.”

The song has become another symbol linked to the Confederacy to face intense scrutiny and demands for removal amid the nationwide protests after the death of George Floyd on May 25. The football team marched together in Austin this month, linking arms and taking a knee for eight minutes and 46 seconds, the amount of time a Minneapolis police officer kept his knee on Mr. Floyd’s neck as he cried out that he could not breathe.

Nearly one week after Mr. Floyd’s death, Chris Del Conte, the university athletics director, encouraged athletes and staff members in a statement to “speak up and become a part of the direct and difficult conversations that must take place in the days and weeks ahead.” 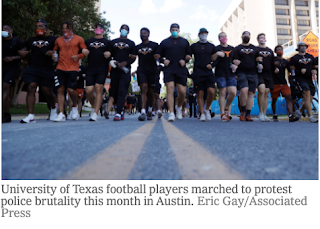 “It is our duty to stand up against racism,” he added.

On Friday, Mr. Del Conte posted the athletes’ letter on his personal Twitter account and indicated that he would talk to the students about their demands.

“I am always willing to have meaningful conversations regarding any concerns our student-athletes have,” Mr. Del Conte said. “We will do the same in this situation and look forward to having those discussions.”

J.B. Bird, a spokesman for the university, said in an email that university officials were aware of the student-athletes’ list of requests.

He said university officials “look forward to working with them and the UT community to create the best possible experience on our campus for Black students.”

The athletes called on the athletics department and the university to take a series of measures including creating a permanent black athletic history exhibit in its Hall of Fame; donating a portion of the athletics department’s annual earnings to black organizations, including Black Lives Matter; and renaming campus buildings, including one honoring a mathematics professor who refused to let black students in his class after the university desegregated.

Lee’s connection to the song came through William Prather, president of the University of Texas from 1899 to 1905. In the 1860s, Prather had been a student at Washington College, in Lexington, Va., while Lee was the school’s president.

Lee would always end remarks to Washington faculty members and students by saying “the eyes of the South are upon you,” according to Edmund T. Gordon, a professor in the University of Texas’ African and African diaspora studies department.

Those remarks were most likely intended to remind students that the “tradition and the heritage of the South are watching over you and you should conform or engage in comportment that comes with that valiant tradition,” Professor Gordon said on Saturday.

That notion, of the antebellum South as a pastoral paradise filled with gallantry, is known as the “Lost Cause” ideology, which seeks to play down the evils of slavery and cast the Confederacy’s cause during the Civil War as just and heroic, he added.

When Mr. Prather became president of the University of Texas, he invoked the phrase and changed it to “the eyes of Texas are upon you,” Professor Gordon said.

Students wrote satirical lyrics with the phrase and set them to the tune of “I’ve Been Working on the Railroad.”

Its first performance was around 1903, by a university quartet at a minstrel show at the Hancock Opera House in Austin, the professor said.

“The assumption is it was performed in blackface,” he said.

The university acknowledges on its website that the song was “first sung at a minstrel show and taken indirectly from a Robert E. Lee quote, contextual elements that many people find offensive.”

“Embracing the song’s meaning today should not stop us from seeing its complicated past, and acknowledging the many ways that people see the song,” it added.

There has been resistance to the song before, Professor Gordon said. In the late 1990s and early 2000s, some student-athletes refused to stand when the song was played, but their efforts did not go far. In 2018, the student government held a debate over whether to stop singing the song.

“This is the first time that I know of that there has been relatively widespread support for having it not be the school song,” said Professor Gordon, who has been at the university for 30 years.

During a briefing with the news media on Thursday, Caden Sterns, a defensive back, said the recent protests around Mr. Floyd’s death and police brutality had created an obligation for students to educate themselves on the country’s history of racism.

“We’re more than just people out there just banging our heads and hitting people,” he said. “We’ve got people who got beliefs and perspectives, and so as athletes, I think we should use that to the fullest ability.”

On Friday, Mr. Sterns posted a message on Twitter, thanking people who have supported the team’s call for change.

“And for those who don’t.. and reacting with hate… still nothing but love,” he wrote. “True colors are being shown, and the hate will be EXPOSED.”

Posted by Angela Valenzuela at 8:13 AM

Email ThisBlogThis!Share to TwitterShare to FacebookShare to Pinterest
Labels: #BlackLivesMatter