Trump Is Terrified of Protest, by Peter Nicholas | The Atlantic May 31, 2020

We're all aware, by now, of Trump's inflammatory tweets, particularly the one from last Friday when he tweeted, “When the looting starts, the shooting starts.”  There is no ambiguity here. Though he later walked back his statement like he always does, he definitely meant that looters could be met with deadly force.

Accordingly, Valerie Jarrett, President Obama's former senior aide expressed, Trump threw "a verbal Molotov cocktail into what is already an explosive, emotional situation...when he should be doing the exact opposite. He’s playing to a very small part of his base for political purposes.”

And then we get news today, that Trump took shelter last night in a White House bunker to protect himself from protesters outside.

When will our Instigator and Hatemonger in Chief vacate this office?!

We must all vote in November and get him out of office.


Trump Is Terrified of Protest

Violent demonstrations across the United States bring out a particular weakness in the 45th president.
PETER NICHOLAS
MAY 31, 2020 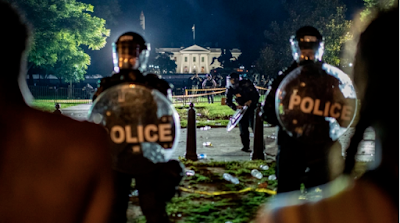 PETER NICHOLAS is a staff writer at The Atlantic, where he covers the White House.
Posted by Angela Valenzuela at 12:17 PM