In Our Own Words: Institutional Betrayals By Reshmi Dutt-Ballerstadt in Inside Higher Education

Excellent critique of the systemic inequitable situation for faculty of color published in Inside Higher Education. I'm really proud of the Independent Equity Committee at UT pictured below for their boldness and courage in standing up to injustice at the University of Texas at Austin. Do read the statements below made by faculty of color that have departed higher education institutions.  They're poignant and enraging because of the racism and white supremacy that exists.

This is not sustainable.  That's why there's a whole movement that's taken to the streets that's saying that all of this othering has to stop.  There's simply no defense for discrimination, especially institutionalized forms that though enmeshed in the very fabric of what counts as knowledge in higher education, must get interrupted in a big way sooner or later, as this is not sustainable. Plus, it is in our interest as a nation and as a community that, to borrow from a piece on Ethnic Studies that Emilio Zamora and I wrote, we must "weave a broader we" in this country. We need equity everywhere. And we need to end white supremacy everywhere, as well.

All of these bad things happening as Trump denies that he heard people yelling "white power" in a video that he tweeted. Now he's saying that he didn't hear what he had tweeted. He should just own that he's a white supremacist and stop playing games.

Thanks to Dr. Tony Baez for sharing.

In Our Own Words: Institutional Betrayals 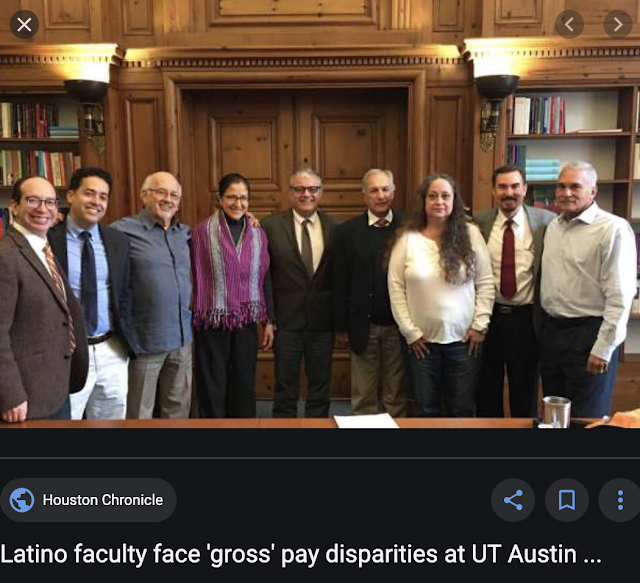 When Reshmi Dutt-Ballerstadt asked a large group of underrepresented
faculty members why they left their higher education institutions, they
told her the real reasons for their departures -- those that climate surveys
don't capture.

Why do marginalized faculty members leave their college or university?
Climate surveys that institutions conduct to try to assess the reasons do not capture the true personal narratives. It is time to allow a public space for marginalized faculty who have left or been cast out of their institutions to reclaim their exits in their own words. Some have departed their institutions for far better opportunities elsewhere or for personal situations beyond their control, while others have left because their institutional climates are unbearable.
The 2019 HERI survey revealed that “faculty of color and female faculty disproportionately experience stress due to discrimination and feel they have to work harder than their colleagues to be perceived as a legitimate scholar.” Not long ago, eight professors at the University of Texas at Austin demanded that “documented inequities in pay, promotion, leadership opportunities and recognition for Hispanic faculty members” be resolved. And in honest discussions, discriminatory practices, racism, macro-invalidation and inequity are repeated reasons why marginalized faculty and staff leave their departments -- creating a revolving door where new faculty are hired to replace those pushed out of their positions or exiting the academy permanently.
Yet many institutions misinform their constituencies as to why faculty of color and other underrepresented faculty members resign or are asked to resign. The reasons for their resignations are often portrayed as a lack of fit or better opportunities elsewhere, but their colleagues, harassers and aggressors, human resources departments, and institutional legal counsels know the real story. And, unfortunately, the urgent question still remains unanswered as to how institutions have changed their structures and policies as a result of the climate surveys to provide protection for and retain such individuals in the future.
This is a piece about institutional betrayals and the failure to create campus climates that promote diversity, equity and inclusion among faculty members and administrators. Perhaps the climate studies and reports should be called transparency reports on institutional betrayals, if there is any chance that these betrayals will be followed by redress.
In Their Own Words
In an attempt to collect honest rationales (in lieu of exhaustive climate surveys) as to why underrepresented and marginalized faculty and staff members have left their previous institutions, I asked a direct question, “Why did you leave?” to a large group of underrepresented faculty members on a closed Facebook group. I promised to maintain their anonymity and requested that they distill their reasons to 500 characters or less. The goal of this project was simple: to allow those who have left/resigned/been forced out to narrate in their own words the real reasons for their departures -- those that climate surveys did not capture. Here’s what faculty said:
As many of the respondents noted, toxic departmental climates and routine failure and negligence by those that hold institutional power to address various forms of micro- and macro-aggressions (and sometimes outright racism) continue to be pervasive features that female and minoritized faculty within academe face. When pre-existing conditions that create unwelcome environments are not seriously considered, retention of marginalized faculty and staff members poses a serious challenge. “You just can’t bring brown [and black] bodies into a white supremacy system and expect [them] to be OK,” noted Ebony O. McGee.
In 2014, a writer who used the pseudonym Female Science Professor in “Talking about a toxic environment: Should you tell administrators and colleagues why you are leaving?” noted that “talking about your reasons for leaving may not be an easy thing to do, especially if you have been in a toxic environment for a while and just want to leave it behind as soon as possible.” Yet institutional failures to grapple with toxic work environments leads to a perpetuation of the problem. “Even if only one person is primarily responsible for creating a hostile workplace” says the Female Science Professor, “there may be an institutional culture that does not allow such problems to be recognized and resolved effectively. “Remaining benign or indifferent to climate issues experienced by underrepresented faculty or staff members -- in spite of expensive climate reports -- is the clearest indication of institutions suffering from a racism problem.”
The stories of cover-ups of hostile work climates by administrations to save face for the institutions in front of donors, the news media and the public are commonplace. So are the various forms of retaliations, harassment and gaslighting that the brave faculty of color and other marginalized people confront when they have come forward and filed complaints about their hostile work environments, microaggressions, racist and blatant differential treatment. Rather than responding to these complaints and acts of whistle-blowing with utmost compassion and care, the retaliations and gaslighting that can follow are truly alarming. In Sara Ahmed’s blog “Feminist Killjoys” she articulates how:

A formal complaint can lead you into the shadowy corners of an institution, meeting rooms, corridors; buildings you did not have any reason to enter before become where you go; what you know … You learn about processes, procedures, policies, you learn to point out what they fail to do, pointing to, pointing out; you fill in more and more forms; forms become norms; files become futures; filing cabinets, graves.

A mediator who was once hired to deal with the hostile climate in a department told me, “You are like a canary in the coal mine.” While the canary signals the imminent danger in the coal mine, it is also always caged, and its eventual fate is death. Many of us who are underrepresented faculty and staff members engaged in diversity work cannot become canaries. We must find exit doors to survive when faced with repeated aggression from those on our campuses who block narratives of documented hostile climates. We cannot put our bodies on the line to uphold diversity initiatives without any institutional mechanisms to protect us.
We also cannot become institutional plumbers and mechanics when it becomes clear to us that beyond the “climate surveys” conducted, the blockage, the leaks, the outdated wiring and the foundational cracks cannot be repaired. They need major renovations by rewriting and revising institutional policies and establishing a record of compliance by holding those accountable for perpetuating hostile climates and microaggressions against their underrepresented faculty and staff. To do anything less is just watching the revolving door keep revolving. Reshmi Dutt-Ballerstadt is the Edith Green Distinguished Professor and teaches in the English department at Linfield College in Oregon. She is the author of The Postcolonial Citizen: The Intellectual Migrant and is the lead editor of the forthcoming book Civility, Free Speech and Academic Freedom in Higher Education: Faculty on the Margins. Dutt-Ballerstadt frequently writes and critiques about conditions that impact underrepresented faculty in higher education and issues of free speech and academic freedom.

We are retiring comments and introducing Letters to the Editor. Share your thoughts »