Gee, What A Stunt Trump Pulled Off Yesterday In Our Nation's Capitol, Bible In Hand

Gee, what a stunt Trump pulled off yesterday in our nation's capitol.  This involved tear-gassing nearby protestors so that he could have a photo op, Bible in hand, in front of St. John's Episcopal Church. According to a Twitter post by Axios.com, what transpired was an organized attempt to convey strength, as well as law and order, after an evening of being bunkered in the White House as the crowds surrounding it drew nigh.  You can read about it all in today's Washington Post article titled, "Inside the push to tear-gas protesters ahead of a Trump photo op."

Let’s face it. When you think of Trump holding a Bible and the evangelicals that support him, you don’t think about Jesus, you think of red hats and fascism.

Adolf Hitler and Benito Mussolini came immediately to mind as I saw an angry Trump using the Bible as a prop. 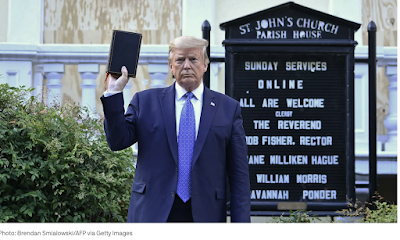 [Note: I traded out this photo for the prior one that showed Hitler with a Bible since it was photoshopped and I adhere, as I think we all should, to truth in visual representation.  That said, Trump's stunt genuinely made me think of Mussolini and Hitler.  I doubt I offended anyone, but the principle of truthful representation remains. Thanks to Carol Holst for alerting me to this.  Thank you!  -AV]

This should make us all shudder as this administration signals an opening of the floodgates to violent repression and dictatorial rule, bringing our already fragile democracy to a standstill when what we should be doing is developing a Marshall Plan for America that rebuilds it in a way that is equitable, inclusive, and transparent.

Evangelical Christians support Trump because in their minds, he’s getting them everything they want, especially putting conservative judges on the bench who support their white supremacist, patriarchal, individualist, and neoliberal capitalist values and agenda for holding onto power even if others suffer, as a consequence. Read: Trump rages at Christian magazine that called him ‘grossly immoral,’ but still finds evangelical support. 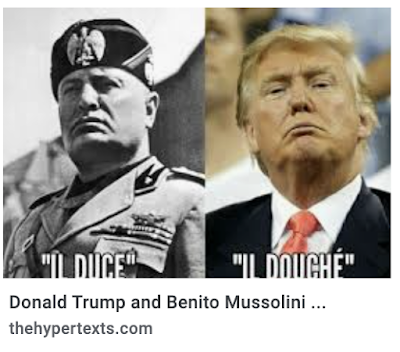 My friends, this dynamic that we're witnessing is resurgent fascism where individuals lose their capacity for criticism denouncing all thoughts and strivings for a just, more humane world, opting instead to heap anger upon the “other” who disturbs their warped, one-sided fantasy of social unity.

Yet as I learned in church growing up, the ends do not justify the means.  The means through which we accomplish our goals are every bit as important as the ends themselves.  Not that I agree with the ends of the Christian right, but the principle still holds that legitimate ends should not be pursued illegitimately. If evangelical Christians are to take this to heart, as I believe they should, they would have to reject their champion, a step that many, if not most, are not willing to take.  However, we don’t need all of them to do this.  We need only a few to be able to shave off his power at a decisive level.

He is morally and ethically bankrupt.  He has no positive, hopeful, or constructive words for a nation reeling from crisis in the wake of George Floyd's murder.

We must vote this man and his party out of office in November.  Nothing could be more urgent.

Posted by Angela Valenzuela at 1:10 PM