This rather disturbing but not surprising, research examines the "publication gender gap" that exists in higher education.  As I think of who I have co-authored with, most have been women, which may speak in a positive way to not only the field of education which is highly female dominated, as well as to the presence of women, particularly minority women of color, in the academy.  We help fill the gap created by the gap.
-Angela Valenzuela

Behind the Publication Gender Gap


Numerous studies have found that men in the sciences publish at higher rates than women. But the designs of some of those studies make it difficult to isolate the possible origins of that gap. Women are less likely than men to attend prestigious doctoral programs, complicating any study of gendered publication rates among researchers with different educational backgrounds, for example, as journals favor prestige.
A new study sought to level the contributing factor field, as it were, by considering researchers -- Ph.D. candidates -- in the same academic stage at the same institution. The authors wanted to know, specifically, how the number of scholarly works submitted for publication, first authored and published, differed between male and female students. They also asked how those differences varied by field, both within and outside the sciences.
The authors found that men submitted and published substantially more scholarly works than their female peers. That pattern occurred in both the male-dominated engineering and physical sciences, they note, as well as the more gender-balanced natural and biological sciences and even in the sometimes female-dominated humanities and creative arts and social sciences and applied health fields.
As for why, the study offers some clues: men rated their relationships with their advisers, career preparation and faculty support for research more highly than did their female peers. Those findings align with previous research suggesting that male Ph.D. students tend to receive more research mentoring from their advisers in science and other fields, the study says. Beyond that, research assistantships were also a strong predictor of publication submissions.
Yet the disparity remains largely unexplained. Possible factors meriting future study including greater teaching responsibilities for women and career goal differences between men and women, lead author Sarah Theule Lubienski, a professor of math education at Indiana University, said Tuesday.
“Universities should take stock of patterns on their own campus, including their female doctoral students’ research mentoring and productivity, as well as whether females are disproportionately serving as teaching assistants,” she said. “Universities should reward faculty for high-quality mentoring, including publishing with female students and others underrepresented in academia.”
Lubienski said individual faculty members have a role to play, as well, by monitoring the culture or climate in their labs, modeling authorship negotiation strategies, and encouraging women to submit their work for publication. “They should also be sensitive to parenting responsibilities that students may have and provide the flexibility needed to balance researcher and parenting roles,” she said.
‘Disturbing’
“Disturbing” is what Lubienski called her results over all, with men and women in the same career stage in the same fields within the same institution authoring “strikingly different numbers of publications during their doctoral programs.” Citing her findings in the engineering and physical sciences group in particular, Lubienski said that men reported submitting 7.2 articles during their Ph.D. programs, compared to 5.5 articles for women. Men first authored and published more articles than their female counterparts, too. Those differences tended to be largest in the STEM fields but were also significant in the humanities and arts, as well.
The study, published recently in Education Researcher, is based on 1,285 responses to an original survey of advance science students from one unnamed Big Ten institution. The survey asked about students’ level of satisfaction with their programs and the number of research articles, chapters and other scholarly works submitted during their studies. Some 90 Ph.D. programs on the unnamed campus are divided into five disciplinary groups, mentioned above and again here: engineering and physical sciences; natural and biological sciences; humanities and creative arts; social sciences and applied health; and education and professional programs.
On average, across disciplines, men submitted an average of 5.9 manuscripts for publication (3.7 as first or solo author), versus women’s 3.7 publications submitted (2.2 as first or solo author). The number of submissions published or accepted also differed significantly: 4.9 for men and 2.9 for women. The starkest differences were seen in engineering and physical sciences and in the natural and biological sciences. Figures for the latter are 5.3 submissions for men and 3.8 for women. But significant gaps were observed in most fields. The one exception was education and professional programs, in which no significant gender differences were observed. 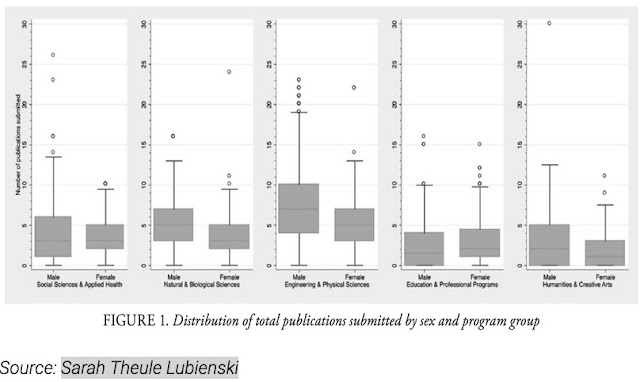 
Wherefore the Gap?
Men tended to report slightly higher satisfaction with aspects of their Ph.D. programs, according to the study. These differences were slightly larger in some STEM fields and were significant predictors of publication submissions in later analyses. Men were slightly more likely to report being having been a research assistant at some point (85 percent versus 80 percent). Women, meanwhile, were more likely than men to report having served as a teaching assistant (82 percent versus 76 percent) and report that teaching responsibilities may have impeded their success. Advanced analysis revealed that research assistantships were strong positive predictor of publication submissions, with research assistants submitting 70 percent more manuscripts than those with no such experience.
A subsample of students were asked about faculty support for their research and chosen career paths. Men in that group were more likely than women to report that faculty members encouraged them to publish. Women were as likely as men to say that professors supported them in their chosen career paths.
Women in the subgroup were also more likely than men to say that family obligations, work or financial commitments, faculty availability, or (to a lesser degree) biased program climate negatively impacted their research progress.
Men’s and women’s stated primary career goals also differed in a subsample of survey respondents. Significantly more men than women hoped to obtain a research-intensive faculty position (34 percent versus 25 percent) or a private-sector position (27 percent versus 12 percent).
“Hence,” the paper says, “perhaps men in this study pursued more publication opportunities because they prioritized jobs that require a strong research record. On the other hand, given that career goals were reported after doctoral program completion, men’s stronger publication records might have contributed to sex differences in reported career goals.”
Lubienski co-wrote the study with Emily K. Miller, an assistant professor of math at West Chester University in Pennsylvania, and Evthokia Stephanie Saclarides, a Ph.D. candidate at the University of Illinois at Urbana-Champaign. Despite the many variables they considered, the authors say that the sources of the gap remain mysterious and further research is needed. More sensitive variables are needed to detect the most relevant forms of doctoral program bias against women, they say, and perhaps more program-specific analysis. The authors also note their study is limited by small sample size and one of its design virtues: that it considers students from only one university.
However, the study says, “it could also be that factors that go beyond faculty bias and traditional program supports should be considered, particularly given that publication disparities were substantial even in fields with gender parity.” It’s possible, for example, that that men may be more forceful in negotiating authorship -- or that men are more confident in their abilities and therefore more willing to submit their work for publication (though there are reasons that the latter may not be the case, according to the paper).
The women in this study “may have viewed publications as less essential for their future careers than the men,” Lubienski, Miller and Saclarides add.
Regardless of the cause, though, “concerns remain about long-term disadvantages women face if they publish less than their male peers,” they say.
Don’t Rule Out Gender Bias
A growing body of research -- contested by some -- suggests that gender bias in STEM is receding (and even reversed in terms of hiring), and that the faculty gender gap may be mostly about women’s professional choices. Laura L. Hoopes, professor emeritus of biology at Pomona College, is among those who have warned against looking too deeply into such findings -- or deeply enough to conclude that gender bias no longer exists in the sciences.
Hoopes on Tuesday called the new study “a valuable contribution to our knowledge of gender differences in academic field preparation.” Publications matter in hiring decisions, she said, and later matter in terms of “invitations to speak at departments and societies and in selection of nominees for awards, both areas in which women in science lag behind men.” She said Lubienski and her colleagues are right in suggesting that child-care issues are not the only important factor in holding women back in the sciences, but rather one variable among others. Hoopes also found it interesting that major variables remain unknown. A 2010 report from the American Association of University Women discussed other possibilities, she said, including "stereotype threat," impostor syndrome and, in Hoopes’s words, not "seeing publication as something you grow into, as opposed to something men are somehow born to do."
Citing a 2012 study that found subtle gender biases among faculty members hiring for a lab manager, Hoopes said she imagined that men serving more frequently as research assistants versus teaching assistants resulted at least in part from differential mentoring. During her own time as a graduate student, she said, “the men in the lab met with my adviser weekly, I only when I requested a meeting. He suggested that they go to meetings and write papers, but poured cold water on my suggestions along those lines.”
Today, Hoopes said, young women “seem to think sexism is over and don’t tend to see it even when it’s there unless it affects them personally in an unmistakable way. Later, when they are late assistant or early associate professors, they see it much more clearly.”

Posted by Angela Valenzuela at 11:07 AM