University of North Texas Professor Roberto Calderón shares these news about Chicana/o scholars that have completed their dissertations.  This is somewhat connected to my earlier post this morning on the gender gap in publications, which tracks back to both minority and gender gaps in these areas which are of course deeply historical and systemic in nature and very much related to larger questions regarding whose knowledge, history, and stories count.

Also tracking back to this earlier post, Dr. Carla Lynn Mendiola is a former student from my teaching days at Rice University in Houston, Texas.  Again, our very presence as women and minority faculty and researchers makes a difference in the world.

Our world is simply a more impoverished one when women and minorities face difficulties securing access to the upper-echelons of the academy where knowledge production happens.

Yes, as Dr. Calderón suggests, one student at a time and a bounty of such scholars in years to come. 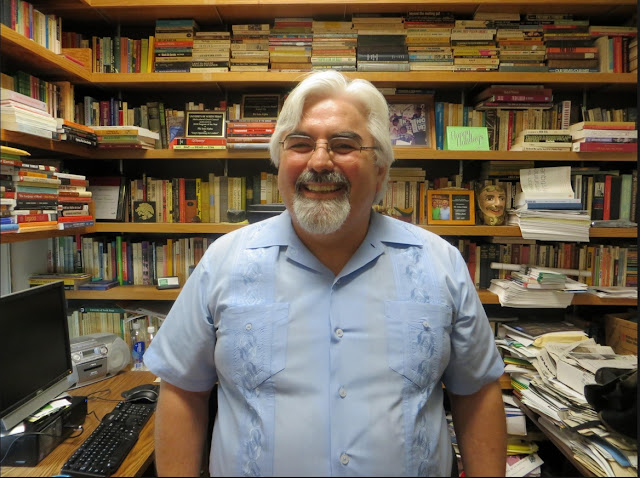 Historia Chicana
2 February 2018
&
Three Chicana/o Scholars & Historians Complete History Doctorates in the North Texas Area in 2017
Nota: Here’s sending belated congratulations to three young Chicana/o scholars and historians who completed their dissertations at private and public universities in the North Texas metro area in 2017.  The three include Rubén Alexander Arellano and Carla Lynn Mendiola who graduated in May 2017 at Southern Methodist University in Dallas, Texas. Both Rubén and Carla’s dissertations were guided by their dissertation chair, John R. Chávez. There continues to be a steady stream of young Mexican American scholars who study and complete their dissertations in history at SMU. The phenomenon has its own history of course and much is owed to John’s efforts past and present to making this happen with the support of the department faculty and the university in committing the necessary resources for the past 10-15 years resulting in a record of continued success. Peter’s dissertation we’re happy to report was chaired by the current writer. Peter’s dissertation is significant in several ways. Not least is the fact that the historiography of Mexicans in the North Texas metro area continues to experience a dearth of original research. In addition, Peter’s dissertation represents only the second dissertation ever completed by a Mexican American in the Department of History at the University of North Texas. The first and only other dissertation completed by a Mexican American scholar was the one filed by the late Jesús Luna in 1973 (no Chicana has ever completed a doctorate in history at UNT). May there be a bounty of such scholars completing their doctorates in history at UNT and SMU in the years ahead.—Roberto R. Calderón [Historia Chicana]

Abstract: This study explores the idea of Mexican-American indigenous identity, or indigeneity. I argue that modern Mexican-American indigeneity progressed from the Chicana/o movement’s notion of belonging as a primordial people of Aztlan to the full-fledged embrace of Native American identity. This idea of being indigenous is traced to the colonial writers and thinkers, criollo patriots, mestizo nationalists, and the indigenists intellectuals of twentieth-century Mexico. The evolution of ethnic Mexican indigeneity culminated with cultural extremists in the first half of the last century who assumed a neo-Aztec identity. They in turn gave way to the neo-Mexika identity that emerged in the second half of the twentieth-century in conjunction with the Mexikayotl ideology—“the essence of being Mexican.” Mexikayotl merged with a traditional dance form called danza azteca-chichimeca and made its way to the United States during the Chicano movement where it took root among culturally sensitive Mexican Americans. Chicanas and Chicanos embraced indigenous identities, such as Mexika and Coahuiltecan, and rejected the Latino and Hispanic homogenizing identities. In effect, this work is an intellectual history of the introduction, progression, and evolution of Indian identity among Chicana/os in Texas.

Abstract: This dissertation analyzes Fort Worth’s Mexican community from 1960 to 2000 while considering the idea of citizenship through representation in education and politics. After establishing an introductory chapter that places the research in context with traditional Chicano scholarship while utilizing prominent ideas and theories that exist within Modern Imperial studies, the ensuing chapter looks into the rise of Fort Worth’s Mexican population over the last four decades of the twentieth century. Thereafter, this work brings the attention to Mexican education in Fort Worth beginning in the 1960s and going through the end of the twentieth century. This research shows some of the struggles Mexicans encountered as they sought increased representation in the classroom, on the school board, and within other areas of the Fort Worth Independent School District. Meanwhile, Mexicans were in direct competition with African Americans who also sought increased representation while simultaneously pushing for more aggressive integration efforts against the wishes of Mexican leadership. Subsequently, this research moves the attention to political power in Fort Worth, primarily focusing on the Fort Worth city council. Again, this dissertation begins in the 1960s after the Fort Worth opened the election of the mayor to the people of Fort Worth. No Mexican was ever elected to city council prior to the rise of single-member districts despite several efforts by various community leaders. Chapter V thus culminates with the rise of single-member districts in 1977 which transitions the research to chapter VI when Mexicans were finally successful in garnering political representation on the city council. Finally, Chapter VII concludes the twentieth century beginning with the rapid rise and fall of an organization called Hispanic 2000, an organization that sought increased Mexican representation but soon fell apart because of differences of opinion. In concluding the research, the final chapter provides an evaluation of the lack of Mexican representation both in Fort Worth education and in the political realm. Furthermore, the finishing chapter places Fort Worth’s Mexican situation within the context of both Chicano history as well as identify some key aspects of the history of modern empire. This investigation poses pertinent questions regarding the lack of Mexican representation while African Americans end the century well-represented on the school board, in education jobs, and on the city council.

Abstract: This project compares mestizaje in Mexican American communities of the Texas-Mexico border and métissage in Franco American communities of the Maine-Canada border, from the pre-contact period to the 20th-century. Exploring the central themes of intermixing, borders, and identity, the paper shows the long-standing presence of mixed-ancestry groups in the U.S. and investigates how social and geopolitical borders have been used to racialize and exclude these groups from U.S. history, and, ultimately from acceptance as part of U.S. identity. The comparison of Texas’s Lower Rio Grande Valley and Maine’s St. John River Valley follows the development of these communities and recognizes the transborder relationships with their international sister cities. Family stories help show how the personal, local lives of borderlanders were interrelated with national and international events, and how locals responded. A comparative study of these two frontiers reveals the nature of geopolitical borders between international neighbors, the social borders created between groups within U.S. society, and the relationships that can bridge those borders.