TUSD board does not vote to re-integrate Mexican American Studies

Mexican American Studies in TUSD did experience a set back as one might expect with the political and legal battle that was finally resolved last fall.  It is sadly predictable to see that now there's foot-dragging, despite the court ruling.  Can't help but think about how this mirrors what's going on in Texas right now with our State Board of Education.
See my earlier post on this here.  Folks seriously have to either run good candidates for school board or State Board, as the case may be, or they have to run for office themselves.
-Angela
TUSD board does not vote to re-integrate Mexican American Studies
Wednesday, January 31st 2018, 12:27 am CST by Evan Schreiber
Updated:
Wednesday, January 31st 2018, 3:18 pm CST 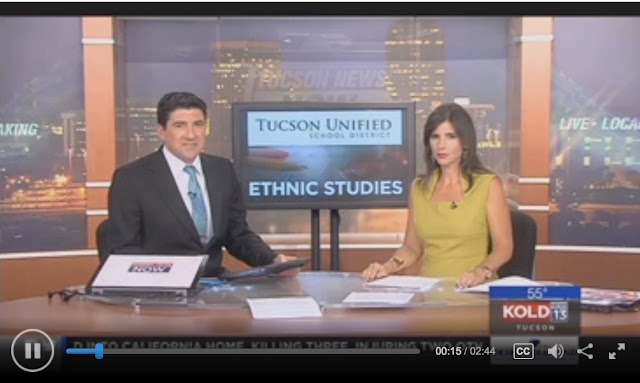 TUSD takes up Mexican-American studies
TUCSON, AZ (Tucson News Now) - By introducing a substitute motion the Tucson Unified School District (TUSD) governing board did not vote to re-integrate the Mexican American Studies program back into the district, as it was written in the agenda.
The agenda item had been introduced by board members Adelita Grijalva and Kristel Ann Foster and was put on hold during the Jan. 16 meeting.
Foster called it an "olive branch" to let teachers know that they had the support of the board and a way to remove the hardship educators endured during the ban.
Educators echoed that sentiment.
"The teachers that are teaching these courses need to feel that they can teach these courses and not be slapped on the wrist," said Cam Juarez, a Culturally Relevant Curriculum (CRC) board advisor, during the public comment section.

The controversial Mexican American Studies (MAS) program was controversially banned in 2010 and remained so until August 2017, when a federal judge ruled it unconstitutional.
On Tuesday night, Jan. 30, following an informational session presented by CRC education leaders regarding the current status of the courses, including a closer look at the 83 TUSD high school CRC course sections currently being offered, board member Rachael Sedgwick introduced a substitute motion.
Sedgwick's motion, seconded by board president Mark Stegeman, passed 3-1, with Foster abstaining and Grijalva the dissenting vote. Thus, it nullified Foster's and Grijalva's original agenda item.
Discussion on the original item lasted an hour as board members went back and forth. Grijalva said the goal was not to be controversial or divisive, but a message of support to the teachers.
"To have a conversation about if there's any success that can be made in order to reach these students in any other capacity, anything that we haven't done, then go do it. Go do it because this law is not around to stop us," she said.
Legal action against the ban had already been resolved, thanks to the 2017 ruling.  However, five months later, the board had yet to address exactly how they would bring the curriculum back.
"I cannot as a representative of community members say yes or no to this. I would much rather, that's correct, avoid the conversation, yeah," Sedgwick said, stating that the federal court order was clear and that the Foster/Grijalva item was "redundant."
In principle, Sedgwick's motion stated that the board would continue to maintain the status quo, now that the ban has been lifted. It would put the responsibility of a plan to move forward with the curriculum in the hands of those CRC educators.
Her motion stated that they understand there is a CRC department committed to those courses and has successfully been implementing them.
As far as a plan to move forward, the motion stated that the board is asking CRC directors to bring forward any curriculum changes through the standard revision process that has existed all along.
Copyright 2018 Tucson News Now. All rights reserved.

Posted by Angela Valenzuela at 10:16 AM