With DACA in Limbo, Teachers Protected by the Program Gird for the Worst

Glad to see Erica L. Green of the New York Times provide coverage on DACA teachers whose future is in limbo and fraught with fear and uncertainty.  One of them, Karen Reyes, teaches deaf toddlers in Austin, Texas.

Ending DACA will impact close to 9,000 teachers and countless numbers of children whose lives they touch and to whom we are simply indebted for their wonderful contributions in our nation's classrooms.

If a path to citizenship for DACA recipients does not happen—and we certainly hope that this is what will actually occur—we will look back on this chapter in our national history as one of the more shameful, oppressive ones.

With DACA in Limbo, Teachers Protected by the Program Gird for the Worst 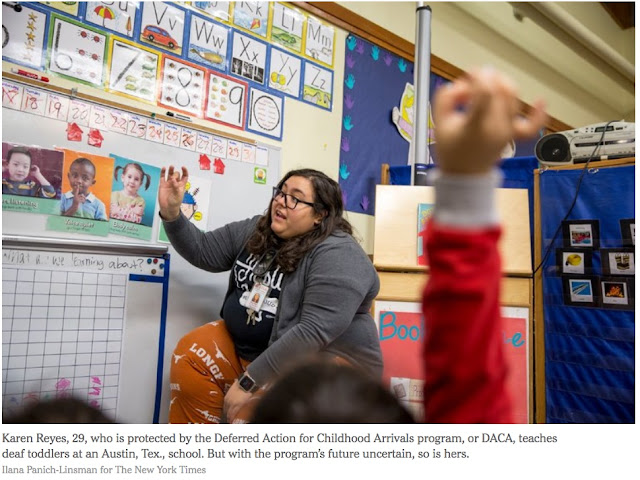 Karen Reyes spends her days teaching a group of deaf toddlers at Lucy Read Pre-Kindergarten School in Austin, Tex., how to understand a world they cannot hear.

For the first time in her four-year teaching career, Ms. Reyes, 29, is at a loss. One of nearly 9,000 educators protected under the Obama-era Deferred Action for Childhood Arrivals program, or DACA, Ms. Reyes has struggled to explain to her students, through sign language and pictures, the uncertainty of her future.

When President Trump rescinded the program in September, he gave Congress until early March to find a replacement before deportations are set to begin for the hundreds of thousands of young immigrants brought to the country illegally as children who gave their names to the government and were granted work permits. Ms. Reyes’s teaching days may be numbered — to 119 to be exact.
“I don’t know what I’m going to tell them,” Ms. Reyes said through tears. “They understand when I go on an airplane. Maybe they’ll just think I’m on a never-ending flight.”

Educators played a crucial role in helping young unauthorized immigrants realize DACA’s potential. The National Education Association, for instance, held clinics at which it encouraged eligible families to apply for the program, and worked with school districts to declare themselves “safe zones” for undocumented students and their families.

Much to the chagrin of educators and advocates, the program, created in 2012 by President Barack Obama, has become a bargaining chip for the White House. Mr. Trump has conditioned its codification in law on Democratic acceptance of tough demands, including an end to decades of family-based migration policies, a wall on the Mexican border and a crackdown on other immigrants in the country illegally.

“Every day, educators are being told to forget about the fact that at any given moment the rug will be pulled out of your lives and you may lose your job,” said Lily Eskelsen García, the president of the N.E.A., the nation’s largest labor union. “To see them treated in this despicable way, to see them treated as pawns, is just not fair.”

Mr. Trump recently said he supported a path to citizenship for DACA recipients who “do a great job,” a commitment he reiterated in his State of the Union address, which was attended by several DACA recipients — including Ivonne Orozco, who was recently named New Mexico’s Teacher of the Year.
Ms. Reyes resents that she has to prove her worth, beyond her use of her newfound freedom to teach in America’s classrooms.

“There’s so much pressure to be a perfect immigrant,” Ms. Reyes said. “They basically want us to save babies from burning buildings, have a 5.0 GPA and become doctors. But I’m just teaching these tiny humans to be great Americans.”

Ms. Reyes was brought to the United States from Monterrey, Mexico, by her mother at age 2. When she thinks of home, she thinks of the only one she can remember, in San Antonio — a big city with a small-town feel, where she and her grandmother would pick pecans from a tree in the front yard. Her childhood was “all-American,” she said, recalling late afternoons at marching band practice, at the Y.M.C.A. or selling Girl Scout cookies.

The only thing that distinguished her life from those of her friends was that she spoke Spanish at home, and her mother was strict. When she was 14, she found out why.

Her friends wanted to take a shopping trip to South Padre Island, then Laredo, on the Texas border with Mexico, but her mother forbade her from going because if she came upon an immigration checkpoint, she would not have the paperwork to pass.

“It changes the trajectory of your life,” Ms. Reyes said.

The barriers of being undocumented became more apparent after that — especially in applying to college. But with teachers’ help, she secured private scholarships for a graduate school program for special education teachers who wanted to teach the hearing-impaired.

She received her master’s degree from the University of Texas at San Antonio, and now educates six hearing-impaired 3- and 4-year-olds.

“It’s like a game of charades in my classroom everyday, but we have a lot of fun,” Ms. Reyes said. “We’re on a journey together.”

Hugo Arreola, who received DACA protection in 2012, is grappling with guilt.

Mr. Arreola works at the Phoenix high school from which he graduated, with 200 DACA recipients, many of whom he persuaded to apply for the program.

“Now, it’s basically putting their trust in the government to not abuse what started as an opportunity, to make deportation lists,” he said. “It’s a lot of anxiety and fear, and questions.”

Vicente Rodriguez, an aspiring English teacher, is preparing for the worst. Timing has not been kind to his journey. He was the only one of his mother’s five children born in Mexico, because a family emergency took her back home for a few months. His DACA permit will expire before he can complete his master’s program in teaching.

He said if he is forced to leave, he will still try to teach.

“I’m educated, so I can go anywhere in the world, but I wanted to be here,” he said. “I wanted to give back — to be that one good teacher a child remembers — in the country that gave me this opportunity.”

Across the country, teachers have grappled with the immigration debate’s aftershocks. They deal with crying colleagues, students acting out after a family member is deported and trembling when classmates talk about the past night’s news, and parents skipping teacher conferences and school events.

“It started at the beginning of this administration, where for the first time in history children cried over who got elected president because of the toxic campaign around immigrants,” she said. “Now, there are crying teachers.”

Educators for Excellence, a teacher-led advocacy group, has helped lead grass-roots efforts to urge Congress to codify DACA, circulating petitions and writing a letter to the president outlining the effects his policies have had on their students.

And teachers have turned their classrooms into safe havens for undocumented students and families.
“We all know we can’t focus on multiplication tables right now,” said Jessica Cuellar, a member of the organization’s DACA team and an assistant principal at a California charter school. “We’re just listening to them and trying to make them feel safe.”

Carlos Rodriguez, an eighth-grade teacher in Chicago, has used his experience to teach his students lessons of survival.

“We educators, we are in the trenches,” Mr. Rodriguez said. “We see these young people on a daily basis. We see the potential that we can maximize to benefit a country that they call their country. What are we waiting for?”

A version of this article appears in print on February 2, 2018, on Page A14 of the New York edition with the headline: Protected For Now, Teachers Await Fate.
Posted by Angela Valenzuela at 9:46 PM