Something’s Happening in Texas, by Adam Serwer, The ATLANTIC

Excellent piece on the complicatedness of the Latinx vote in our state.  I agree with the Beto campaign that it's not that we're a red state, but a non-voting one.

Culpability may be found in the Republican Party's machinations that delimit the vote through gerrymandering, voter ID, and a lack of candidates that could potentially inspire the Latinx vote.

The democratic party is also to blame for a woeful lack of underinvestment in the Latinx community.

Folks are understandably antsy about this election.  I tell them that Beto has already won.  He has inspired our state and nation.  And for that there is every reason to feel optimistic about the future of our country.

Please go vote if you've not already done so.  Put it on your calendar this evening for tomorrow.

The Republican Party’s future dominance of the Lone Star State, and the nation itself, relies on rigging democracy to its advantage. It won’t work forever.
6:00 AM ETAdam Serwer| The Atlantic 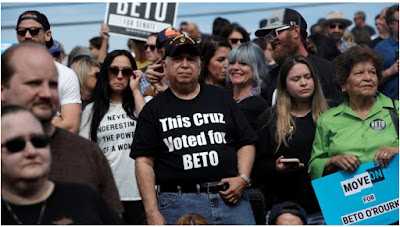 This year, I voted in Texas for the first time. It was complicated.
Registering to vote was simple enough. The post office had a form I could print out with my personal information and change of address. Because I don’t own a car, I had to Lyft to the Bexar County Elections Department and turn in my registration. Although I was more than a week ahead of the deadline, the sheer number of new registrations meant that I was not in the system until weeks after the deadline had passed. I was able to check online and see that I was registered, although my registration card did not arrive until several weeks later.
Obtaining an ID was another matter. Texas has one of the strictest voter-ID laws in the country. It is very selective about which IDs are valid—the Republican-controlled state legislature determined that military IDs and gun licenses are fine, but employee and student IDs are not—and to vote I would have to obtain a Texas state ID. I could get a driver’s license if I turned in my license from Washington, D.C., from where I’d recently moved, and as long as I brought proof of citizenship, proof of my Social Security number, proof of identity, and proof of residency. So I brought along my passport, W-2s, bank statement, insurance statement, phone bill, and D.C. driver’s license. The employee at the Texas Department of Public Safety who signed the piece of paper that would serve as my temporary license was named “Borders”; he made a joke about not crossing him.
Texas billed me $35 for my new license; with transportation to and from DPS and the Bexar County elections office, the cost of my registering to vote in Texas topped $80.* For anyone who is missing any of those documents and would need to obtain them, the price would be far higher. I work from home, so I have the privilege of being able to visit these facilities during working hours, and I can afford both the cost of transportation and the necessary documents. I live in the city, so public facilities are not difficult for me to get to. For people with more traditional jobs or who have less disposable income, these barriers stand much higher.

[Read: Progressives rooting for a Latino surge might be disappointed]

* The original version of this story misstated the cost of a license in Texas. We regret the error.
We want to hear what you think about this article. Submit a letter to the editor or write to letters@theatlantic.com.

Posted by Angela Valenzuela at 8:34 PM