Excellent, current information on Latino demographics. Internally, such as with what we are seeing in Austin, Texas, hundreds upon hundreds of Latinos, mostly Mexican Americans and Mexicans, are getting displaced.  Austin's numbers of immigrants are declining but not solely because of the macro-level factors implied here but because of the rampant pace of gentrification. Here is a good article on this such that a declining representation of the Latino demographic in cities like Austin must also take micro-level factors into account. 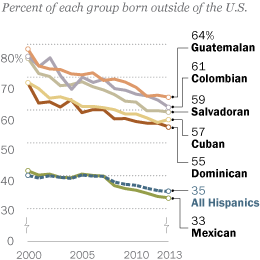 As immigration from Latin America slows, the immigrant share among each of the nation’s 14 largest Hispanic origin groups is in decline, according to a new Pew Research Center analysis of U.S. Census Bureau data. Overall, the share of the Hispanic population that is foreign born has decreased from 40% in 2000 to 35% in 2013.

Despite falling immigrant shares across all Latino origin groups, fast Latino population growth has led to continued growth in the number of Latino immigrants (though growth has slowed in recent years). Among all Latinos, there were 14.1 million immigrants in 2000. By 2005, that number reached 16.8 million, and by 2013, there were 19 million Latino immigrants in the U.S. The same pattern is present among all major Latino origin groups, though for three – Ecuadorians, Mexicans and Nicaraguans – the number of immigrants has declined since 2010.

The nation’s Latino population is its largest minority group, numbering more than 53 million, or 17.1% of the U.S. population, in 2013. It is also diverse in a number of ways. While Mexicans are by far the largest origin group at 34.6 million (making up 64.1% of all U.S. Latinos), the nation’s Latinos trace their roots to every part of Latin America. Puerto Ricans are the second-largest Latino origin group and represent about 9.5% of all U.S. Latinos. Beyond these two groups, no other makes up more than 5% of the U.S. Latino population. Cubans and Salvadorans, the two next largest groups, each make up just under 4% of the Latino population, with populations of about 2 million each.