Lawyers for the state want the Supreme Court to either dismiss or remand the lawsuit, arguing that this case is best decided by the legislature rather than the courts.

Yet, as we know, the legislature always wants to punt it to the courts.  Another problem is that the legislature isn't truly representative so that children's rights to a good public, education get compromised. 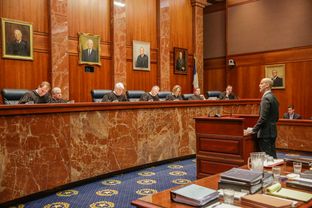 “Money isn’t pixie dust” when it comes to improving public schools, lawyers for the state of Texas told the state Supreme Court on Tuesday, arguing an appeal in what has been described as the most far-reaching school finance case in state history. They urged the high court to either dismiss or remand the lawsuit brought four years ago by nearly two-thirds of the state's school districts.
Lawyers for those 600-plus districts meanwhile argued the state had not given them enough money to achieve higher goals state lawmakers have set for the state’s more than 5 million public school students, imposing them “without knowing the true cost” by relying on decades-old cost estimates that do not account for the growing population of disadvantaged students who are more expensive to educate.

Districts sued the state in 2011 after state lawmakers slashed $5.4 billion from public education to help balance a post-recession budget shortfall. During the long-running lawsuit, they have argued that the Legislature is violating its constitutional duty to provide an adequate and efficient public school system, enacting large cuts even as rigorous new testing and accountability systems raised the bar on expectations.
Since making those cutbacks, however, lawmakers have added back more than 90 percent of what they took away — albeit unevenly — while also enacting policy measures aimed at reducing the burden on student performance.
During a nearly three-hour hearing Tuesday that saw the court shower all sides with tough questions, lawyers for the state urged the nine justices to either dismiss or remand the lawsuit because of the kinds of changes made this year. They also said that more money is not the answer.
"Funding is no guarantee of better student outcomes," said Texas Assistant Solicitor General Rance Craft.
But his boss, Texas Solicitor General Scott Keller, delivered what has emerged as the heart of the state's argument: That school finance should be addressed by the Legislature, not the courts — an argument at least one justice, Debra Lehrmann, pointed out the court specifically struck down a decade ago during the last school finance lawsuit. Others, including Justice Don Willett, appeared receptive to the claim.
Lawyer Richard Gray III, representing a group of 443 districts that was the first to sue, meanwhile told the court that "the output screams at you that this system is not doing what it's designed to do."
He noted stagnant scores on the state’s standardized exam known as STAAR, implemented in early 2012 just after the budget cuts took effect.
"The state can point to statistics that will make the system look better, but they choose to ignore their own standards, their own model," he said of the high-stakes test when Justice Eva Guzman asked about the state's high graduation rates.
"The STAAR test was the state's model that they developed to measure" student performance, he said. "And when they got the results that they got, which are abysmal by anybody's standards, then they run to other things and say, 'Oh but look at this,' and 'Oh, but look at that.'"
The school finance case was the first heard by the state’s highest civil court during its new term. The justices, who are all Republican, did not indicate Tuesday when they might rule, although some insiders and experts have speculated a decision could come shortly after the primary election next spring.
If the court rules well before the 2017 legislative session and at all favors the districts — or two other parties suing the state, including charter schools — it could force Gov. Greg Abbott to call a special legislative session.
As attorney general, Abbott — elected governor last year — appealed a lower court ruling against the state in the case directly to the state Supreme Court, on which he used to serve.
After considering changes lawmakers enacted in 2013, including a $3.4 billion funding boost to public education, the now-retired state District Judge John Dietz — a Democrat — struck down the state’s system of funding schools as unconstitutional last August. He cited inadequate funding and flaws in the way the state distributes money to the state's more than 1,000 regular school districts, and found that the system imposes a de facto state property tax.
Dietz also ruled against two groups that do not represent traditional school districts — Texans for Real Efficiency and Equity in Education and the Texas Charter Schools Association — whose lawyers also argued before the state Supreme Court Tuesday. Dietz concluded that the Legislature was the more appropriate entity to address the issues they raised at trial.
Later Tuesday, Texas Attorney General Ken Paxton said the same should apply to school districts, elaborating on the solicitor general's jurisdictional argument — also advocated by Abbott in an amicus brief filed with the court ahead of Tuesday's hearing.
“This issue is best dealt with by the Legislature, the elected representatives of the people of Texas, and not by the courts," Paxton said in a statement released after the hearing. "Texas education must be about properly educating students, not endlessly battling in court.”
During the hearing, lawyers for school districts asked the justices to uphold Dietz’s ruling, pointing to sluggish STAAR scores and difficulty getting students ready for college or careers after graduating high school.
“We are not preparing students for the 21st century,” said former state Supreme Court Chief Justice Wallace Jefferson, who is representing schools in the lawsuit.
"Now is not the time to abandon judicial review," he said in his opening remarks, alluding to the long history of courts forcing state lawmakers to address the way the state funds its schools — and addressing the state's jurisdictional argument.
The current case is the seventh time since 1984 that a case challenging the state’s school finance system has reached the state’s high court, which partly sided with school districts in 2005 although it rejected their argument that the state was not providing adequate funding.
During Tuesday's hearing, lawyers for the state pointed to high graduation rates and slightly improving test scores as evidence that school districts are slowly but surely reaching the benchmarks the Legislature has set for them.
The public education system is “currently working toward its goals and is thus constitutionally adequate,” Craft said.
Posted by Angela Valenzuela at 10:18 AM