Chicana(o) Studies and the Creative Activity of Being

Cool statement in the column below by Gustavo Arellano on Cal State L.A.'s Department of Chicana(o) and Latina(o) Studies, celebrating its 50th anniversary.

"Chicana(o)" itself draws unnecessary criticism, primarily because it isn't an identifier for many who call themselves "Mexican American," "Latina/Latino," or "Hispanic."  It's a regional term to a great extent with Chicana(o) being more of a California, than Texas, term, but which is also used throughout the Southwest, and to some extent, in Mexico, too.  I don't want to understate any of this as "Chicana(o)" is still a viable term today, Texas included.  Take for example, the Chicano/Hispanic Law Students Association at the University of Texas at Austin, or Chicana/o Studies at The University of Texas at El Paso. Many of us also regularly use the term either in our teachings or as a matter of course.

However, it's also a generational term associated with civil rights, as reflected in organizations today like the Texas Association for Chicanos in Higher Education) which was founded in 1974 in the heyday of the "Chicana(o) Movement" (also referred to as the "Mexican American Civil Rights Movement").

I became a "Chicana" back in the early 1970s when I was in middle school in my West Texas hometown of San Angelo.  I was already a Mexican American, but I chose to identify with the Chicana(o) Movement not only because my family, especially my grandparents, were always involved in the defense of civil rights in my hometown community, but also because it connected me to the Mexica (pronounced "Me-shica" [or "Aztecs"]) which is believed to be the source of the term: "Me-xicana(o)" became "Xicana(o)," or Chicana(o).  (Note: There are other theories on the origins of the term, but this seems to me to be the most logical.)

According to Mexico's census bureau, Instituto Nacional de Estadísticas y Geografía (INEGI), in 2015,  25,694,928 people in Mexico, or 21.5% of Mexico's population, self-identified as indigenous, with well over 1.5 million speakers of Nahuatl, the language of the Mexicas, alone.  That is why the migrant stream tends to be more darkly hued, rather than fair-skinned.  Despite their construction as "immigrants" in the context of a nation state that is itself a modern idea that represents the smallest part of the history of peoples native to this continent, they are actually "migrants" that have always navigated the continent, North and South, East and West sin fronteras, without borders.

That said, for many Chicana(o)s, "Aztec" is a metaphor for the deep, ancestral identification with, and connection to, the peoples of this continent, as a whole.

As with all Ethnic Studies courses, in general—and as the column below lays bear—despite its critics, Chicana(o) Studies is unapologetic and here to stay.

Chicana(o), or Mexican American Studies, moves our youths' imaginations away from paralysis and powerlessness toward "the creative activity of being" as eloquently expressed by Lugones (2010) in her pathbreaking analysis of gender.

Shouldn't this be what all education is about?

Thanks to Juan Tejeda for sharing.

The ethnic studies kids are alright 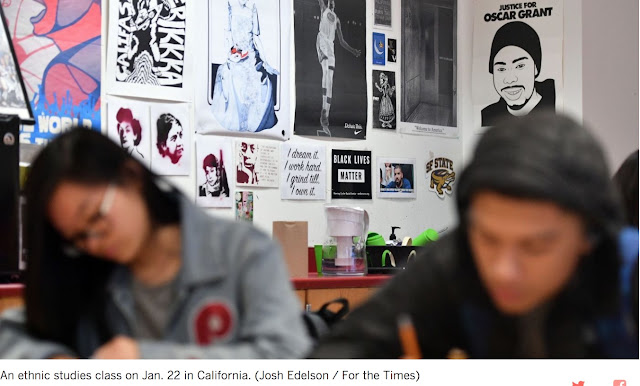 Up for a fiesta? On Thursday, Cal State L.A. will hold a shindig complete with a mariachi, a new song by ’70s punk icon Alice Bag, and a keynote speech by labor activist Dolores Huerta. The occasion is the 50th anniversary of the school’s Department of Chicana(o) and Latina(o) Studies — their grammar, not mine — the nation’s first such department.
The nostalgia will be heavy, but so will the sense of accomplishment. Although college attendance rates for Latinos are still too low, Cal State L.A. showed a partial solution that still works: education by Chicanos, for Chicanos, to improve themselves and the community as a whole.
There’s always been a cadre of critics of the ethnic studies concept, but Chicano studies has drawn particular disdain because of that unapologetic approach. Opponents claim this type of curriculum teaches students to believe they’re perpetual victims of white America and preaches self-segregation and seditious behavior. Writer and historian (and Cal State Fresno professor emeritus) Victor Davis Hanson is typical of such naysayers; he once wrote that programs “too often graduated zealous advocates who lacked the broad education necessary to achieve their predetermined politicized ends.”
In other words, Chicano studies just creates dumb activists.
I used to be such a skeptic. I ridiculed Chicano studies as achieving little more than inspiring third-generation Mexican Americans from Whittier to change their name to Xipe or Xochitl from Bryan or Yennifer. And there remains a strain of quien-es-mas-woke groupthink among scholars that I find counterproductive and a waste of time.
There’s always been a cadre of critics of the ethnic studies concept, but Chicano studies has drawn particular disdain because of that unapologetic approach.
But on its golden anniversary, it’s time to recognize Chicano studies not as a movement apart from the state, but very much of California. Cal State L.A. sparked a revolution that extended far beyond the ivory tower.
My epiphany came earlier this decade, when Cal State Fullerton’s Chicana and Chicano Studies Department invited me to teach a class on the history of Mexican Americans in Orange County. Over a semester, I taught students hidden histories and forgotten heroes — and then made them ask why those stories never made it into the official narrative of Southern California. Why, for instance, do city fathers and amateur historians pass off O.C.’s era of citrus ranching as a bucolic, fragrant yesteryear — but skip over the Mexicans who picked oranges and lemons for pennies and were forced to live in segregated communities? Why do they accuse Chicano studies professors who expose such nasty aspects of being historical revisionists? Indeed, who is the revisionist in this context?
By teaching Chicano studies, I learned its real agenda. Its mandate is to push students to explore, question and act based on empirical truth, no matter how inconvenient that may be to others. We expect them to come away with a sense of pride in an ethnic group long disparaged. And although my fellow teachers may be loath to admit it, Chicano studies’ ultimate purpose is to instill a bootstrap philosophy even conservatives can love: Help your community by first improving yourself.
That mentality worked wonders. Mexican Americans wrote themselves into history books as something other than gay caballeros, evil bandidos, spicy señoritas or faceless farmworkers. As it evolved, Chicano studies became interdisciplinary, the better for students to see there are many ways to help society and realize there is more to learning than what’s in a classroom. Courses now address public health, education, politics and even math (the Mayas were one of the first societies to use the concept of zero, after all).
Chicano studies also forced Mexicans in the United States to confront our own pathologies. For instance, it taught solidarity with Mexicans who immigrated to the United States illegally — something we take for granted nowadays, but that was downright revolutionary in the late 1960s when the United Farm Workers railed against “wetbacks.” Professors have been the de facto older brothers and sisters to students who are the first in their family to attend college — some of whom are encountering Latino professionals for the first time. Female scholars have tackled machismo; LGBTQ profes, homophobia. A new generation of undergrads has pushed Chicanosauruses like myself to question our own privilege and inherent biases.
I haven’t taught a Chicano studies class in years. But I keep in touch with many of my students, who went on to become police officers and journalists, social workers and small-business owners, teachers and real estate agents. They might not use my lecture lessons day-to-day, but I know the class and other courses they took helped them on the road to success — because many of them continue to tell me so.
The California Legislature is trying to make one semester of ethnic studies a statewide high school graduation requirement and a bill funding pilot programs is headed to the governor’s desk this week. Those who oppose the idea obviously have never taken a Chicano studies course. I urge them to do so. They’ll find a roomful of young Latinos learning that they, too, are a part of this state and country and should contribute to it. What a radical concept.
mexicanwithglasses@gmail.com. Twitter: @GustavoArellano
Posted by Angela Valenzuela at 10:35 AM