Check out Dr. Rincón's excellent blog, too.  It is titled, The Culture of Research.  -Angela 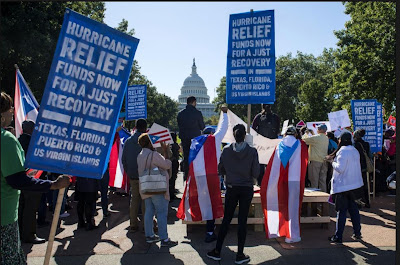 If you were under the impression that ethnic cleansing takes place only in other countries with maniacal dictators, perhaps it is time to reflect on the recent behavior of President Trump in regards to recovery efforts in Puerto Rico following Hurricane Maria.  By some accounts, the disaster recovery in Puerto Rico was a clear example of the deliberate and prolonged neglect of a large segment of U.S. citizens.


An estimated 3,000 Puerto Rican residents died as a result of Hurricane Maria – not just from the immediate storm but also from the inadequate recovery efforts that allowed too many victims to suffer from the limited access to clean water, food, transportation and medical attention. The level of human misery in Puerto Rico, which continues to this day, was apparently of little consequence to President Trump who boasted that the recovery effort was one of the most successful in U.S. history.  Making matters worse, President Trump even now rejects the estimate of 3,000 deaths from Hurricane Maria, suggesting that the high death estimate was merely a political ploy by Democrats to “make me look bad.”

Trump’s suggestion that the 3,000 deaths resulting from Hurricane Maria was a political ploy by Democrats is consistent with other conspiracy theories that point to his detachment from reality, including such things as:

President Trump has made no secret of his disdain for Puerto Rico and its leadership, even delaying the waiver of the Jones Act to expedite the delivery of needed resources. Indeed, his disdain for other non-white and immigrant groups has been shown through statements and policies, including the separation of Latino children from their families;  legal action to end the DACA program;  travel restrictions based on religious beliefs;  and the consistent derogatory statements made in reference to Mexicans,  Haitians, black athletes, and war heroes like the late Senator McCain.  More recently, the Trump administration announced the transfer of $10 million from the FEMA budget to ICE  -- an action that further underscores the priority placed on the removal of unwanted groups. Perhaps it is time to ask: Is President Trump developing a program of ethnic cleansing?

As defined by a United Nations Commission, ethnic cleansing is defined as follows:
“….rendering an area ethnically homogeneous by using force or intimidation to remove persons of given groups from the area… a purposeful policy designed by one ethnic or religious group to remove by violent and terror-inspiring means the civilian population of another ethnic or religious group from certain geographic areas. “
Since he became president, Donald Trump has implemented a number of programs that could fall under this definition of ethnic cleansing,  including  arbitrary arrest and detention; confinement in ghetto areas (i.e., families in detention centers); forcible removal; displacement and deportation (i.e., even asylum seekers);  deliberate attacks or threats of attacks on civilians (i.e., especially protestors at campaign rallies); and robbery of personal property (that is, seizure of personal property from forcibly removed persons).

Without intervention by legal advocates and human rights organizations, one wonders how many of these most coercive practices President Trump would implement given the opportunity and growing support by his conservative base.  Yet, the withholding and delay of needed emergency assistance and the resulting 3,000 deaths of Puerto Rican citizens presents tangible evidence that President Trump has added a new dimension to the ethnic cleansing formula.


Apparently, it is not enough to separate families, deport asylum seekers, place immigrant children in detention centers, and publicly disparage immigrants and non-whites – it now appears acceptable to simply delay or withhold emergency assistance in order to punish or remove unwanted segments of the U.S. population.  To say the least, this is a disturbing development and made equally frightening by the many “pro-life” Republicans who choose to remain silent on this issue.

Posted by Angela Valenzuela at 4:12 PM