We as a society have to think of the cost of not educating these young people housed in these detention centers.  But one still can't help but wonder what kind of education these children are getting given a lack of transparency coupled with Dr. Michael Olivas' comments below who notes that it's subpar. 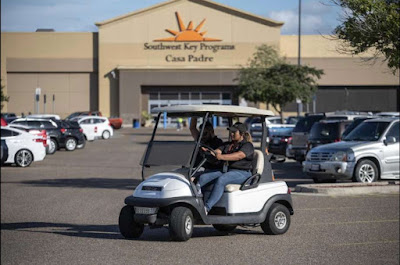 Texas school districts and charter school groups cannot use state funding to provide teachers and other resources to school-aged children housed in migrant shelters, the Texas Education Agency said, throwing into question whether states have a role in educating minors who cross the border illegally.
Officials with Southwest Key, one of the largest nonprofits operating shelters for migrant children in Texas, said the agency’s stance jeopardizes partnerships the shelters have formed with at least two traditional school districts, one of which began in 2013.
Prior to the TEA letter sent to the Promesa Public Schools on Aug. 21, the Harlingen Consolidated Independent School District had received about five years of state funding to place one teacher and one paraprofessional in a Southwest Key shelter located within their boundary. This year, the Associated Press reported San Benito CISD sent 18 of its teachers and technological resources to Southwest Key’s Casa Padre shelter, hoping to receive an additional $2.8 million in state funding by including the shelter’s students in its enrollment numbers.
Salvador Cavazos, vice president for education services for Southwest Key, said the shelter group has nixed its agreement with San Benito CISD, meaning all 18 teachers will leave the shelter. Cavazos is working with Harlingen CISD to work out a possible cost-sharing arrangement.
Cavazos said most of the students at his group’s shelters eventually will transfer to traditional or charter schools once they are released to family members and await asylum or immigration hearings. Partnerships with education groups would have helped ease that transition, he said.
“I think the ones that ultimately are affected adversely are the youth that are in the shelters,” Cavazos said. “Because we’re in a partnership, we would have been able to provide additional resources, partner with credit-bearing institutions, provide grades and help them achieve credits go to other public schools.”
The TEA’s decision comes after President Donald Trump’s administration separated families under a “zero tolerance” policy for migrants who cross the border illegally. Parents served brief prison time for the misdemeanor before being transferred to immigration detention and their children were placed in federal shelters for unaccompanied minors.
Facing widespread condemnation, Trump rescinded the policy in June, but reuniting parents with their children has proved difficult and nearly 600 children remain separated from their parents and in federal shelters.
That has added to an already high number of unaccompanied children in shelters, an influx which began in 2013 as many came here escaping violence and poverty in Central America. Between October and July, more than 41,300 children have come here alone, according to federal statistics, and usually stay in government shelters for about a month before many are released to family members here. Some can stay for longer if they do not have relatives here or the government decides it is not in their best interest to release them.
The wave of minors across the southern border has raised questions about what role, if any, states should play in educating those children. In a statement, the TEA said that responsibility falls squarely on the shoulders of the federal government. The U.S. Immigration and Customs Enforcement mandates school-aged children housed in shelters must have their educational needs assessed within three days of arrival, receive six hours of structured instruction on weekdays and receive special education services if they are eligible.
While the TEA said schools still could voluntarily provide help to shelters, school leaders across the state say their schools have been dealing with declining state funding for years, circumstances that make it infeasible to pay to provide services to students who are not technically enrolled in their districts.
Cavazos said Southwest Key and other shelters already provide education services to school-aged children in their care. At the shelters he oversees, students receive six hours of instruction during weekdays. The classes are self-paced, and Cavazos said the teachers who work with migrant students all hold bachelor degrees.
Michael A. Olivas, who teaches immigration and education law at the University of Houston, said the services provided by Southwest Key alone are inadequate to meet students’ needs.
“It is a detestable lie that they’re being educated. They have some books, they have some adults who are not always certified teachers, but they’re not offering real classes,” Olivas said. “Would you put your kid in a class like that, that is self-paced with no certified teachers?”
Cavazos disagreed. He said that as a former teacher, principal and superintendent — including at Goose Creek CISD in greater Houston — he knows what a good education looks like and has seen excellent teaching in Southwest Key’s shelters.
“We have to remember the structure of how these young people enter the country and end up in a shelter. It is the structure that is in place in the U.S. It isn’t an option for them to go to a public school,” Cavazos said. “I’m not sure it’s such a good thing for them to go into regular high school and middle school, with the trauma they’ve experienced by being in country unaccompanied, without wraparound services.”
TEA Letter to Promesa Public Schools by Houston Chronicle on Scribd
Posted by Angela Valenzuela at 2:44 PM