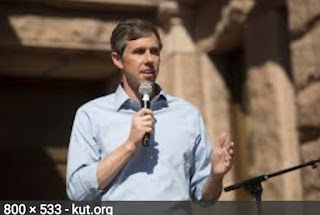 I wasn't able to see Beto during his recent trip to Austin but was thrilled to hear how he spoke about progressive causes and in particular, against high-stakes testing in our public schools.  That it would even roll easily off the tongue of a senatorial candidate was heartening to me. It means, among other things, that he has his ear close to the ground, listening to teachers and parents, and the kinds of things that need to be changed.
If you're not registered to vote and want to vote in this November's general election, you must register to vote by October 9. Here's how:

1) Fill this out online: https://webservices.sos.state.tx.us/vrapp/index.asp

2) Print and mail it to the registrar in your county of residence.


If you are registered but moved to a different county, all you need to do is update your information online here: https://txapps.texas.gov/tolapp/sos/SOSACManager…
Not sure if you're registered or not? Check here: https://teamrv-mvp.sos.texas.gov/MVP/mvp.do
This status is public, for anyone interested in sharing.

Austin, TX – In a sign of just how crucial the millennial vote might be in the upcoming mid-term elections, a statewide poll released Tuesday shows Ted Cruz leading 47 percent to Beto O’Rourke’s 44 percent among likely Texas voters. Forty-nine percent of Texans between the age of 18-39 identify as supporting O’Rourke, while Cruz’s strongest support comes from voters ages 40 and above.

The Crosswind Texas Pulse Poll also hinted at some dissatisfaction toward Cruz from his own party: While the poll indicates an almost-equal party vote – with 81 percent Republicans favoring Cruz and 83 percent Democrats for his opponent – a surprising 15 percent of Republicans indicated their intent to vote for the Democrat. Forty-six percent of respondents who did not identify with either major party signaled their intent to vote for O’Rourke, versus 39 percent of non-affiliated or independent voters intending to pull the lever for Cruz.

Fifty-five percent of Hispanic voters and 57 percent of Black voters also expressed an intent to vote for O’Rourke, while 52 percent of white voters indicated their support for Cruz. However, 56 percent of voters who do not identify as white, Hispanic or Black also responded positively for Cruz. Only slightly more women overall support O’Rourke than Sen. Cruz, at 47 versus 42 percent.

“Texans are in for a nail-biter that has national implications,” said Crosswind CEO Thomas Graham. “O’Rourke is showing surprisingly strong support in traditionally red-state Texas, and Cruz has the edge in organization at this point, but clearly O’Rourke is gaining some ground.”

Meanwhile, Texans clearly favor incumbent Greg Abbott, who is holding steadily in his race against Lupe Valdez, although her 39 percent – to Abbott’s 52 percent – is likely to catch state GOP leaders by surprise. The poll results largely mirrored that of the senate race demographically and along party affiliations, although 45 percent of Texas women are showing more support for the current governor than for challenger Valdez’s 43 percent female support.

Among voters who do not identify as either Democrat or Republican, 47 percent seem more inclined to identify with Abbott on election day, versus 36 percent for Valdez.

The Crosswind Texas Pulse Poll, a periodic survey of Texans’ opinions on a variety of cultural, economic and political issues, was conducted by Crosswind Media & Public Relations from September 6-9, 2018. The survey included 800 likely voters in Texas. The margin of error is +/- 4 percentage points with a 95 percent level of confidence.

Asked about the most important issues facing Texas, the state’s likely voters mirrored responses from the 2016 Texas Pulse Poll, with 33 percent naming immigration and border security as the top issue. This is 4 percent higher than that issue’s ranking in the 2016 poll.

However, this year’s poll noted one striking change from two years ago: Whereas in 2016, 24 percent of likely voters placed economy and jobs as their second most important issue, this year health care and education reared as a priority. Seventeen percent named health care as their pressing issue, with 16 percent naming education, and the economy and jobs garnering almost half of last year’s ranking at just 13 percent.

“The prominence of more social issues of health care and education could help explain the closing gap between our high-profile candidates, since Democratic and liberal voters tend to identify more closely with social issues than economic ones,” explained Graham.

Crosswind also polled likely Texas voters on their overall opinions of the senate and gubernatorial candidates, with Cruz and O’Rourke coming out almost even on “very favorable” at 34 to 33 percent, respectively. However, 33 percent of likely voters hold a “very unfavorable” view of Cruz, with only 26 percent indicating that level of displeasure for O’Rourke.

For more information or for a copy of the poll results, send a request tomedia@crosswindpr.com.

Crosswind Media & Public Relations is one of the leading firms in the U.S., ranking in the top 100 nationally. Headquartered in Austin, Texas, the agency has offices in Washington D.C., Los Angeles, Houston, Dallas and New York. While Crosswind’s roots are in Texas, it has a global reach, serving corporate clients, public agencies and national governments across five continents. It specializes in brand management, crisis communication, thought leadership and event planning and serves clients in the energy, infrastructure, entertainment, education, technology, banking & finance, health care sectors. For more information, go to http://www.crosswindpr.com or email info@crosswindpr.com.

Posted by Angela Valenzuela at 7:00 AM