Letters To The World From Willie Velasquez

The late Willie C. Velasquez is a beloved leader in the Mexican American community of Texas and beyond for many reasons, including his passionate devotion to expanding the vote to the Chican@/Latin@/Mexican American community.  He was not a perfect man, as you can hear for yourself below by his wonderfully written letter read by author extraordinaire, Barbara Renaud Gonzalez.
Renaud Gonzalez has written her own Young Adult book on Willie Velasquez titled, "Dear San Antonio, I’m Gone but not Lost. Letters to the World from your Voting Rights Hero Willie Velasquez on the Occasion of his Rebirth."
I love what Renaud Gonzalez says about Mexican American Studies—the genre into which this book fits—in her comments that you yourself can listen to below.

We all owe so much to Willie Velasquez.  Her love for him—which is what I think we all should also share—is palpable and moving.
Congratulations, Barbara!  I am very excited to see your book on him coming out soon!
-Angela Valenzuela

Fronteras Extra: Letters To The World From Willie Velasquez 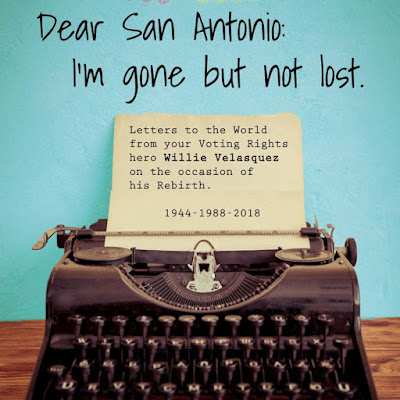 Willie Velasquez grew up on San Antonio’s West Side, and learned early on that by empowering his fellow Latinos, they could bring change to their own neighborhoods.
In 1974, Velasquez founded the Southwest Voter Registration Education Project and organized 1,000 voter drives across the Southwest. His efforts also more than doubled the number of Latino elected officials, from 1,500 in 1974 to 3,300 in 1988.
Velasquez died in 1988 at 44. Writer Bárbara Renaud Gonzalez has resurrected him in her new book, “Dear San Antonio, I’m Gone but not Lost. Letters to the World from your Voting Rights Hero Willie Velasquez on the Occasion of his Rebirth.” In the book geared towards young adults, Velasquez responds to God’s request to reflect upon his life.
Listen
Listening...
1:14
/

4:14
Bárbara Renaud Gonzalez reads a letter by Willie Velasquez from her book "Dear San Antonio, I'm Gone but Not Lost." 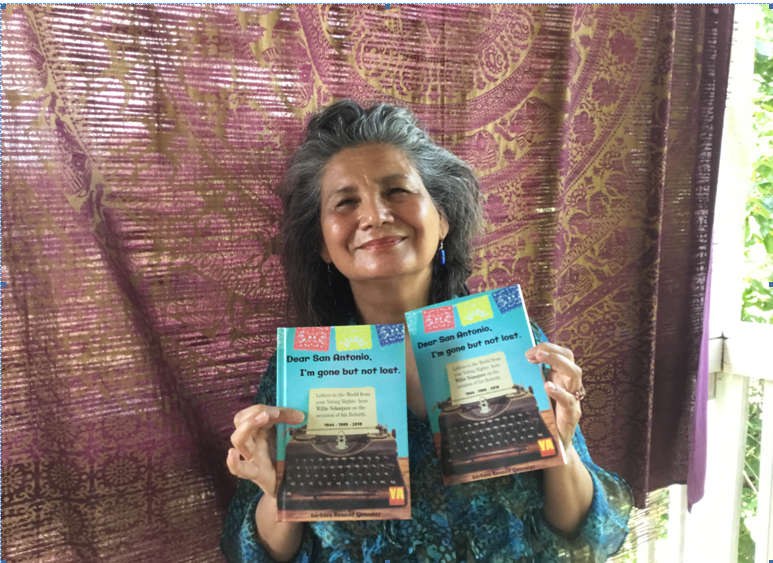 Bárbara Renaud Gonzalez
CREDIT DENISE MCVEY
Renaud Gonzalez said that Velasquez’s activism often drew the ire of more mainstream Latino politicians, including former San Antonio Congressman Henry B. González.
Listen
Listening...
2:04
Bárbara Renaud Gonzalez talks about Willie Velasquez's often prickly relationship with former Congressman Henry B. Gonzalez and former San Antonio Mayor Henry Cisneros.
“(González) was basically a political god – demigod – of San Antonio. … He was a mentor of Willie Velasquez,” said Renaud Gonzalez. “Ultimately, they split. They had a difference of opinion. Willie was very caught up in the Chicano movement, calling himself a Chicano, involved in the farm worker struggle. Henry B. did not appreciate that.”
Renaud Gonzalez has hopes her book and the lessons Velasquez was trying to share with the Latino community will be embraced by teachers and students in Mexican-American studies courses.
Listen
Listening...
2:55
Bárbara Renaud Gonzalez expresses hope that young people will learn the meaning of democracy through the lessons of Willie Velasquez.
She was recently talking to students at a San Antonio high school and was surprised to find they did not know about the Voting Rights Act, which prohibited discrimination in voting.
“I cannot impress enough that our democracy fails or succeeds depending on how young people in the inner city schools understand democracy, understand voting,” said Renaud Gonzalez. “It’s essential. It’s tragic. Hopefully the story of Willie Velasquez … will give them a sense of purpose. We need to have meaning in our lives.”
Local release date is Oct. 28. National launch date is Nov. 2 at the Guadalupe Cultural Center.
Norma Martinez can be reached by email at norma@tpr.org and on Twitter @NormDog1
Posted by Angela Valenzuela at 1:19 PM