Read about one of the largest workplace raids in 10 years

I don't have a date for this publication in the Houston Chronicle but this raid happened recently in Paris, Texas on the morning of August 28, 2018.  Paris is located north of Dallas by the Oklahoma border.

These folks are here to work.  They mostly also do jobs nobody else wants to do.  The vast majority are not refugees, but in fact come to the U.S. because of the allure of U.S. jobs.  And then to treat the this way is unconscionable.

What happened to these workers and their families is heartbreaking.  And it has been injurious to an entire community.

After Paris immigration raid, Can a community come together? By Emily Foxhall | 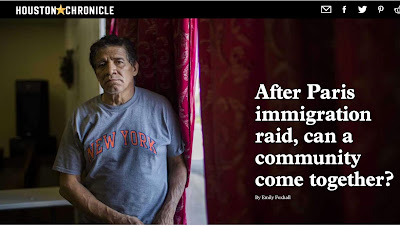 PARIS — When he heard the helicopter, Juan Esquivel was halfway through his 6 a.m. shift at Load Trail, a northeast Texas trailer manufacturer. Maybe someone needed a medical evacuation, he thought.

He was wrong.
Federal agents were swarming the property near the city of Paris that morning on Aug. 28. They rounded up 159 employees who they believed immigrated here illegally, including Esquivel, who is 39 and has lived in the United States for 23 years.
The event was big news in the area, where voters overwhelmingly supported President Donald Trump. Some found themselves grappling with the personal consequences of hard-line immigration policies on their neighbors. Others continued with life as usual, standing strong in their views that deportation is deserved for people who come here illegally.
The aftermath of the raid, which officials said was one of the largest workplace raids in the last decade, continues to reverberate here and in the nearby communities where many of the workers live, illustrating the stark divisions within the country's immigration policy, and Trump's zero-tolerance enforcement of the law.
RELATED: Keep up with all of our immigration coverage here
The 147 men and 12 women detained are now enmeshed in immigration proceedings that may alter their lives. As they wait, their suffering has been largely private, with some relatives afraid to leave their homes. Criminal charges are expected in the case against the company, founded by an immigrant. At least one person detained is already being deported.

Esquivel came to the United States from Mexico with a visa and never left. He made more money here than he believed he could back home. He returned after each shift to his wife and two daughters in a quaint nearby town called Honey Grove.
"We came to do one thing, and that's work," Esquivel said. "We were in Honey Grove. Nothing can go wrong."
At 10:27 a.m. that morning, Esquivel sent a text message in Spanish to his wife: Immigration is here.
She was at home making tostadas, expecting him to return that afternoon.
At 12:20 p.m., he sent another message: They have us. 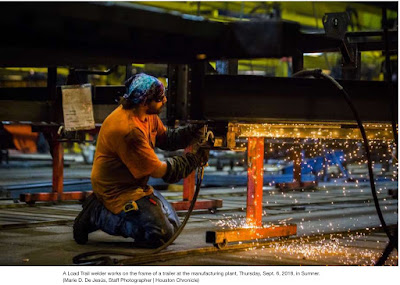 ■■■
Cornelius Thiessen, the founder of Load Trail, moved his family in 1995 from a small town in Mexico to Paris. The city today is home to 25,000 people, plus an Eiffel tower replica, topped with a red cowboy hat.
But beneath that whimsy lies a racist past, said 60-year-old Brenda Cherry. A horrific, public lynching occurred in 1893. A confederate statue next to the county courthouse is dedicated to "our heroes." To Cherry, the city remains divided.
"For me at least, Paris is very racist, but there is a denial that it is," said Cherry, who is black.
Here, Thiessen sought safety for his family, recounted Kevin Hiebert, 35, the chief executive officer of Load Trail. Thiessen's brother started a company in the rural landscape outside of town, and Thiessen did the same. He immigrated using an investor visa, reserved today for those who invest a minimum of $500,000 in a business.
Thiessen was a Mennonite, a persecuted religious group that sought sanctuary in Mexico, among other places. His business, like his brother's, makes steel trailers used by landscapers and farmers. Thiessen ran the company until he died in 2015. Load Trail went to his children, who hired Hiebert to take charge.
When he started the job, Hiebert knew Load Trail had gone through an immigration audit in 2014, which the Dallas Morning News reported resulted in a $445,000 fine. Afterward, the company put in place a software system to verify Social Security numbers, attorney Gene Besen said. Load Trail hired consistently since then. By 2018, the company employed roughly 700 people.
"Currently, our efforts are focused on conducting our own investigation to ensure we know all the facts and circumstances that contributed to the events of two weeks ago," Besen wrote in a statement Thursday. "We expect to cooperate with [the] DOJ and demonstrate that the company has always endeavored to comply with all applicable laws."
DEEPER UNDERGROUND: Fear runs rampant in immigrant enclaves
The raid surprised Hiebert. He declined to comment on whether he knew people worked there without proper paperwork. But he wanted to discuss immigration policy, and why it seems Americans cannot talk to each other about it.
"We've seen outpouring of support from very unlikely people," Hiebert said. "I think if we can use our experience in any way to positively move the discussion forward, we owe it to the industry. We owe it to the community. We owe it to the good people that we lost in this. 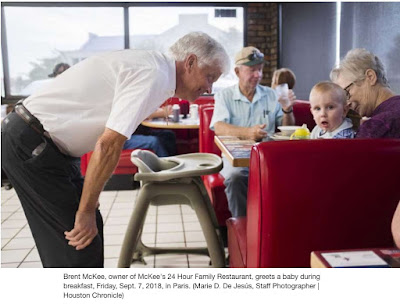 Posted by Angela Valenzuela at 7:40 PM