This research by Bruce Fuller and colleagues perpetuates dangerous myths—particularly about Mexican mothers—and readers should consider how either the opposite of what is concluded here is observed elsewhere or a more critical view is offered that suggests how schools and society deprive our youth of resources that are important to success in life.


Education scholar, Dr. Laura Alamillo at Cal State University Fresno, is currently conducting research on Latina mothers that shows that they reading to their children at home in two languages.  I work with immigrant, Mexican parents, too, and know that they also work closely and intensely across two languages yet our schools—pre-K included—systematically fail to provide their teachers with the language supports that they need in order to carry out the kind of effective pedagogy that our bilingual children need.

We've had many a community discussion on these things here in Austin, Texas, and our very own bilingual teachers AT ALL LEVELS—pre-K included—voice these concerns with a extreme dearth of curricula, books, and materials that are not only linguistically appropriate for bilingual learners at ALL levels of development, but that once you parse it out, don't even speak to the Mexican or Mexican American experience in the U.S.  In my own work, I call this "subtractive schooling."  I don't have time to go into the manifold, historic, ideological, and layered reasons why this is so, but want to take the opportunity to share that we are doing something about this.

This involves a partnership involving Nuestro Grupo (our community based organization organized by the Texas Center for Education Policy and the Tejano Monument Curriculum Initiative, both at the University of Texas at Austin and the National Latino/a Education Research and Policy Project [NLERAP], its fiscal agent and national nonprofit organization), the Austin Independent School District, the City of Austin Parks and Recreation Department and within it, the Emma S. Barrientos Mexican American Cultural Center where the Saturday academy takes place.

We have developed curriculum in migration/immigration, civil rights, and local history.  We are currently extending this curriculum to indigenous heritage, women, and the cultural arts. Moreover, all that we have developed is available to students district wide—currently in grades 3, 4, 5, 6, 7, and 11.
Consider liking us on Facebook where you can see video of some instruction there: https://www.facebook.com/AcademiaCuauhtl

Also check us out on our AISD Website: http://www.austinisd.org/academics/cuauhtli

AISD Chief Academic Officer, Dr. Pauline Dow, and so many others have demonstrated incredible leadership in this regard.  I am so happy an honored to be a part of this initiative.

Though I am sure the authors of this research study didn't intend this to be so, they nevertheless offer a deficit perspective of what they say Mexican mothers and children presumably do not have, rather than a study conducted from a research lens of what they do have.  After all, a way of seeing is also always a way of not seeing.

Just as importantly, these authors also didn't situate their work in a sociopolitical or sociocultural perspective that like us here in Austin recognizes that at the root of our problems as a community as a whole are not an accumulated sum total of deficiencies that we collectively inherit or "possess," but rather a very deep, history of educational neglect, underinvestment, and cultural chauvinism in an otherwise highly alienating, test-driven curriculum where the knowledge of the dominant group is what counts in our state curriculum.

And since knowledge, curriculum, and whose knowledge counts in society entails the reproduction of our commuities' social and political consciousness, our battle lies not in "fixing" Latina/Mexican moms, but rather in other areas as follows to name only a few problem areas:

The legendary battles for inclusion of all subaltern histories involving the Texas State Board of Education is what also might come readily to mind in this regard. And though folks around the nation scoff at these goings on here in Texas, they have enormous consequences not only for Texas, but nationally, as well.  Why? Because Texas itself controls 10% of the school text book market and when it comes to purchasing text books for schools, other states take their lead from Texas.

When I think of this very significant, growing, and historic fight that we as a community have taken on—not just in Austin, but in Texas and throughout the nation—it troubles me that a single study devoid of this context or historical understanding could be used by policy makers to construct our Latina/Mexican mothers as "the problem" in need of fixing.

Education is never not a political issue for our communities. If you are a young or older Latin@, Mexican@, or Tejan@, you must understand that you need to get civically engaged in order for us to turn this circumstance around for our communities. You must vote, get out the vote, get naturalized and earn citizenship so that you can vote and get out the vote.  You should connect to our community's civil rights groups and organizations like LULAC and consider running for office.

Form your own LULAC council and get out and testify on these things in your school boards, state board, and legislatures. Form partnerships like what we are doing here in Austin so that you can develop curriculum that speaks authentically to your children's and community's experiences so that you can (re)discover the importance of your own histories.  In short, organize!  Sí se puede! Yes we can! 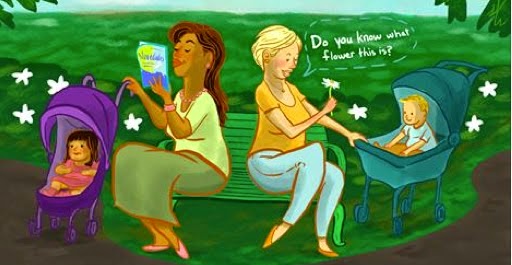 Listen to the Story

All Things Considered
3 min 4 sec
Mexican-American toddlers born in the U.S. do not develop nearly as fast as white toddlers when it comes to language and pre-literacy skills. That's the main finding of a new study by the Institute of Human Development at the University of California, Berkeley.

The study followed 4,550 Mexican-American children from birth to 30 months of age. At 9 months, these infants recognized words and gestures and had no trouble manipulating objects such as rattles and simple toys. But by age 2, their vocabulary, the number of words they knew and their overall pre-literacy skills lagged way behind. Four out of five Mexican-American toddlers displayed a slower rate of growth than that of their white peers.

Researchers say one reason is that Latino parents do not invite their children to speak at an early age. Bruce Fuller, co-author of the study, says that does not mean Mexican-American parents are less nurturing or caring.

"But what the new findings show," says Fuller, "is that a lot of that warm parenting is not necessarily infused with rich language, with questioning kids, with giving kids cognitive challenges."

So by age 2 1/2, the gap between Mexican-Americans and whites is significant — as much as five months. Children whose mothers are foreign-born fall the farthest behind. Only 28 percent of these mothers said they read to their child daily, compared with 59 percent of white mothers.

According to the study, white mothers are more likely to work on their kids' pre-literacy skills earlier, at around age 2. Mexican-American moms tend to wait until their child reaches kindergarten age, 4 to 5 years old. This raises sensitive questions about parenting especially among poor, foreign-born parents.

"It's certainly not a function simply of material poverty, but I think it is a weakness of parenting in the U.S. context," Fuller says.

"In school kids are rewarded to process symbols and mathematical tasks pretty quickly. So it's in the U.S. context and school context that [Latino] parenting practices are not up to snuff."

"It's not necessarily that they don't know how to parent," says Selma Caal, a researcher for Child Trends, a nonprofit with a focus on Latino children and families. She says there are two key factors in the development of toddlers: family income and the education of the mother.

"If the mother is working as well as the father, they will be more likely to provide the sorts of things children may need," says Caal.

"Mothers working outside the home are exposed to more middle-class forms of parenting," Fuller says. "They're talking with fellow workers about how they question their kids, how they introduce kids to educational TV and digital media."

He says it's the kind of exposure that helps assimilation and leads to innovative parenting.
The full study appears in the Hispanic Journal of Behavioral Sciences.

Posted by Angela Valenzuela at 7:05 AM