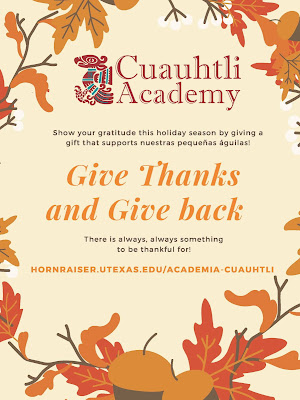 We at Academia Cuauhtli in Austin, Texas, take this opportunity to thank our many friends, students, colleagues, and teachers who have supported the parents, children, educators, volunteers, donors, and advocates of our Saturday school over the years.


Show your gratitude this holiday season by giving a gift that supports our school.

Our mission is to honor our community's cultural heritage, foster social justice consciousness, and reclaim our identities in pursuit of educational freedom. Your donation will help us pay for food, Danza dresses, field trips, and classroom material.

Our fundraiser ends on December 6th, so please click here to make your tax-deductible donation now.

Thanks, everybody, for your continued support and friendship. It does take a village.

What a blockbuster week this was.  A highlight was a presentation on Friday afternoon, November 22, 2019 of the Independent Equity Committee (IEC) by its authors, all full professors at the University of Texas at Austin, to legislators and their staff at the Texas State Capitol.  This is the same IEC report that I've posted on previously.  Pictured here is History Professor and Committee Chair Dr. Alberto Martinez (second from right) and the remaining seven IEC members:

This convening was historic in more ways than one, including bringing together the authors and luminary faculty to bear witness to the uncontested findings of the report, but also to bring us all into a room at the capitol itself.  Others present (not shown) included myself, Dr. Maggie Rivas-Rodriguez, Dr. Victor Saenz, and Professor Emeritus Dr. Mercedes de Uriarte.  Dr. Karma Chavez was among the associate professors present.

The IEC report got coverage by CBS Austin/KEYE News, as well, as you can see below.  Click to link to view the video and a few graphics from the report.

UT Provost Maurie McInnis' response, as noted below, is encouraging.

All of this is very inspiring, to say the least.  Many thanks to our community, in particular, for being present.

AUSTIN, Texas (KEYE) -- Hispanic professors at the University of Texas at Austin are on the offensive asking for equal pay and equal opportunities.
The professors say they have many examples of how Hispanics are underpaid and underutilized.
Friday afternoon at the state capitol eight full time professors presented the Hispanic Equity Report. They say it illustrates serious inequities at UT in terms of pay, leadership, recruitment and retention.
The salary study by race or ethnicity of all employees at UT shows Hispanics had the lowest median salary in 2017 at $42,000 and again in 2019 at $47,000.
One specific example the report shows is that Hispanic full professors make an average of $25,000 a year less than their white counterparts. And they say that’s just the beginning of the disparities.
Hispanics who get rejected from tenure at UT often have longer resumes than white professors who do get accepted for tenure.
The committee of eight professors is asking UT to invest $2.3 million each year to achieve better equity in compensation. They also want UT to appoint more Hispanics to positions of departmental and university leadership.
UT released the following statement:

Over the past year, the university has been working to address many of the issues of faculty equity echoed by this independent report. Executive Vice President and Provost Maurie McInnis has committed the university to understanding the source of the disparity in salaries described in the report. The provost has also asked the deans to review and report about their processes and outcomes in leadership selection, to improve transparency into these processes and to consider equity in the selection of leaders. As the provost wrote the authors of the report, “We are focused on taking real action, action that will lead to sustained change, and that requires real care and a deliberate approach.”

There is more detail on UT’s faculty equity initiatives online at https://provost.utexas.edu/news/update-faculty-equity-initiatives.

Posted by Angela Valenzuela at 3:48 PM No comments:

It pleases me beyond measure to share with you my statement on the legendary, first-published Chicana feminist, independent scholar and archivist, Martha P. Cotera.  In a beautiful ceremony on Wednesday of this past week, Consul General of Mexico Pablo Marentes accorded her the Ohtli Award which is the highest award given to those who have dedicated the greater part of their lives opening pathways to people of Mexican origin.

If you want to get a glimpse at what will undoubtedly go down in history as a classic statement on being a Chingona—which Martha undoubtedly is—you'll want to link to this blog post titled, "Are you a Chingona?  Check out this video to see if you are!"  And then view this video, "FemBeat: Chingonas," where Martha explains the term better than anyone ever has.

In a moment of reflection in my class this week on the difficult times that racialized and minoritized peoples experience in a world of white supremacy, I asked them about their onus and responsibility to such things in life and career.

I didn't say this, but should have: Martha exhibits that what must be done if we are to make a positive difference in others' lives and how doing so, equates to a life lived abundantly.

Felicidades, Martha!  Congratulations!  Thank you for being you.  The world is a much better place because of you. 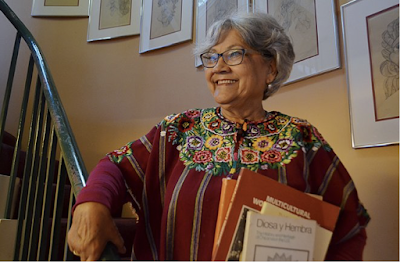 
Martha is also a Chicana feminist icon to generations of Chicana activists and scholars in the United States. Since the 1960s, she and Juan were active in the Chicano movement; Martha focusing on recruiting and developing women, and in documenting their  role within the movement. She is best known for her books, Diosa y Hembra, and Chicana Feminist, the first and best histories of Mexican American women.  Her writings also include more than 10 other books, and hundreds of essays and articles on civil rights, feminism, and on Mexican and Mexican American history and bibliography.
In Austin, Martha has been involved in founding the most important women’s organizations. As  the founder  and first president  of the Mexican American Business and Professional Women of Austin, under her leadership, the organization established MAP (Medical Assistance Program) in Austin, the state’s first city/county wide public health program for the uninsured, also the Center for Battered Women and the Rape Crisis Center (now SAFEPLACE), and led in establishing the Austin Commission for the Status of Women.  She is also a local founder of the Austin Women’s Political Caucus, the Hispanic Women’s Network of Texas, the Latina PAC, Latinas en Acción, and Women for Good Government.  Martha has worked on successful political campaigns which elected the first Latinas to political office in Austin, including Amalia Rodriguez Mendoza, District Clerk, Margaret Gomez, Travis County Commissioner, Dolores Ortega, Travis County Treasurer,  Lena Guerrero, State Representative, Gina Hinojosa, State Representative, and Delia Garza, City Councilwoman.
In the cultural arts Martha has provided similar leadership, especially since 1974, working on building the multi-million dollar Mexican American Cultural Center, one of the few in the nation.  She is also a founding member and currently active in Nuestro Grupo, which instituted Academia Cuauhtli, a language and cultural arts academy held in the Center, which successfully participated in establishing Ethnic Studies in Texas. She has similarly supported academic programs at UT as founding member of the Center for Mexican American Studies in 1972 and the Department of Mexican American and Latino Studies, and has served for the past 50 years in oversight committees to ensure equity for Mexican Americans and other Hispanics at UT; unfortunately, even with decades of advocacy and service with the Austin Independent School District, equity in the district, as in UT, is still out of reach.

Martha believes that the women and men in the Hispanic community are Austin’s richest asset, and  that their skills, cultural heritage, values and hard work will help the community prevail and lead this city, state and country. To advance this goal, Martha has collaborated with the Consulado and with others to pass resolutions and ordinances like the Sanctuary City, the MBE/WBE and Fair Housing, Bed Tax Ordinance, and Bond issues for our arts institutions because she believes that it is only just, that all who pay taxes in Austin, should all benefit from our tax dollars.  She is a tireless champion of our vulnerable communities and is never afraid to speak or take action.   She is not all MACRO, she is also a MICRO activist, devoting hours daily helping immigrants navigate the system to legalize their status and to reunite with their families. Esa Martha es toda una OHTLI, abre caminos, si no se puede con cuidadito, y esmero, pues los abre por que los abre, a fuerza de bulldozer.
Martha Cotera es una fuerza de la naturaleza, de acciones heroicas. Ella cosecha energía del sol y la luna porque está ocupada día y noche, luchando a favor de la causa de la justicia social de manera grande y pequeña. Una vez, después de ayudar a resolver un problema muy grande y difícil, me sentí tan aliviada que expresé mi sentido de gratitud y admiración haciendo referencia al Gandalf, desafiante de la edad, del Señor de los Anillos en un texto, diciendo: "Martha, ¡Gracias!
Tú eres Gandalf, el gran mago, que ha venido a la Tierra Media para mejorar la vida de todos.  Como Gandalf, Su espíritu es cálido y enérgico.  Su intelecto y discurso son agudos, dando voz a los que no tienen voz. Una verdadera Chingona!  Y mas que todo, mi amiga linda y querida.  Gracias por ser quien eres.  Emilio y yo y todos de la comunidad, Nuestro Grupo, Academia Cuauhtli, te admiramos en abundancia. Gracias por la alegría y la plenitud que traes a nuestras vidas.
Translation: Martha is a force of nature, of heroic stock.  She harvests energy from the sun and moon because she's busy day and night, fighting the cause for social justice in ways big and small.  Once, after helping to solve a very big and difficult problem, I felt so relieved that I conveyed my sense of gratitude and admiration by referencing the age-defying Gandalf from the Lord of the Rings in a text, saying, "Martha, thank you!  You're Gandalf, the great wizard, who has come to Middle Earth to make life better for all.  Her intellect and speech are sharp, giving voice to the voiceless.  A true Chingona!  And most of all, my dear friend and beloved friend. Thank you for being who you are. Emilio and I and all of the community, Nuestro Grupo, Academia Cuauhtli, admire you in abundance. Thank you for the joy and fulfillment you bring to our lives!
Posted by Angela Valenzuela at 10:48 AM 2 comments: