Extinction Rebellion Is Creating a New Narrative of the Climate Crisis

This thoughtful article by Charlotte Du Cann merits a close read.  Aside from the looming ecological crisis that impels, it says so much about social movements, their expressions, meanings, and most importantly, the chemistry that makes them effective.

What I see here is an awakening of consciousness not solely reached by an awareness of the havoc created by "civilization," but specifically, by the ravages of Western civilization that results in neoliberal, extractive, imperialist, and colonizing ways of knowing belied by "its glamorous surface."

In other quarters, as the alt-right chants and rallies around their exaggerated sense of whiteness, "You will not replace us," they perpetuate a narrow, arrogant, civilizational myth that crowds out thought, and thusly, the capacity to self preserve with what should be a real concern with ecological collapse in this very moment that we teeter on the brink of our own extinction as a species. Plus, the real challenge is not to splinter out but to work together with institutions, organizations, NGOs, nonprofits, states, and policies across the planet to reduce, and ultimately eliminate, our carbon footprint.

Regardless of our political or ideological stripes, we all need to read David Wallace-Wells' “The Uninhabitable Earth” and educate ourselves about the climate emergency that we're currently in.


Extinction Rebellion Is Creating a New Narrative of the Climate Crisis

In London, activists are taking to the streets to eschew hopelessness in favor of repair.
By Charlotte Du Cann
Ms. Du Cann is an editor at the Dark Mountain Project. 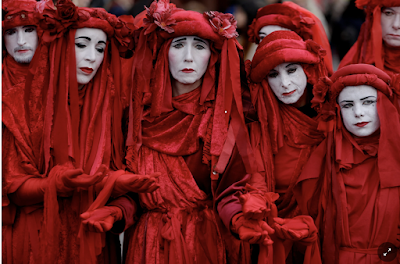 Extinction Rebellion protesters blocking traffic on Whitehall at the bottom of Trafalgar Square, during a rally in London earlier this month.Credit...Matt Dunham/Associated Press


Posted by Angela Valenzuela at 4:04 PM