More than 11,000 scientists from around the world declare a ‘climate emergency’

By all credible, scientific accounts, we as humanity are in the throes of a "climate emergency," an epic, existential drama, as David Wallace-Wells and now, these 11,000 scientists maintain.  This warning may change the very language we accord to climate change, elevating the crisis to the level of an "emergency."

I encourage you to listen to DAVID WALLACE-WELLS: THE UNINHABITABLE EARTH
speak on his 2017 New York Magazine article that shocked the world and that is the magazine's most-downloaded piece today titled, “The Uninhabitable Earth.” This article is now a widely-read, top-selling book should you want the longer version.

The challenges to substantively addressing climate change are substantive, including this task:


On energy, the report calls for the world to “implement massive energy efficiency and conservation practices” and cut out fossil fuels in favor of renewable sources of energy, a trend it notes is not happening fast enough. It also calls for remaining fossil fuels, such as coal and oil, to remain in the ground, never to be burned to generate energy, a key goal for many climate activists.

Time is of the essence.  We can do this, but we must all act now, in ways big and small, including educating ourselves and educating others on climate change and what we can do about it.

More than 11,000 scientists from around the world declare a ‘climate emergency’
Study outlines six major steps that ‘must’ be taken to address the situation. 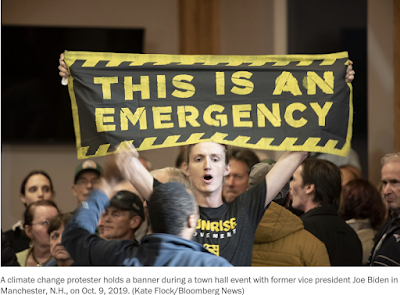 A new report by 11,258 scientists in 153 countries from a broad range of disciplines warns that the planet “clearly and unequivocally faces a climate emergency,” and provides six broad policy goals that must be met to address it.

The analysis is a stark departure from recent scientific assessments of global warming, such as those of the U.N. Intergovernmental Panel on Climate Change, in that it does not couch its conclusions in the language of uncertainties, and it does prescribe policies.
The study, called the “World scientists’ warning of a climate emergency,” marks the first time a large group of scientists has formally come out in favor of labeling climate change an “emergency,” which the study notes is caused by many human trends that are together increasing greenhouse gas emissions.

The report, published Tuesday in the journal Bioscience, was spearheaded by the ecologists Bill Ripple and Christopher Wolf of Oregon State University, along with William Moomaw, a Tufts University climate scientist, and researchers in Australia and South Africa.
The study clearly lays out the huge challenge of reducing emissions of greenhouse gases.

“Despite 40 years of global climate negotiations, with few exceptions, we have generally conducted business as usual and have largely failed to address this predicament,” the study states.

The paper bases its conclusions on a set of easy-to-understand indicators that show the human influence on climate, such as 40 years of greenhouse gas emissions, economic trends, population growth rates, per capita meat production, and global tree cover loss, as well as consequences, such as global temperature trends and ocean heat content. 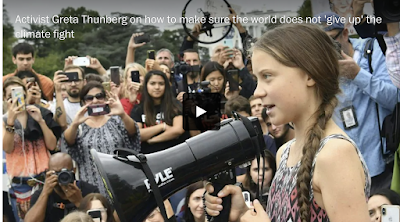 Activist Greta Thunberg on how to make sure the world does not 'give up' the climate fight
After taking a solar-powered boat from England to New York to attend the United Nations Climate Action Summit, Thunberg discussed what activists need to do. (Jhaan Elker/The Washington Post)

The results are charts that are, at least compared with the climate graphics presented by the IPCC, surprisingly simple, and that help reveal the troubling direction the world is headed.

The study also departs from other major climate assessments in that it directly addresses the politically sensitive subject of population growth. The study notes that the global decline in fertility rates has “substantially slowed” during the past 20 years, and calls for “bold and drastic” changes in economic growth and population policies to cut greenhouse gas emissions. Such measures would include policies that strengthen human rights, especially for women and girls, and make family-planning services “available to all people,” the paper says.

On energy, the report calls for the world to “implement massive energy efficiency and conservation practices” and cut out fossil fuels in favor of renewable sources of energy, a trend it notes is not happening fast enough. It also calls for remaining fossil fuels, such as coal and oil, to remain in the ground, never to be burned to generate energy, a key goal for many climate activists.

A handout aerial photo made available by the Mato Grosso state government shows an area of forest burning in the Pantanal, Brazil, Oct. 31, 2019. (Chico Ribeiro/EPA-EFE/Shutterstock)


Maria Abate, a signatory of the scientists’ warning and a biology professor at Simmons College in Boston, says she hopes the paper will raise awareness. “Like other organisms we are not adapted to recognize far-reaching environmental threats beyond our immediate surroundings,” she said via email. “The reported vital signs of our global activity and climate responses give us a tangible, evidence-based report card that I hope will help our culture to develop a broader awareness more quickly to slow this climate crisis.”

Other items on the study’s list of policy priorities include quickly cutting emissions of short-lived climate pollutants, such as soot and methane, which could slow short-term warming. The study also calls for a shift to eating mostly plant-based foods and instituting agricultural practices that increase the amount of carbon the soil absorbs. On the economy, the study states that improving long-term sustainability and reducing inequality should be prioritized over growing wealth, as measured using gross domestic product. The authors also advocate for policies that would curtail biodiversity loss and the destruction of forests, and they recommend prioritizing the preservation of intact forests that store carbon along with other lands that can rapidly bury carbon, thereby reducing global warming.
“This is a document that establishes a clear record of the broad consensus among most scientists active at this point in history that the climate crisis is real, and is a major, even existential, threat to human societies, human well-being, and biodiversity,” said Jesse Bellemare, an associate professor of biology at Smith College who is a signatory of the study’s emergency declaration.

He said via email that the presence of so many biologists and ecologists on the list of signatories may reflect the fact that they are observing so many changes from an amount of climate change much smaller than what is projected for the future.

Ripple, of Oregon State, is no stranger to organizing scientific calls to action, having founded the Alliance of World Scientists and organized scientists’ “Warning to Humanity: A Second Notice” in 2017, which was also published in Bioscience and focused on the urgent need to solve a broad array of environmental problems including climate change and biodiversity loss.

Thousands of scientists issue bleak ‘second notice’ to humanity
“We’re asking for a transformative change for humanity,” Ripple said in an interview. Many of the signatories to the warning do not list themselves as climate scientists but, instead, as biologists, ecologists and other science specialists. Ripple says that is intentional, as the authors sought to assemble the broadest support possible.

“The situation we’re in today with climate change,” he says, “shows that this is an issue that needs to move beyond climate scientists only.”

Moomaw says the paper comes from researchers who are seeing the consequences of a rapidly changing planet, and is in part “a statement of frustration on the part of many in the scientific community.”

“Scientists, and in particular those that are studying what is happening in a changed climate, have become the most alarmed at how rapidly these changes are taking place and the urgency of needing to take far more drastic action,” Moomaw said.

The term “climate emergency” has been championed by climate activists and pro-climate action politicians seeking to add a sense of urgency to the way we respond to what is a long-term problem. The Climate Mobilization, an advocacy group, is seeking to have governments in the United States and elsewhere declare a climate emergency and enact response measures commensurate with such a declaration.

New York’s City Council has declared a climate emergency, as has San Francisco. European cities have also taken this step. Bills labeling global warming as an emergency are pending in both the House and the Senate, endorsed by prominent liberals including Sen. Bernie Sanders (I-Vt.) and Rep. Alexandria Ocasio-Cortez (D-N.Y.).

The youth climate movement, including Swedish activist Greta Thunberg, has been leading the charge to ratchet up the language used in describing global warming.

To date, scientists have been reluctant to use such language. However, this study may change that.

Phil Duffy, a climate researcher and president of the Woods Hole Research Center, who added his name to the paper Monday, said he finds the term fitting, considering the scale of the problem and lack of action so far.

“The term ‘climate emergency’ … I must say, I find it refreshing, really, because you know, I get so impatient with the scientists who just are always just waffling and mumbling about uncertainty, blah, blah, blah, and this certainly is, you know, is much bolder than that,” he said. “I think it’s right to do that.”


Posted by Angela Valenzuela at 8:40 AM