'You Promised You Wouldn’t Kill Me' Atatiana Jefferson, Natasha McKenna and the other black women we forget.

Do read this poignant, anguishing piece written by the renowned Dr. Kimberlé Crenshaw, a black feminist legal theorist and scholar, on the killing of Black women by police.

Sadly and tragically, and unlike their male counterparts who die at the hands of police violence in disproportionate numbers, their names are too soon forgotten. According to data released by the Fatal Interactions with Police research project, disproportionality is true for Black women, too:

While we desperately need to end to such rogue police violence, let's not also commit symbolic violence by invisibilizing their victims.


'You Promised You Wouldn’t Kill Me'

Atatiana Jefferson, Natasha McKenna and the

other black women we forget. 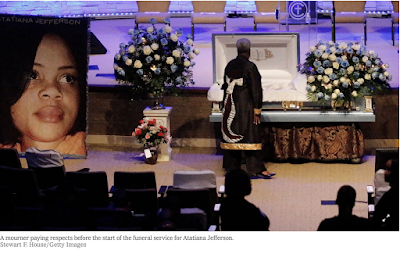 By Kimberlé Crenshaw
| Oct. 28, 2019
Dallas—On Thursday, I went to the funeral of Atatiana Jefferson, 28, who was shot to death by a police officer from outside her bedroom window this month. My companion there was Rhanda Dormeus, whose daughter Korryn Gaines was also killed by the police in her home. As we watched people file by the coffin, we thought, “This can’t keep happening.”
Ms. Jefferson was killed after a neighbor noticed her doors were open in the early hours of the morning and called a nonemergency police line for help. The two officers who responded did not announce themselves as the police as they sneaked around the yard and peeked into the house.
The death of Ms. Jefferson has mobilized activists, community members and commentators to demand sweeping changes. But if history is any guide, the masses will not recognize her name, as they do Eric Garner, Michael Brown or Tamir Rice. It’s not that we lack stories of black women killed by the police; rather, it seems that we don’t know what to do with them.
Consider Natasha McKenna, who died in early 2015 days after six sheriff’s deputies in Fairfax County, Va., shackled her outside her jail cell, wrestled her to the ground and then shocked her with a stun gun over and over. “You promised you wouldn’t kill me,” she pleaded. Those words should have become a rallying cry. Instead, most people have never heard them.

The families of these women often suffer in relative obscurity. Their daughters’ deaths don’t elicit the marches or news coverage that could catalyze accountability. When most people think about anti-black violence, like lynchings or police killings, they think about men. Women rarely come to mind first. That’s why I created the #SayHerName hashtag to counter this tendency.
It’s true that more men of all races are killed by the police than are women. But black women make up less than 10 percent of the population and 33 percent of all women killed by the police. Data released by the Fatal Interactions with Police research project indicates that from May 2013 to January 2015, more than 57 percent of black women were unarmed when killed. And they are “the only race-gender group to have a majority of its members killed while unarmed.”
They are killed in many of the same circumstances as men, but critically, their being female does not inoculate them from the rapid escalation — often fueled by race-based fear — that often happens. Police officers with eager trigger fingers don’t care if a woman’s child is next to her, or India Kager and Korryn Gaines might still be with us, or if a child might die during a police raid, as Aiyana Stanley-Jones’s tragic death illustrates. Being elderly, homeless or mentally incapacitated does not seem to give police officers pause, as the losses of Kathryn Johnston, Margaret LaVerne Mitchell and Pearlie Golden reveal. Neither does being in one’s own home, or Michelle Cusseaux and Kayla Moore’s lives might have been spared.
The silence around black women is not simply a matter of indifference. It happens even in spaces created for them. When I and a group of bereaved mothers who lost daughters went to the 2017 Women’s March, only mothers of men killed by the police were invited on stage. I still remember the devastated looks on their faces when they realized their losses would remain obscured.
If we want to get a broader sense of the problem here, we have to be able to critique both race and gender conventions and stereotypes, and usually class, too. We must consider implicit and explicit biases against black women. Their interactions with the police may be different from those of white women and, in some ways, black men as well.

All black people would be safer with police reforms that reduce their interactions with law enforcement in public and at home. Black women are more likely than black men to engage with police officers when they knock on doors making welfare or mental health checks. These seemingly benign nonemergency calls can put them at risk.

In 2017, Texas enacted the Sandra Bland Act, named for a woman who died. A key provision is mandatory de-escalation training for police officers. But it’s unclear whether the officer who killed Atatiana Jefferson underwent such training; his behavior on the night of her death suggests that neither he nor his partner followed police protocol.

So simply altering police training won’t protect black women. We must create penalties and disincentives around the use of excessive force. It’s a damning indictment of a broken system that the Sandra Bland Act, which ostensibly sought to prevent future deaths, didn’t seem to have any impact in Ms. Jefferson’s case.

Ms. Jefferson’s mother was too sick to attend her daughter’s funeral. In a letter that was read aloud, she wrote, “You often said you were going to change the world.” If her senseless killing catalyzes reforms that ensure policing is about protection and service, rather than fear and punishment, then she will have changed the world.
#SayHerName
Posted by Angela Valenzuela at 2:48 PM