It give me great pleasure to announce the Spring 2019 Issue of the Texas Ed Review-VOLUME 7, ISSUE 2 [download entire issue here].  Scroll down for the Table of Contents.  Kudos to co-managing editors, Chelseaia Charran and Chloe Sikes on the great job that they did with this issue.

The Texas Education Review is an independent, peer reviewed, student-run scholarly publication based at the College of Education at The University of Texas at Austin.


From Sweatt v. Painter and No Child Left Behind, to charter schools, curriculum policy, and textbook adoption, the State of Texas has played and will continue to play a critical role in shaping education policy in the United States.
The Texas Education Review (TxEd) is located directly on The University of Texas’s campus in the heart of downtown Austin.  Its close proximity to the Texas Capitol, Texas Education Agency, and State Board of Education offers unparalleled access to the thought leaders, policy makers, and academics who are driving education policy in Texas.
TxEd focuses on analysis of education policy and related issues, with non-exclusive preference given to issues affecting the State of Texas.
TxEd was founded and is operated by PhD students at The University of Texas at Austin’s College of Education, which consistently ranks as one of the best public university graduate education programs in the U.S.
For information regarding TxEd, please contact our Co-Managing Editors, Chelseaia Charran (ccharran13@utexas.edu) and Chloe Latham Sikes (sikesc@utexas.edu)
@utexascoe
TABLE OF CONTENTS

Posted by Angela Valenzuela at 4:48 PM No comments:

Does it get any sadder than this?  Carlos Gregorio Hernández Vásquez had parents, family, community and plans for a good life.  Then to die alone in a U.S. border facility is a distressing ending for such a young life.  He is the fifth child to die in U.S. custody.

This has to change, my friends.  We must all work to change this.  Let's get this president out of office as his policies and practices are killing these children, our children.  And let's start by turning up the temperature in their otherwise freezing cells that are making them sick. 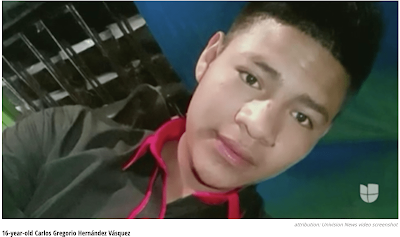 Sixteen-year-old Carlos Gregorio Hernández Vásquez died next to a toilet, alone, in an immigration detention cell. In video reviewed as part of his autopsy, Texas Monthlyreports, the boy “is seen lying on the floor, vomiting on the floor, and walks over to the commode, where he sits and later lies back and expires.” His May death makes him the fifth child to die after being taken into U.S. custody since December.
Carlos crossed the border on May 13 and had been detained at the Rio Grande Valley Sector's Central Processing Center for nearly a week—in violation of the 72-hour limit imposed by law—when he began to feel sick. ”That day, a nurse practitioner found that he had a 103-degree fever, and he tested positive for the flu. He was prescribed Tamiflu and transferred to the Border Patrol station at Weslaco. Hernandez died the next morning,” when he was found by officers.
His autopsy concluded that he “succumbed to the flu, complicated by pneumonia and sepsis, on or near the toilet of his South Texas Border Patrol cell.” Texas Monthly notes that Border Patrol apparently never made an effort to hospitalize the boy when he became sick, in fact moving him to Weslaco even though a bed had reportedly been designated for him by the Office of Refugee Resettlement, where kids are supposed to be transferred from Border Patrol custody.
The deaths of migrant children after being taken into U.S. custody have been unprecedented, because “before December, no child had died in Border Patrol custody in a decade.” Seven-year-old Jakelin Ameí Rosmery Caal Maquin’s autopsy found that she died of streptococcal sepsis in December. That same month, 8-year-old Felipe Gómez Alonzo died of the flu and “a rapid, progressive infection that led to organ failure,” his autopsy report said.
In May, Wilmer Josue Ramirez Vasquez had been held in Border Patrol custody for several days but became so sick he had to be hospitalized, Daily Kos’ Laura Clawson wrote at the time, eventually dying in the hospital from “multiple intestinal and respiratory infectious diseases.” According to an El Paso County medical examiner’s office report, Wilmer had influenza, parasites, and E. coli bacteria. He was just two and a half years old.
But migrant children have also died outside of Border Patrol custody. In April, 16-year-old Juan de León Gutiérrez became sick while in ORR custody after crossing to the U.S. alone. He “was treated for several days at a Corpus Christi hospital before he died,” Texas Monthly said. “The Nueces County medical examiner said no autopsy was performed because Gutierrez was not in custody at the time of his death and died of natural causes.”
Ten-year-old Darlyn Cristabel Cordova-Valle died while in ORR custody, with an official from the Department of Health and Human Services, which oversees the ORR, claiming “that the girl had a history of congenital heart defects,” and that, "following a surgical procedure, complications left the child in a comatose state.” But the Trump administration failed to publicly disclose her death for eight months, reporting her Sept. 29 death only after Carlos and Wilmer’s deaths.
Children have also died after going into Immigration and Customs Enforcement custody. Last May, nearly 2-year-old Mariee Juárez died in a hospital, several weeks after becoming sick in the agency’s custody at the South Texas Family Residential Center, a migrant family jail in Texas. In testimony to Congress this month, her mom Yazmin said she watched Mariee become “limp and hot,” with ICE releasing them only after the child’s condition had deteriorated.
“A veteran forensic pathologist who reviewed Hernandez’s autopsy,” Texas Monthly continued, “as well as the three other autopsies available for migrant children who died in custody, said she was alarmed at the conditions the children were kept in.” Dr. Judy Melinek said, “In my opinion, there needs to be a public health audit of the policies and conditions in these migrant camps and a forensic review of all migrant deaths.”


These children came to the U.S. for safety and new lives—some coming here all by themselves—and our nation failed to provide them safety, dignity, or compassion. The conditions in places similar to where they were jailed have not improved, with kids saying they’re still going hungry, still being abused by officers, and still shivering in freezing cells, meaning that more kids may lose their lives. Remember Carlos. Remember Jakelin. Remember Felipe. Remember Wilmer. Remember Juan. Remember Darlyn. Remember Mariee.

Posted by Angela Valenzuela at 6:11 PM No comments:

Asylum, Terror, and the Future #5 from military officer to drug lord Based on case stories of Jennifer Harbury

Powerful reporting by Anne Lewis, on the Rag Blog. This is a difficult video to watch because of the sense of terror that it incites. The horror that these Central American families are being put through is beyond measure.

She interviews renowned lawyer and human rights activist, Jennifer Harbury, provides a credible analysis of how we've gotten to where we are that has resulted in the migration of so many from Central America to our southern U.S.-Mexico border.

Asylum, Terror, and the Future #5 from military officer to drug lord Based on case stories of Jennifer Harbury

By Anne Lewis | The Rag Blog | July 27, 2019
When people say that the current removals of workers and families, use of military force, concentration camps, denial of entrance for refugees, snatching of children from the arms of their mothers and fathers are new under the Trump Administration, they have little understanding of our history. It’s easy to find examples of all of these — based in the pervasive belief that white America is racially, ethically, and politically superior to other nations and peoples, both within our national boundaries and without.
This podcast explores with Jennifer Harbury why it is that so many refugees flee from Central America even though they know full well the danger of the journey with kidnapping, rape, and physical torment, and the potential for torture, imprisonment, and deportation across our border.
Documented CIA involvement in the countries of the Northern Triangle began in Guatemala in 1954 under President Eisenhower and continued through a UN-brokered peace in 1996. In the 1980s the Reagan Administration stationed thousands of U.S. troops to train right-wing rebels in Honduras. In El Salvador, the U.S. -trained and funded Atlacatl Battalion killed as many as 1,000 men, women, and children in a village, and the Reagan Administration under a Cold War containment policy ran a war in Guatemala that resulted in an estimated 150,000 civilian deaths, 85% committed by U.S. trained death squads.

For a century, the U.S. government has intervened on behalf of the United Fruit Company, coffee companies, mining companies, and right-wing dictators against efforts towards self-emancipation and liberation of the mainly indigenous population. The idea of Manifest Destiny (that the U.S. under God should spread democracy and capitalism across the continent) followed by Theodore Roosevelt’s 1904 declaration that we are “the international police power” in Latin America, has provided a morally equivocal basis.
Why should we feel responsible for refugees with asylum claims from the Northern Triangle of Central American numbering in the hundreds of thousands?
Tamal refugee to Britain, A. Sivanandan, expressed this simply and well. “We are here because you were there.”
If we look towards the future, liberal ideas of inclusion and shared humanity, while ethical and correct, will not move us very far against the current administration. Economic programs like the new Marshall plan proposed by Julian Castro, although well intended, seems like a misunderstanding of post-World War II Western Europe and current conditions in the Northern Triangle. Add to that real skepticism about how much the U.S. should intervene in the economies of other nations and how much we can and will do to improve conditions for working people in those nations.

Instead we could look towards solutions like the priest from Columbia during the Medellín cartel era who proposed legalizing narcotics, all narcotics; or efforts to transform trade deals like CAFTA into something that benefits agricultural workers in their home countries by setting international wage, benefit, and environmental standards; or support for international labor unions; or support for indigenous movements towards liberation and worker control; or even a true pledge that the U.S. military will not be involved in any capacity providing guns and money and training torturers and murderers — shut down the School of the Americas/WHINSEC this November in honor of the 30th Anniversary of the Central American University massacre.
The list of solutions could go on and on based on principles of self-determination, self-empowerment, and international law.
Jennifer Harbury is a lawyer and human rights activist.
[Anne Lewis is a documentary filmmaker whose films include On Our Own Land (DuPont-Columbia award), Fast Food Women (POV), Justice in the Coalfields (Gold Plaque, Intercom), and Morristown: in the air and sun about factory job loss and the rights of immigrants. Her latest film A Strike and an Uprising (in Texas) looks at the pecan shellers’ strike in San Antonio in the ’30s and the union uprising in Nacogdoches in the late ’80s (audience award, Hecho en Tejas, Cine Las Americas) She serves on the executive board of the Texas State Employees Union TSEU-CWA 6186 and teaches at the University of Texas at Austin.]

Posted by Angela Valenzuela at 1:43 PM No comments: