This is a bit belated, but it gives me great pleasure to announce that this pathbreaking volume, co-edited by Deborah Vargas, Nancy Raquel Mirabal, and Lawrence LaFountain-Stokes titled, Keywords for Latina/o Studies (NYU Press, 2017), won a 2018 Choice Award.  Very few anthologies ever win this award, making this a particularly praiseworthy volume.  Personally, I have found it extremely useful in my own thinking these days about Latinidad and how its evolving. 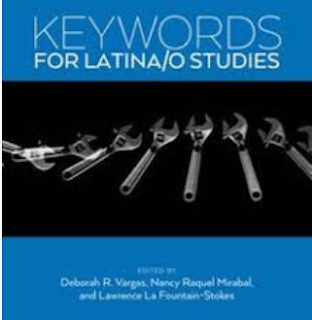 The chapter I contributed is titled, "Education," and is in the company of outstanding scholars with equally outstanding contributions across many areas, including the following: "Afro-Latinas/os," by Tanya Katerí Hernandez; "Borderlands," by Nicole Guidotti-Hernández; "Chicana, Chicano, Chican@, Chicanx," by Sheila Marie Contreras; "Culture," by Arlene Dávila; "Decolonial," by María Lugones; "Family," by Richard T. Rogríguez; "Feminisms," by María E. Cotera; "Gender," by Sandra K. Soto; "Health," by John McKiernan-Gonzalez; "History," by Gerald E. Poyo, "Hyphen," by Frederick Luis Aldama; "Illegality," by Cecilia Menjivar; "Indigeneity," by Maylei Blackwell; "Mestizaje by Alicia Arrizón; "Modernity," by José F. Aranda, Jr.; "Nationalism," by Raúl Coronado; "Politics," by John A. García, "Poverty," by Patricia Zavelle; "Spanglish," by Ana-Celia Zentella; "Spirituality," by Theresa Delgadillo,  "Television," by Mary Beltran; "White," by Julie Dowling and so many others—amounting to a prodigious total of 63 individual contributions.

Below you can read the Choice Award Letter and helpful notes on classroom use.  I think that a lot of the pieces could be used not only in the college classroom, but also at the high school level where Mexican American Studies, Latino Studies, or Ethnic Studies, generally, is taught.  The pieces are all rather succinct and jam-packed with concepts and insights be great scholars who are of course, leading ones in their respective fields or subfields of study.

So much of this tracks back, as well, to great editors.  Check out their statement about building an "Archive of Meaning" below.  Again, many congratulations to Professors Vargas, Mirabal, and LaFountain-Stokes for their many months of hard work on the volume and for this much-merited recognition.

"This year’s Outstanding Academic Title list includes 455 books and digital resources chosen by the Choice editorial staff from among the over 4,800 titles reviewed by Choice during the past year. Of these, 436 are print products; the remaining 19 are electronic.

These outstanding works have been selected for their excellence in scholarship and presentation, the significance of their contribution to the field, and their value as an important— often the first—treatment of their subject. Constituting about nine percent of the titles reviewed by Choice during the past year, and two percent of the more than 21,000 titles submitted to Choice during this same period, Outstanding Academic Titles are truly the “best of the best.” As always, only a select group of publishers and authors are represented on such a list. Congratulations to you and your colleagues on this outstanding achievement."

NOTE ON CLASSROOM USE

BY LAWRENCE LA FOUNTAIN-STOKES, NANCY RAQUEL MIRABAL, DEBORAH R. VARGAS
Instructors who use Keywords for Latina/o Studies have employed it in multiple ways. Some use it to enhance required readings, others have structured assignments around individual keywords, and still others have used them to prompt discussions and complicate ideas.  Utilizing keywords to enrich readings is the most common tool.  They are often used to expand points and arguments. Terms such as “Borderlands,” “Citizenship,” “Latinidad,” “Mestizaje,” “Rasquachismo,” and “Raza,” and so forth, either directly correlate or are born out of the various fields that constitute Latina/o/x theories and methodologies. In this case, the different submissions assist in not only explaining the term, but also highlighting their epistemology and how they have influenced the field and beyond.  For instance, questions concerning citizenship and illegality cannot be divorced from a long, problematic, and violent history of Latina/o/x migration to the United States.  Terms like “Latinidad,” “Mestizaje,” “Rasquachismo,” and “Raza,” necessitate a deeper conversation concerning identity, art, and third-world political movements (i.e. Chicano Movement, Brown Berets).
By the same token, terms such as “Capitalism,” “Culture,” “Film,” “Food,” “Housing,” “Literature”and “Sexuality” have been written by scholars in the field of Latina/o/x Studies to illuminate how the field has reinterpreted these terms to not only include Latina/o/x, but to center them. Juana Maria Rodriguez’s rendering of sexuality is a perfect example. “The characterization of Latinx culture as sexually deviant and dangerous that emerged as a result of immigration, forced annexation, and colonial occupation have remained central to depictions of Latinx within popular culture” (197). Rodriguez’s succinctly connects sexuality with immigration, annexation and colonialism leading to a rich and deep conversations of links that are rarely made, but must be considered.
In regards to assignments, there are several innovative and exciting ways that keywords can be used in a classroom.
Such assignments allow students to use keywords as a departure for thinking through ideas, thoughts, and omissions.  It is an exciting strategy for getting them to not only analyze a particular keyword, but to put it to use. At the same time, it teaches students that keywords can change and evolve depending on the circumstances and conditions.
For these assignments to be successful, instructors needed to discuss the individual keywords in Keywords for Latina/o Studies thoroughly and unpack their various meanings. For instance, what makes certain keywords relevant to Latina/o/x Studies? This is particularly effective with keywords such as “Literature,” “Music,”“Philosophy,” and “Theater” where the connections to Latina/o/x theory and methodology is vague and not necessarily linked to the field of Latina/o/x Studies.  For other terms such as “Afro-Latina/os,”“Indigeneity,” “Sovereignty,” and “White,” expand, problematize, and challenge our understanding of Latinidad?
ARCHIVE OF MEANING
A central aim of Keywords for Latina/o Studies is to build an archive of meaning; one that is in continual dialogue with community. It is our goal to expand the understanding of this field and discipline, and to both complicate and make legible the myriad populations, histories, experiences, cultural expressions and intellectual thought that constitutes field and the Latina/o/x community.
Deborah Vargas
Nancy Raquel Mirabal
Lawrence LaFountain-Stokes
Posted by Angela Valenzuela at 8:36 AM