This should not even be a conversation about who is the "real racist" which is what Trump wants this to be. I think that we need to call out this evil, violent spirit that is in the atmosphere that we, all peoples of good faith and intention, do not have to accept. As covered by Kenneth Bernstein's ("TeacherKen") reflection on George Conway's conclusion that Trump is a racist president, it is abundantly appropriate to take this beyond censure, and call this out as a bad, evil spirit.

That this spills over into the realm of public policy is self-evident.  Here's how we go about this, if I may:

President Trump, if you are not racist, then let's get off this absurd merry-go-round, and let’s deal. And let's do so in a good spirit and with a good intention at a level that matches your rhetoric about your own non-racism.

Anything short of this is a testament to a bad intention.

Friends, we need to avoid falling into this premeditated discourse that threatens to consume the whole. No. I say let’s enact a good intention in all of our ways of knowing and being if we are to effectively counter this spirit in our own lives and dealings.

Not succumbing to evil inheres within each  and everyone of us, as well as calling out this bad spirit that seeks not to engage in constructive dialogue, but rather to dispirit and destroy.
And we of course know when we have a positive intention by the fruit that it bears.
We must continue to abide by Golden rule and treat others as we ourselves want to be treated.

Or as the Mayan precept dictates, In Lak'Ech!  You are my other me. 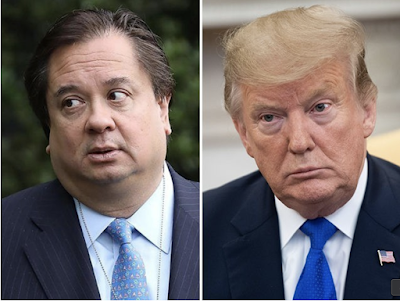 That is the title of this Washington Post op-ed, up now for tomorrow’s print edition.
Conway’s wife might now live in DC and work for the occupant of the Oval, but he is listed as a New York Lawyer and has been increasingly critical of the Donald, especially on Twitter, but increasingly in other venues as well.
Conway begins with an incident that involved his mother who had immigrated from the Philippines decades before the incident where, when he was three, he heard his mother told to go back from where she had come.
He explores his own wrestling with both the issues that those who had no connection with slavery  having negative reactions to some of the efforts to ameliorate the racism and discrimination that was a part of our history, and of the increasing evidence of Trump’s expressions of discrimination, xenophobia, and — yes — white supremacy and racism.
You really should read the entire piece.
The guts of this piece — and the gut punch it delivers — is found in the final four paragraphs, the first of which is this:
No, I thought, President Trump was boorish, dim-witted, inarticulate, incoherent, narcissistic and insensitive. He’s a pathetic bully but an equal-opportunity bully — in his uniquely crass and crude manner, he’ll attack anyone he thinks is critical of him. No matter how much I found him ultimately unfit, I still gave him the benefit of the doubt about being a racist. No matter how much I came to dislike him, I didn’t want to think that the president of the United States is a racial bigot.
That’s just the set-up.
So without further comment, here is the next:
But Sunday left no doubt. Naivete, resentment and outright racism, roiled in a toxic mix, have given us a racist president. Trump could have used vile slurs, including the vilest of them all, and the intent and effect would have been no less clear. Telling four non-white members of Congress — American citizens all, three natural-born — to “go back” to the “countries” they “originally came from”? That’s racist to the core. It doesn’t matter what these representatives are for or against — and there’s plenty to criticize them for — it’s beyond the bounds of human decency. For anyone, not least a president.
it’s beyond the bounds of human decency
Yep. Absolutely.
In his penultimate paragraph, which I will not quote, Conway takes the Republicans who have remained silent to task, making clear that he views it as an act of cowardice.
But it is his final paragraph, with its clear dismissal of ANY rationalization  (judges, tax cuts, etc.) for supporting Trump, that rings loud and clearly, and absolutely sounds the appropriate alarm:
But none of that is good enough. Trump is not some random, embittered person in a parking lot — he’s the president of the United States. By virtue of his office, he speaks for the country. What’s at stake now is more important than judges or tax cuts or regulations or any policy issue of the day. What’s at stake are the nation’s ideals, its very soul.l.
What’s at stake are the nation’s ideals, its very soul.
We, all of us, need to make this very clear.
What kind of nation, what kind of society, are we willing to be?
What then does it require of us, ALL of us?
Posted by Angela Valenzuela at 4:08 PM