Here is an excellent analysis together with data sources from the Center for Information & Research on Civil Learning and Engagement (CIRCLE) of the 2020 election youth vote. Incidentally, most young voters (70 %) voted early/absentee. Key quote:

"The participation and overwhelming support for President-elect Joe Biden from youth of color was one of the defining elements of the election."

Explore our comprehensive data and analyses of youth participation and impact on the 2020 election.

Election Day served as the culmination of an unprecedented election cycle shaped by the COVID-19 pandemic, a nationwide movement for racial justice, and the boundless energy of young people who made their voices heard in the streets and at the ballot box. As our comprehensive data and analyses below make clear, young voters increased their turnout in 2020; they made the difference in key battleground states; and the participation and overwhelming support for President-elect Joe Biden from youth of color was one of the defining elements of the election.

Bookmark this page and check back for the latest. Follow us on Twitter @CivicYouth for frequent updates.

November 25 | 1:30 p.m. ET — The 2020 election took place during a global pandemic that required voters—including newly eligible voters like many young people—to navigate changing election processes and a unique campaign season. One way young people (ages 18-29) approached this electoral landscape was by voting early in massive numbers: our analysis found that more than 10 million youth cast ballots, either in person or by mail, before Election Day. At the same time, our pre-election research found that many young people lacked information about voting by mail, and our analysis of data from recent presidential elections highlighted that, among all age groups, young voters were the most likely to decide who to vote for later in the election cycle.

Most Youth Voted Early/Absentee, But Some Differences by Candidate Support & Race

A new CIRCLE analysis of AP VoteCast by The Associated Press allows us to paint a fuller picture of how and when youth voted in 2020 and when they decided who to vote for, both in comparison to older voters and to their same-age peers of a different race/ethnicity. We find that 70% of young people reported voting early/absentee and 30% reported voting on Election Day. Youth were more likely to cast a ballot early in person or by absentee ballot than voters ages 30-44 (65% early) and about the same as voters ages 45-64. Voters aged 65+ voted early or absentee at the highest rate (79%), perhaps due to concerns about their higher vulnerability to COVID-19.

As with older voters, among youth there was a substantial difference in method of casting a ballot by vote choice: 78% of young people who voted for President-elect Biden did so early/absentee, compared to 57% of those who chose President Trump. Because most of Trump’s youth support came from young white voters, that also contributed to differences by race/ethnicity: 66% of white youth voted early/absentee, compared to 79% of young Latinos and 91% of young Asian voters. We previously highlighted how Asian youth, who tend to be concentrated in states with a strong history of main-in voting, were highly likely to be more familiar with the process.

Note: Some survey data is limited in its ability to reliably represent all racial/ethnic groups. Some young people, namely Indigenous, Pacific Islander and Native Hawaiian, and multiracial youth, are not represented above due to a lack of reliable data.

But vote choice does not explain all the differences by race: young Black voters were the most likely to support Joe Biden but 30% voted on Election Day and 70% early/absentee—the second-lowest rate among the four racial/ethnic groups for which data is available. In a previous CIRCLE analysis, we found that, in 2016, Black youth had less experience with and information about mail-in voting, and that states with higher proportions of Black youth tended to have more restrictive vote-by-mail policies during the 2016 election.

Throughout the election cycle we underscored the importance of access to information about processes like vote by mail that may have been new or unfamiliar to young voters, and the challenges that would pose for groups like youth of color, youth who do not have any college experience, and others that have been traditionally marginalized in civic life. This new analysis of 2020 voters finds that, indeed, young people without any college experience voted early/absentee at a slightly lower rate (66%) than their peers with higher educational attainment. Among young white voters, 61% of those without college experience voted early/absentee, compared to 66% of youth with some college experience (no degree) and 73% of college graduates. 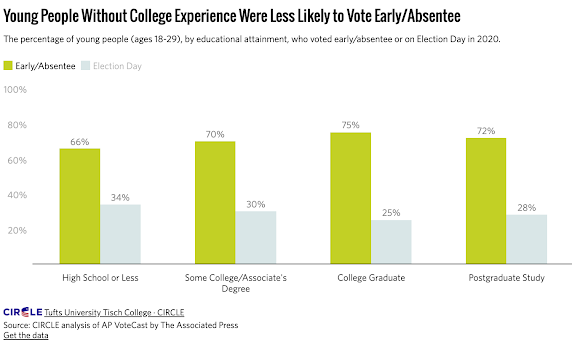 While a majority of young people voted early/absentee in 2020, young voters (ages 18-29) were the age group most likely to decide whom to vote for during the election season as opposed to having their mind made up from the start. According to CIRCLE analysis of the survey data, three-quarters of all voters (76%) said that they had their mind made up all along; that number was lower for young voters, and especially for youth of color (63%). The youngest group of eligible voters (ages 18-24) was also more likely to decide during the campaign, as were youth aged 18-29 who didn’t vote in 2018, which suggests both a need and an opportunity for campaigns to reach out to newly eligible and previously disengaged young voters who may have not made up their mind.

Another notable difference was between young supporters of Biden and Trump: 71% of youth who supported Biden said they had known all along who they would vote for, compared to 65% of youth who supported Trump. In our pre-election poll, we found that even some young people who intended to support President Trump had an unfavorable view of him, which may partially explain that they were still making up their mind throughout the campaign. There were also some differences by race/ethnicity and education—which, as highlighted above, may dovetail with differences by vote choice. Young white voters with some college experience (but no bachelor’s degree) were the most likely, among all subgroups by race/ethnicity and education, to say that they decided whom to vote for during the course of the campaign: 33% reported that’s when they made their choice. And, among both white youth and youth of color, young people with a postgraduate degree were the most likely to say that they knew whom they would vote for all along.

Interestingly, there did not seem to be a major relationship between when young people decided whom to vote for and whether they cast their ballot early on or Election Day. As our recent analyses have highlighted, this suggests that young people’s likelihood to vote is a matter of information about and access to early voting methods more than a matter of being undecided until Election Day.

Top Stories (NOTE: Go to CIRCLE website to link to these analyses. -Angela) 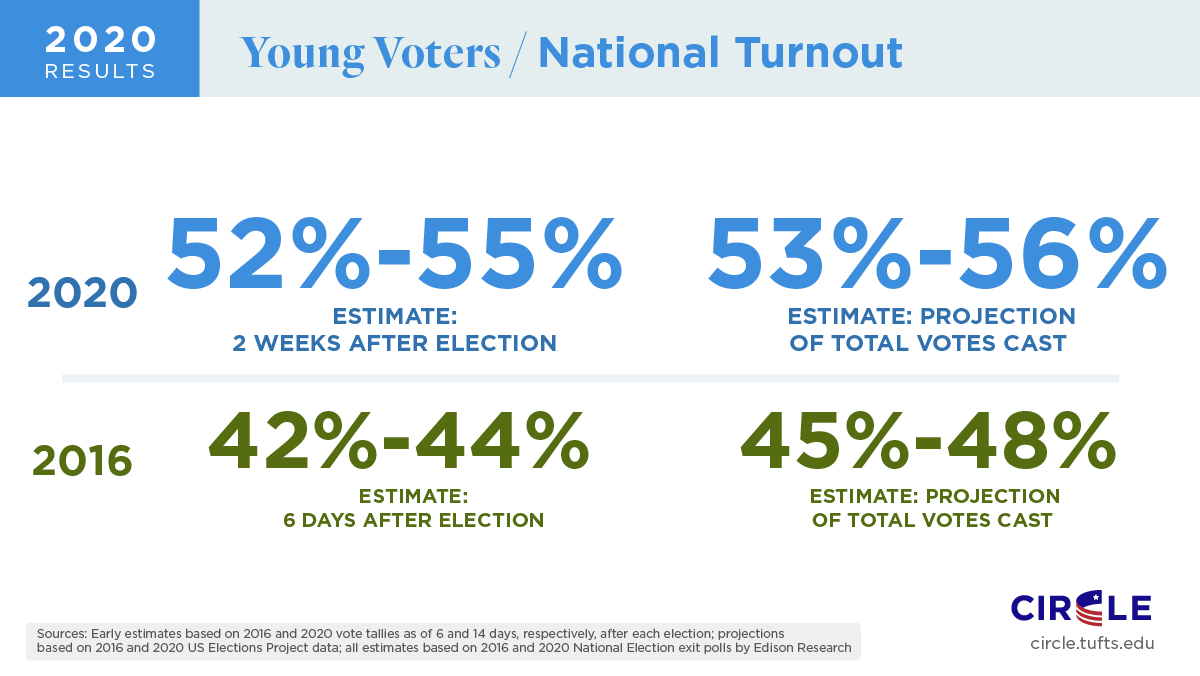 More about Young Voters in 2020

County by County, Youth Key to Biden Wins in the Midwest
The Youth Vote by Race and Education
The Black Youth Vote
The Latino Youth Vote
The Asian Youth Vote
Young Voters Concerned about Racism and Police Violence
The Views of Young Trump Voters
Did Youth Trust the Electoral Process?
The Impact of COVID-19 on Young Voters
The Top Issues that Drove Youth to the Polls
Black Youth Put Georgia in Play for Biden
Youth Share and the Impact of Youth of Color in Key States
Biden Did Better in Counties with Many Youth of Color
The Youth Vote Impact on Key Senate Races

What You Should Know about Young Voters 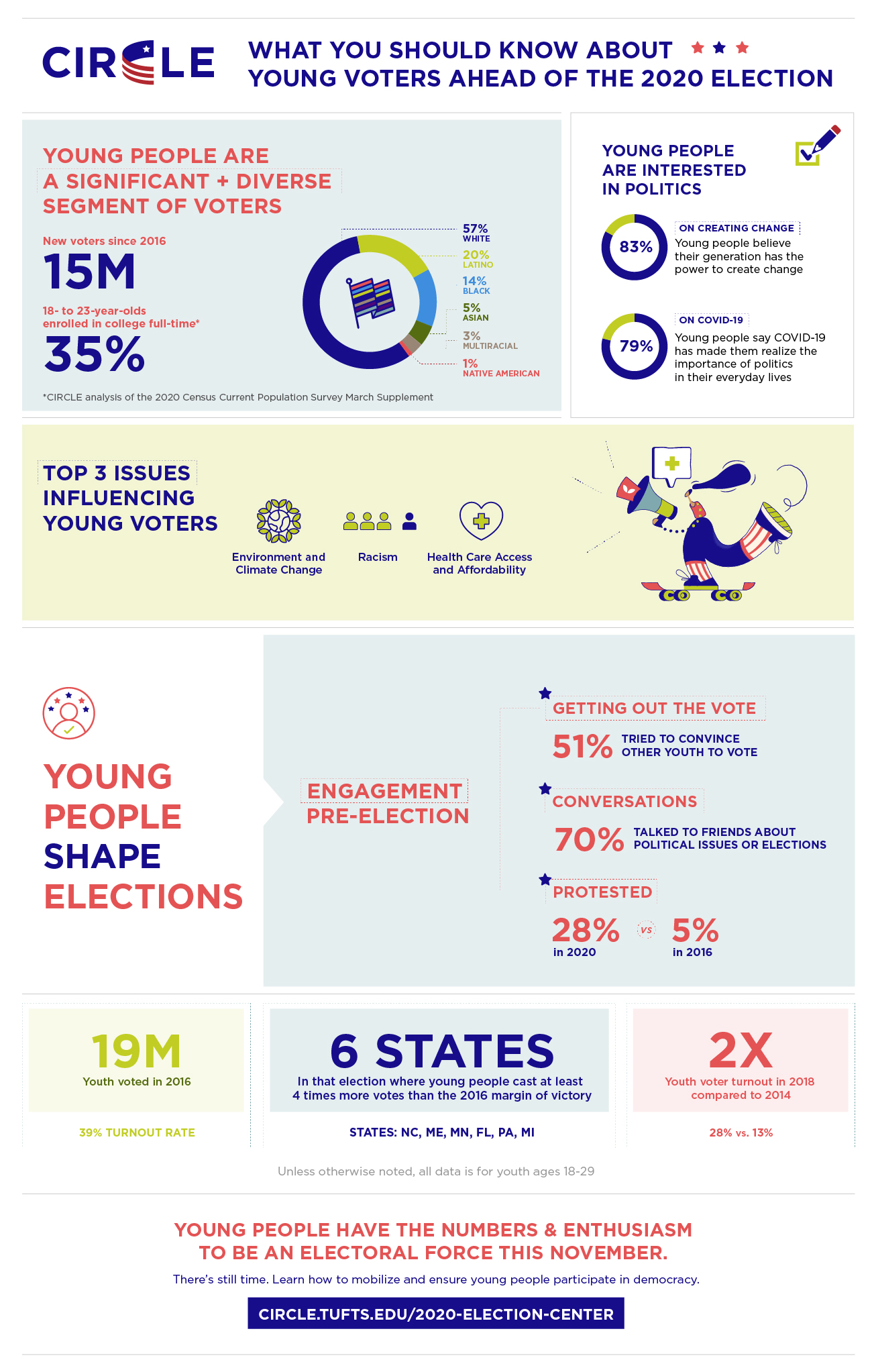 For more CIRCLE research from the entire 2020 election cycle, including the primaries, and our exclusive poll of young people, explore our 2020 Election Center.

Want the latest youth voting data in your inbox? Sign up to receive our monthly email.

CIRCLE experts are available throughout election week to discuss our data and analyses. Please email circle@tufts.edu with inquiries.

Posted by Angela Valenzuela at 10:59 AM