TIME MAGAZINE: Why It's a Mistake to Simplify the 'Latino Vote'

This piece from Time Magazine reiterates what many of us have been saying, namely, that the so-called "Latino vote" cannot be taken for granted, particular given their making up 18 percent of the population and are rapidly increasing in number, to boot. If you listen to the video that accompanies this story, they report that in Texas, over a half million new voters were Latino. By any measure, this is impressive and extraordinary

It's not at all accurate to say that they're uninformed when as journalist Cecilia Ballí also appropriately notes in her recent investigative report for Texas Monthly, there is meaningful complexity to this electorate that simply cannot be pigeon-holed.

Most analyses I'm reading these days of the Latino vote converges on a clear need for greater democratic party investment, organizing, and engagement of what truly is a diverse, and yes, energized Latino electorate. Pointedly, strategists and organizers need to address this specific pan-Ethnic diversity.

If the Democratic Party wants to enjoy long-term success, the answer is not to ignore or take Latina/os for granted, but rather to invest like the republicans have been doing through the "Libre Initiative," explaining to some degree the Republican Party's success in deep South Texas.

Why It's a Mistake to Simplify the 'Latino Vote' 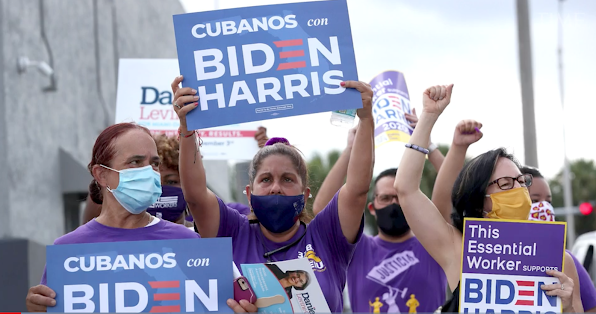 Ten years after political science professor Marisa Abrajano wrote about the false assumptions made towards Latino voters, political pundits and campaigns are still making the same mistakes in this election, she says. The assumption of a singular “Latino vote” is wrong, for one, and actually it should come as no surprise that Cuban Americans in Miami Dade voted for President Trump.
Latinos are not a monolith, and not one unified force. The differences between communities are vast and deep. The U.S. is home to an estimated nearly 61 million Latinos, according to the Pew Research Center, and range in age, race, gender, religion, socio-economic status, political ideology and educational attainment. Most are English proficient, and most were born in the U.S.
Despite these nuances, on Election Day the “Latino vote,” was analyzed as a single, unified entity by some political pundits, journalists and campaign officials without acknowledgment of the complexities of a demographic that makes up an estimated 18% of the U.S. population—a symptom of a wider trend of limited Latino outreach during political elections.
Latinos in the U.S. come from all parts of Latin America, Central America and Mexico. Some Latinos have lived in the U.S. for generations. There’s a variety of Spanish dialects, languages, foods, and traditions. It should come as no surprise that there are also differences in political ideology.
“The assumption is that Latinos are a monolithic group of voters, and the reality is that Latinos make up individuals hailing from more than a dozen different countries,” Abrajano, who teaches at UC San Diego, tells TIME. “The Latino vote in Florida is different from the Latino vote in California, and from Nevada, Arizona—and so to make broad strokes, or using this pan-ethnic term, can be problematic, and the same trend was evident 10 years ago.”
In the aftermath of Election Day, many took to social media to express their concern that analysts were painting Latinos with a broad brush. “It’s laughable that in 2020, this country still needs to be reminded, Sesame Street style, that Latinos are not a monolith & the Latino vote is a mirage,” wrote Los Angeles Times writer Esmeralda Bermudez in a Twitter thread. 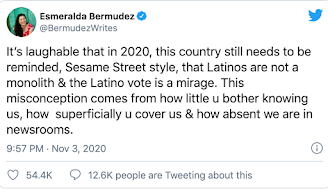 The original version of this story misstated the last name of Antonio Arellano, interim executive director of Jolt Action. It is Arellano, not Arrellano.

Posted by Angela Valenzuela at 1:05 PM