Open to the Public

This history-making, UT-AISD Ethnic Studies Summit is taking place on Friday, March 2, 2018, from 5-8:30PM, dinner reception included.  Please click here to RSVP.  Open to the public, this program aims to inform the community at UT about the first year of the Ethnic Studies roll out in AISD. Ethnic Studies is currently taught in 8 AISD schools and is already showing promising results to which this summit shall speak.

This summit seeks to provide a unique opportunity for Ethnic Studies faculty and students at UT to hear from AISD staff, faculty, and students on their experiences this year with implementing this novel program that plans to extend to all AISD high schools by 2018-19.

Acknowledgements:
The Texas Center for Education Policy (TCEP) at the University of Texas at Austin is very grateful to the following event co-sponsors: 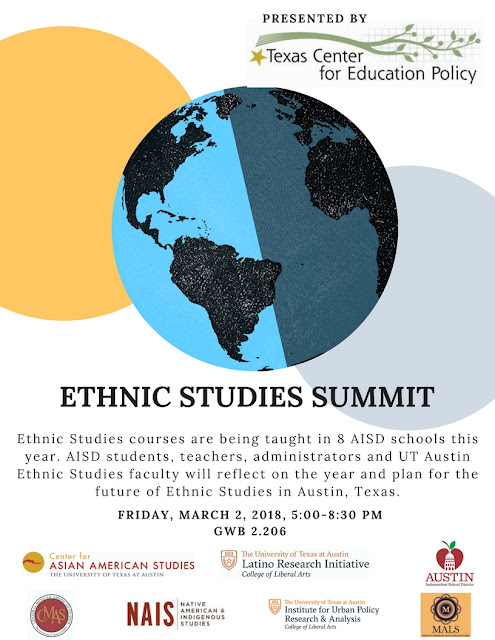 Posted by Angela Valenzuela at 12:27 PM No comments:

His early college campus was just recognized by the Texas Education Agency as "one of the nation’s top schools for low-income students."  As you can read for yourself below, he was one of two schools statewide that received this recognition.
graciously touch!

It is fitting that Macario Hernandez’s office at Dallas ISD’s Trini Garza Early College High School has a window that faces one of the school’s main thoroughfares. If a student or teacher needs a word, it’s easy to flag down Hernandez, the school’s principal, and pop in for a chat.
Those connections — built with students, parents and the Oak Cliff community — are what Hernandez points to when asked to describe his campus’ successes.
"Relationships are the foundation for everything we do on this campus," he said. "Being able to make a connection with that student, it's profound because you're vested in that student, vested in the community."
Located on the Mountain View College campus, Garza was selected by the Texas Education Agency as a National Title I Distinguished School, one of only two schools in the state to receive such a designation for the 2016-17 school year. The other is Houston ISD's charter Project Chrysalis Middle School.
The award, presented to Hernandez and three of his teachers by the National Title I Association earlier this month at a conference in Philadelphia, honors high-poverty schools that excel in student performance or closing achievement gaps. One of DISD’s first early college high school efforts, with a student body that’s 86 percent socio-economically disadvantaged, Garza was one of 34 schools across the nation to be praised “for exceptional student performance for two or more consecutive years.”


Posted by Angela Valenzuela at 10:44 PM No comments:

This teacher tried to simulate a dictatorship in her classroom. The students crushed her.

Here is a great experiment simulating a dictatorship in one teacher's classroom taught annually by Diana Leygerman as part of her George Orwell unit with students' reading of his classic text, Nineteen Eighty-Four—that all of us people of conscience must really read—or re-read—as it is so appropriate to these times.  However, this year, the experiment didn't work with Leygerman expressing in the strongest of terms that our generation has a lot to learn from new, powerful voices of young high school students who have well-organized, passionate views on the education to which they are simply entitled, among other things.

How encouraging as we think, in particular, about the amazing voices of high school students that are participating in DREAM Act struggles and more recently, gun policy involving youth activists from Florida in the wake of the tragic killings of 17 fellow students there.  Despite these difficult and horrific circumstances, this is assuring that the next generation will help to get us back on track in a world that otherwise seems to be spinning out of control.


This teacher tried to simulate a dictatorship in her classroom. The students crushed her.

Each year that I teach the book "1984" I turn my classroom into a totalitarian regime under the guise of the "common good."

I run a simulation in which I become a dictator. I tell my students that in order to battle "Senioritis," the teachers and admin have adapted an evidence-based strategy, a strategy that has "been implemented in many schools throughout the country and has had immense success." I hang posters with motivational quotes and falsified statistics, and provide a false narrative for the problem that is "Senioritis."

I tell the students that in order to help them succeed, I must implement strict classroom rules. They must raise their hand before doing anything at all, even when asking another student for a pencil. They lose points each time they don’t behave as expected. They gain points by reporting other students. If someone breaks the rule and I don’t see it, it’s the responsibility of the other students to let me know. Those students earn bonus points. I tell students that in order for this plan to work they must "trust the process and not question their teachers." This becomes a school-wide effort. The other teachers and admin join in.


I’ve done this experiment numerous times, and each year I have similar results. This year, however, was different.

This year, a handful of students did fall in line as always. The majority of students, however, rebelled.
By day two of the simulation, the students were contacting members of administration, writing letters, and creating protest posters. They were organizing against me and against the admin. They were stomping the hallways, refusing to do as they were told.
The president of the Student Government Association, whom I don’t even teach, wrote an email demanding an end to this "program." He wrote that this program is "simply fascism at its worst. Statements such as these are the base of a dictatorship rule, this school, as well as this country cannot and will not fall prey to these totalitarian behaviors."I did everything in my power to fight their rebellion.
I "bribed" the president of the SGA. I "forced" him to publicly "resign." And, yet, the students did not back down. They fought even harder. They were more vigilant. They became more organized. They found a new leader. They were more than ready to fight. They knew they would win in numbers.
I ended the experiment two days earlier than I had planned because their rebellion was so strong and overwhelming. For the first time since I’ve done this experiment, the students "won."


What I learned is this: Teenagers will be the ones to save us.

Just like Emma Gonzalez, the teen activist from Marjory Stoneman Douglas, my students did not back down nor conform. They fought for their rights. They won.
Adults can learn a lot from the teens of this generations. Adults are complacent, jaded, and disparaged. Teenagers are ignited, spirited, and take no prisoners. Do not squander their fight. They really are our future. Do not call them entitled. That entitlement is their drive and their passion. Do not get in their way. They will crush you.
Foster their rebellion. They are our best allies.

This story originally appeared on Medium.
Posted by Angela Valenzuela at 2:43 PM 1 comment: